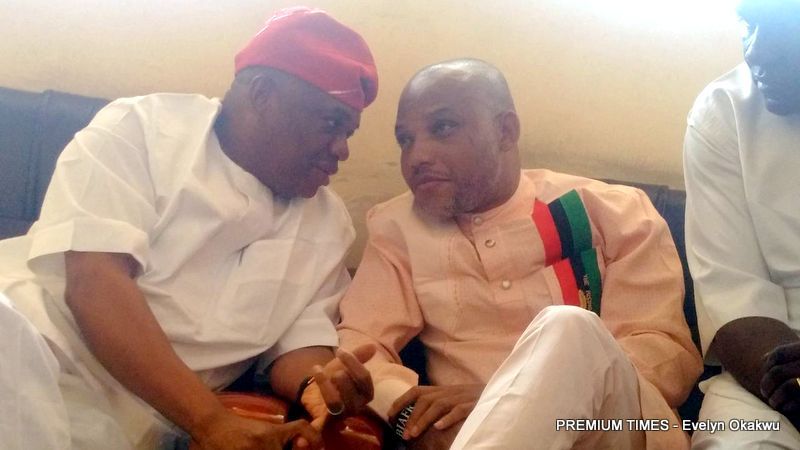 The leader of the Indigenous People of Biafra, IPOB, Nnamdi Kanu, yesterday, said he would never give up his agitation for the restoration of Biafra Republic, noting that he wants the reward for his agitation in this world and not when he dies and goes to heaven.

He also vowed to challenge his stringent bail conditions, saying they were unconstitutional.

Kanu spoke in Enugu when he paid a thank you visit to the leadership of the Eastern Consultative Assembly, ECA. The ECA appointed Kanu its leader in absentia when he was in detention in Kuje Prisons.

The IPOB leader was received by top members of the ECA, including Mrs. Okwor and Evangelist Elliot Ugochukwu-Ukoh, among others.

On those he left behind in the prisons, he said: “We are making efforts to see that they come out because they committed no crime. All we are seeking for is freedom; a return to the values we had before the advent of white men. A situation where people move their cows into our farms and slaughter our people will no longer be acceptable.”

Kanu’s scheduled visit to the Second Republic Vice President, Dr Alex Ekwueme, at Oko, Aguata in Anambra State for the same purpose was cancelled at the last minute due to alleged unforeseen circumstances.

He was also scheduled to visit President-General of Ohanaeze Ndigbo, Chief Nnia Nwodo, to express the same sentiments but the visit was postponed because Nwodo travelled to the United States of America, USA.

However, expressing his gratitude for the support showed to him by some Igbo leaders and groups, Kanu said he chose the option of fighting to liberate the people of Biafra, adding that there was no going back.

His words: “I have chosen the option that we must be free as a people; that we must be liberated as a race and that we must have every freedom due to us as given by God. I would not want to go to heaven before experiencing it; I want to experience it here.

“I thank all of you that worked very hard, especially the Igbo Youth Movement; I must be specific, and the Eastern Consultative Assembly and all the market men and women, those that closed their shops to see us and all those who made efforts to ensure that I was not consumed. I thank all of you.

On his stringent bail conditions, he described them as obnoxious and unconstitutional, vowing to challenge them in the days ahead.

The IPOB leader declined to speak with journalists, citing the bail conditions given to him by the high court.