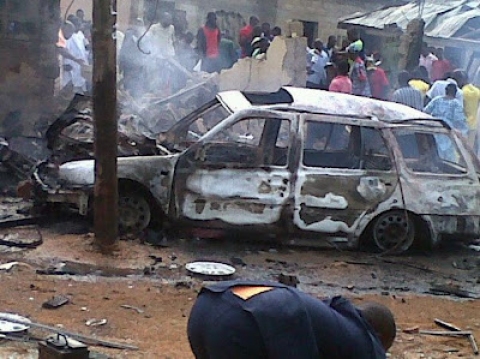 PREMIUM TIMES has obtained further details of the killings in the Talata Marafa town of Zamfara State, where eight residents were burnt to death by a mob suspected to be students of Abdu Gusau Polytechnic.

The details emerged just as President Muhammadu Buhari condemned the killings and promised justice for victims of the incident.

Some students of the polytechnic reportedly burnt down a house in which eight persons resident there were all burnt to death.

The president on Tuesday said via his twitter handle that he “received news of the mob killings in Zamfara with great dismay” calling it “barbaric and unacceptable.”

The President also tweeted “I assure that the law will take its course. My prayers are with the families of the victims.

“Under my watch we will work to ensure that there is no place for violence in the name of religion, ethnicity, or in any guise whatsoever,” he said.

How the incident occurred

PREMIUM TIMES spoke to a resident of Talata Mafara, Salisu Mafara on Tuesday. He said trouble began when a student of the Polytechnic was accused of blasphemy against Prophet Muhammad.

“The young man was a Muslim before he converted to Christianity and fellow students always accused him of saying nasty things about Islam.

“However, he reportedly said terrible things about the prophet and the students around descended on him and he was seriously injured,” he said.

Mr. Mafara said another resident of the town who speaks the same language with the accused student came to his rescue.

“When they noticed that he was not moving at all, they thought he was dead, but one man who is from the same tribe with him now came and took him to hospital in his car.

“When the mob got to know what happened, they now began to rush to the General Hospital. However, that man just dropped the boy in the hospital and left.

“But before the mob could reach the hospital, another young man, who is an indigene of Mafara, but is a boyfriend to the sister of the attacked student, reached the Hospital before them and took away the injured man before the mob got there.

“When they reached the hospital and realised that the injured man was not there they came back to town and when they saw the vehicle used in taking him to the Hospital the first time, they burnt it down.

“They also went to the man’s House and burnt it down with all the occupants inside. About eight people were in the house and they all died,” he said.

Mr. Mafara also said three other persons may have died when security agents opened fire on the crowd that became uncontrollable.

When contacted, the spokesperson of the Police in the state, Mohammed Shehu said a state security council meeting was held immediately after the incident and a dusk-to-dawn curfew imposed.

He also said security was heightened in the town and that everywhere was now calm.

He however, failed to confirm the burning of the house and the killing of occupants.

He said his attention was needed by the Commissioner of Police, Adoge Gabriel, and be abruptly ended the call.

Subsequent efforts to speak with him failed as he did not answer calls or respond to a text message.

A source in Talata Mafara also told us that Governor Abdulaziz Yari, who is from Talata Mafara, was in the town when the incident happened.

The government is however, yet to issue a statement on the incident.

However, the authorities of the Polytechnic has closed the school until further notice.

The Zamfara killing occurred two months after a woman was killed in Kano after she was accused of blasphemy, and a month after a female preacher was killing in the Kubwa area of Abuja by yet unknown persons.