The team that met with Sheikh Ibraheem Zakzaky comprises of four people,  three were Lawyers while one of them is a Member of the Islamic Movement in Nigeria ( IMN ). Mr. Femi Falana ( SAN ), Brr Maxwell Nkiyom, Brr Kabir Muhammad and Sheikh AbdulRahman Abubakar Yola made up the team. This team held consultation with Sheikh Zakzaky and sister Zeenat Ibraheem for upto one hour.

Sheikh AbdulRahman Abubakar Yola informed me that Sheikh Zakzaky and sister Zeenat Ibraheem are recovering from the multiple injuries that they suffered from the brutal attacks of the Nigerian Army. They undergone multiple surgical operations and there are more operations to be done especially to the left eye of Sheikh Zakzaky. 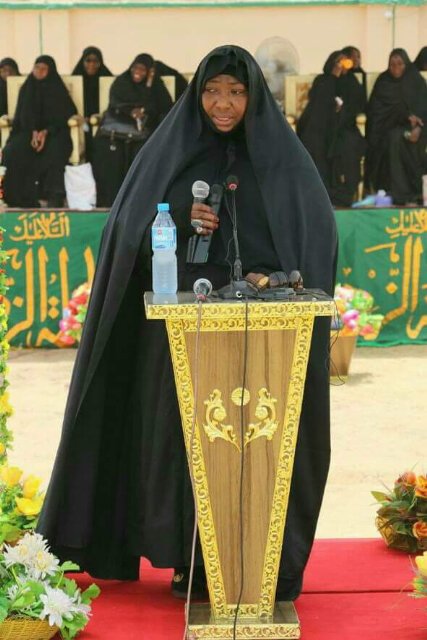 Due to the hotness of the flame the two boilers in the bathrooms melted and that was where Sheikh Zakzaky and his family spent the night with the protection of God and they totalled twelve (12). Some of those 12 were injured from stray bullets.

Then on Monday morning a spy that was planted in the house brought the Nigerian Army to the house and showed them the section where Sheikh Zakzaky and his family took refuge. The moment the Nigerian Army arrived they opened fire on the group of 12, the 3 sons of Sheikh Zakzaky, Humaid, Hammad and Ali Haider (who was a living Martyr after suffering mortal injury in the 2014 Nigerian Army attacks where his 3 brothers were brutally killed) were brutally killed execution – style on the spot.

The legal counsel of Sheikh Ibraheem #Zakzaky under the leadership of Activist-lawyer Femi Falana (SAN) yesterday wrote a letter to the Director-General, Department of State Services ( DSS ) and has demanded the unconditional release of leader of the Islamic Movement of Nigeria (IMN) Sheikh Ibraheem Zakzaky and his wife, Hajia Zeenat Ibraheem from unlawful detention.

Falana said last December 12, thousands of armed soldiers allegedly unleashed violent attacks on IMN members in Zaria, Kaduna State on the orders of the Chief of Army Staff, General Tukur Buratai who claimed that the unarmed civilians wanted to “assassinate” him.

The lawyer said although his clients were not at the scene of the attack, the rampaging troops invaded their residence at Wali Street, Zaria last December 14. “The troops set the building ablaze and killed three of our clients’ children in their presence and thereby subjected them to untold mental agony.

The important points to note from the Falana statement are:

-The continued detention of Sheikh Zakzaky and his wife by the Nigerian regime is illegal and unconstitutional and therefore they should be release.

– Sheikh Ibraheem Zakzaky and members of the IMN have resolved not to participate in the proceedings of the said Judicial Commission of Enquiry in any manner whatsoever and howsoever.

-IMN can not present the true health condition of Sheikh Zakzaky and his wife since their personal Physicians are denied access to them by the oppressive Nigerian regime. But for an innocent man that was showered with bullets by the Nigerian Army while  his 3 sons where brutally murdered in his presence, we should expect the worst. But what is important is that Sheikh Zakzaky and his wife are alive.

-The legal team of #IMN on behalf of the families of those killed, injured and brutalized by the Nigerian Army will initiate court cases against the bloodthirsty criminals who carried out that massacres in Nigerian courts. And the submission to the International Criminal Court ( ICC ) will also continue.

Finally, the IMN will seek justice in both Nigerian and International courts of law for the gross injustice of the inhuman #Zaria_Massacre. Nigerians should disregard the malicious, wicked and evil propaganda of the Nigerian regime that IMN had formed a strategic alliance with the murderous #BokoHaram terrorism to attack military formations and government buildings. IMN is guided by the eternal message and teachings of Islam that categorically condemned all acts of terrorism in whatever form or guise.