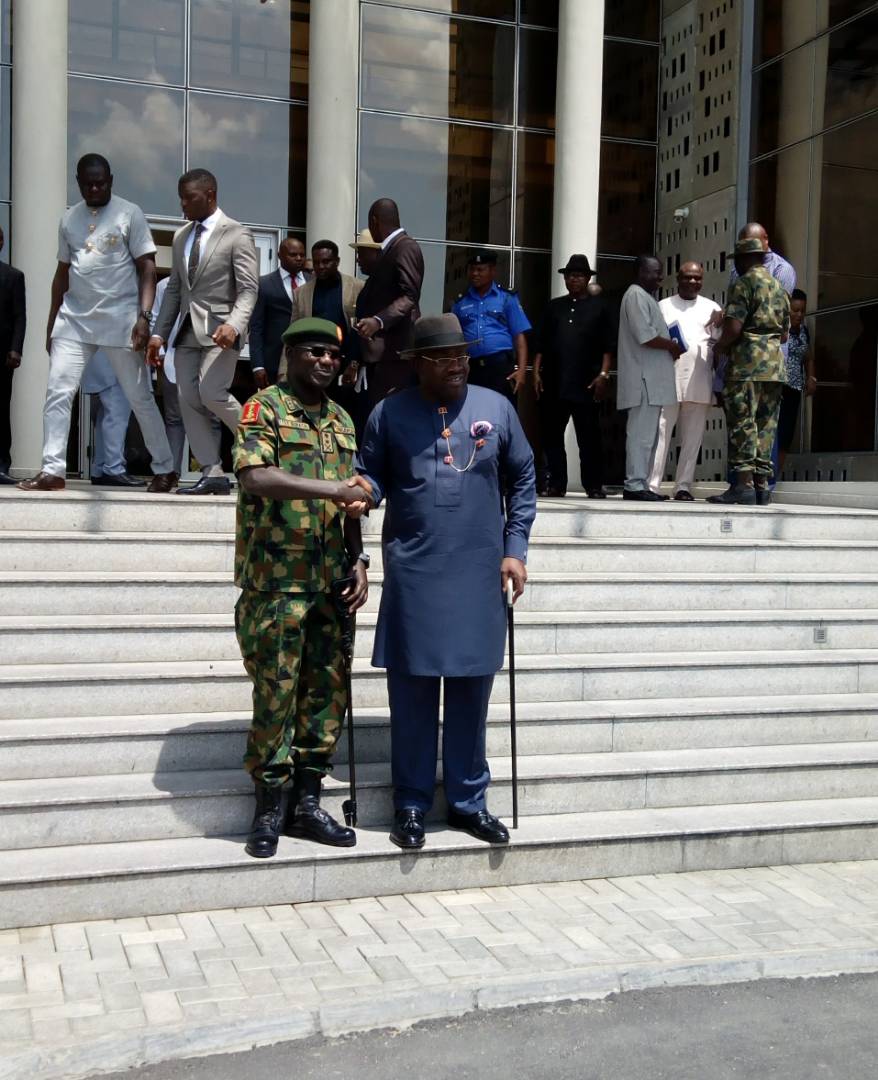 The Chief of Army Staff, Lt. Col. Tukur Yusuf Buratai who is on a working visit to the state to officially conduct the ground breaking ceremony of the 16th brigade command barracks, paid a courtesy call to Hon. Henry Seriake Dickson at the Government House Yenagoa this day the 5th of March 2018.

In his brief remark, the army chief who arrived yesterday, extolled the Governor’s numerous developmental strides in infrastructure, health, education and security as well as the contributions of the his administration to the Nigerian Army. The Chief of Army Staff commended the governor for supporting the establishment and take-off of the 16th brigade command barracks.

In his words, the ground breaking ceremony officially commences the operations of the 16th brigade command in the state of which the Bayelsa State Government immensely contributed to.

Lt. Col. Buratai also mentioned that the brigade will host the military engineering unit as well as health and educational facilities.

In his response, Governor Dickson on behalf of the government and people of the state welcomed the Chief to the state. The governor also thanked him for the support,  encouragement and collaboration between the unit and state.

The governor thanked the army chief for their partnership with the State in the area of engineering as evident in the Agge deep sea port project as well as their partnership in the educational sector which for the first time has produced an Army Children School in Bayelsa State.

The governor also expressed commendation at the professionalism and leadership of the army chief and his colleagues in protecting the intergrity of the nation and called for support for the army.

‘Our State is one of the safest states in the region. This is due to the clear-headed leadership and professionalism of the security agencies and the mobilisation of communities and the citizenry’

‘The aspiration of my government grounded on security,  is to make Bayelsa the foremost investment and tourism hub. We have already achieved this in the educational and health sectors being products of our six years of clear headed leadership’

‘If we must tackle militancy, we must invest in education and provide skills for our youths to compete favourably in an ever increasing global economy.’

The event was attended by top government officials and traditional rulers from across the state.