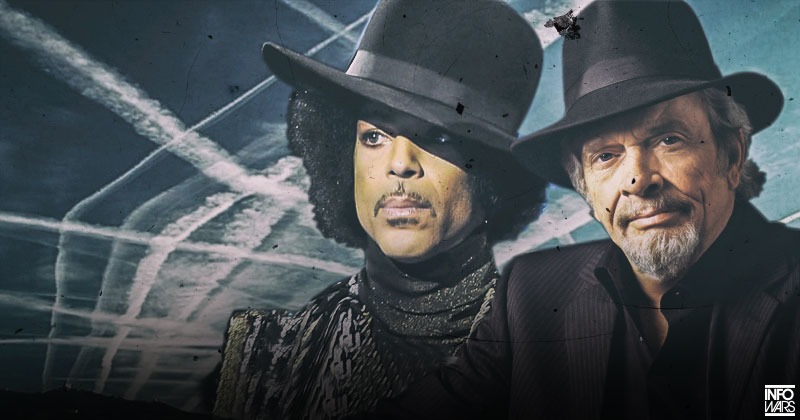 The artist known as Prince has died suddenly of a mysterious illness, just like Merle Haggard, and both men previously spoke out against chemtrails many have suggested are responsible for a surge in respiratory illnesses.

“The singer — full name Prince Rogers Nelson — had a medical emergency on April 15th that forced his private jet to make an emergency landing in Illinois, but he appeared at a concert the next day to assure his fans he was okay,” TMZ reported April 21. “His people told TMZ he was battling the flu.”

A mysterious illness has been spreading across the U.S., coinciding with massive chemtrail spraying – and it’s possible the two are linked.

Prince even spoke out against chemtrails during an interview with late night host Tavis Smiley:

And so did Haggard, who passed away April 6 from a lung infection:

“What I hate is looking up and seeing chemtrails in a clear blue sky today,” Haggard sang.

But are chemtrails real?

“If you go outside on a clear day and look up toward the sun —being careful to block out the bright disk with your thumb — you might see a hazy white region surrounding our star,” the Smithsonian Magazine revealed. “This haze is caused by airplanes, and it is gradually whitening blue skies, says Charles Long of NOAA’s Earth System Research Laboratory in Boulder, Colo.”

“We might be actually conducting some unintentional geoengineering here,’ Long said at a press conference this week at the American Geophysical Union Fall Meeting in San Francisco.”

In other words, chemicals added to airplane fuel are dispersed from the plane’s exhaust into the atmosphere – and eventually find their way to the ground, which may explain why some farmers are discovering increased aluminum content in the soil.

“As a contrail dissipates, it leaves behind a thin, icy haze,” the magazine continued. “The sky may appear cloud free, but the particles are there until they fall out of the atmosphere, and while in the sky, they scatter the sun’s light in a similar way as in the proposed geoengineering projects.” IW