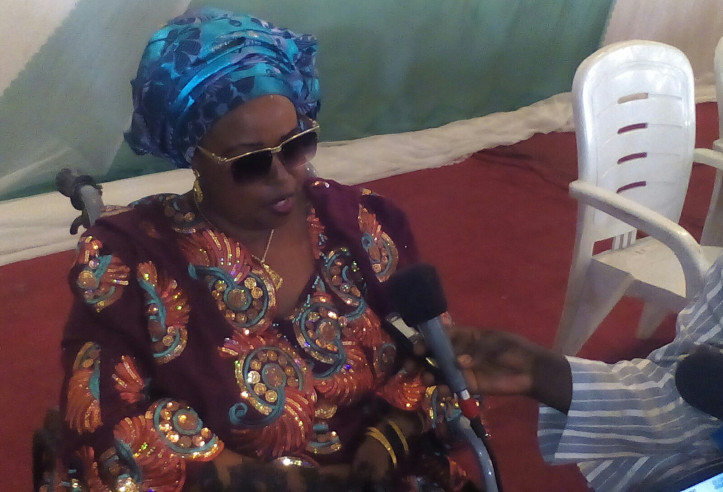 Indigenes of Kaduna state with disabilities have passionately appeal to the Governor of Kaduna State Mallam Nasir el-Rufai to always include the physically challenged people in it’s list of students send on scholarship to overseas.
A HND graduating student of Nuhu Bamali polytechnic, and leader of the physically challenge persons in Zaria, Comrade Shanshuddeen Abdullahimade the appeal in an interview at the graduating ceremony of 1000 trainees of Shaadiya Isah Suleiman Foundation held in kaduna on weekend.
Shamshuddeen who is also one of the beneficiary of the training programme of the foundation expressed dissatisfaction over the increased disparity and gender differences displayed by the state government, adding that both kaduna state and federal government appointees in charge of people with disabilities are trying, but that their best are not enough.
He said “their are a lots intelligent, talented, skillful and brains among disable persons in kaduna and Nigeria  that would excel if given opportunity their counterparts in other countries in Europe and America.

Shamshudden expressed surprise that “Whenever it comes to sending students scholarship abroad on scholarship, the government always abandoned them, because there wasn’t any chances given to any physically challenged person to go and study in abroad like what the government are doing.

He said, “We are more skillful and intelligent” stressing that “among us there are more intellectuals than those ones the government is selecting and sending to broad for study.
“I’m begging kaduna state government to stop showing us differences because we are also kaduna state citizens, we need scholarship to  further our studies abroad”, he said.
He also added that, given them scholarship to study abroad would encouraged most of the street beggars to abandoned begging and go back to school, and therefore called on governor el-rufai to always remember putting the physically challenged  person among the students given scholarship for outside country.
Speaking to journalists earlier, at Gamji multipurpose Hall, venue of graduation ceremony of 1000  trainees, the proprietress and founder of the foundation Shaadiya Isah Suleiman who is a cripple woman, said, knowing what’s going through, she was motivated to establish the foundation to assist in training people with disabilities, Widows, orphans, beggars and less privileged in the society like herself to earn better living for themselves.
Founded and funded through prayers, Hajiya Suleiman said she noticed with greatest surprised  that people who lost their breed winners end up as beggar or as house girls, without education, hence, the reason for setting up foundation “two years ago beginning with 200 – 1000 trainee currently.
In a speech, Musa Zubairu Usman stated that the importance of the skills acquisition cannot be over stressed to human existence individually and nationally, and therefore appealed to beneficiaries not to compromise standards and quality of their products in other excel.
Also in an interview the father of the day and peace ambassador Evangelist pastor Buru Yohanna, said for a physically challenged woman to establish a foundation of this nature to assist others deserved greater support from and sundry especially Philanthropist, government and NGOs to do more and prayed God to support her for the noble course of bringing food to the table of the poorest.
The high points of the events include colourful display of the products of apprentice trainees and presentations of awards of certificates to the 1,000 trainees, who thanks the Hajiya Suleiman and called for support for the foundation to enable it trains more people on what they described as free 3-6 months  skills training.