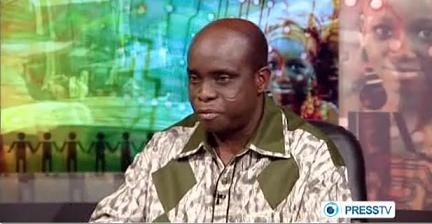 The US is focusing on African nations to force economic imperialism upon these fragile economies to join with its unilateral oil embargo against trading with Iran.

This course of action by America comes despite the backfire effect the same move had on the demands of developed European nations causing several eurozone countries to require exemptions.

Press TV has conducted an interview with Mr. Baffour Ankomah, Editor of the New African magazine in London about Western political influence on African leaders and the sovereignty and independence in decision making of Africa as a continent.

Also on the program are interviews with Martin Koyabe, Co-founder of Kenya Overseas Business Alliance, London; and by phone with Professor Okey Onyejekwe from the Center for Sustainable Governance in Lagos. Click here to watch video

The following is an approximate transcription of the interview.

Press TV: Kenya hasn’t taken a position in the middle, has it – It is actually agreeing with the US even if it is by default?

Ankomah: Exactly. So … Where is the sovereignty? Kenya is a sovereign nation. If they are going to cave in like this, one day the Americans are going to say we do not like the faces of your wives so have nothing to do with them.

And remember, at the time that Africa needed the Western nations most during the apartheid era, they didn’t support us.

They in fact helped the white supremacists in South Africa to get a bomb, a nuclear bomb. The Americans and the British and their allies gave the South Africans the expertise; and the bomb they were producing was not meant for the elephants in the Kruger National Park, it was meant for us.

So, why can’t (Kenyan) President Mwai Kibaki get it that our national interests come first? If we can get cheap oil from Iran, so be it.

Press TV: Let’s remind our guests about the reasons for the sanctions if I could quote a British foreign office spokesperson who recently said, “Concerted pressure by the international community sends a strong message to Iran that it must take steps to demonstrate its nuclear program is for peaceful purposes.”

Is this a condition that could ever really be met, or is it as some have analyzed a bit of a red herring to ensure that the US maintains its dominance in the nuclear field?

I don’t think Iran can ever meet their conditions. In any case, do we say the British nuclear program is for peaceful purposes? The American side is the only people on earth who have actually used atomic weapons on human beings…

Press TV: So has America shown that the purpose of its nuclear program is peaceful?

As we speak they are still developing their latest generation nuclear weapons… Remember we are Africans. The Europeans were able to defeat us and colonize our land because they had bigger weapons, that’s all. Not because they are in any way superior to us; they have bigger weapons.

So even to this day, the latter-day Americans and Europeans are following these templates.

You have nuclear weapons, we have Ak-47s and bows and arrows, so they come that’s all.

Press TV: And also talking about a template that had been set in the past, you know, everyone knows about the European industrial revolution being built on African blood and all the different trade trails that happened to ensure that happened including the enslavement of human beings.

But also another insidious aspect, which we’ll discuss in part two of the show is how America is spreading its wings through its military operations in the continent that nobody seems to be challenging to any great depth.

Do you have strong concerns about the squeeze of neo-colonialism at this point in time? Is this what you see is happening?

Ankomah: Yes. That’s why perhaps the Africans stood as one and refused to have the headquarters of AFRICOM right on the continent, but now they are based in Germany and they are doing things that are not very conducive to us. Look at Kenya, they say don’t do it. Next time it will be Ghana it will be Nigeria, so… where do we stand.

Press TV: Well, Tanzania couldn’t do it. Zanzibar is backing off very carefully…

Ankomah: So what’s next? One day we will wake up and the Americans will say we don’t like the face of your wife, don’t do anything with her and what do we do? We can’t win. Africa must stand as one. We must stand as one while we have so many nations.

Press TV: From Professor Onyejekwe’s comments, on the issue of fragmentation and sovereignty in Africa and resisting Western pressure, a depressing analysis, but realistic is it not?

Ankomah: It is realistic, but we can do something. Remember in 2009 the AU (African Union) decided on the issue of Africa, as a continent, we are not going to cooperate with the ICC (International Criminal Court).

Press TV: The statement professor Onyejekwe was saying about Mugabe going it by himself – that’s really the key, there are very few who can have the strength to stand alone.

Do you think in the course of time as more African nations become aware of America’s impact that more Mugabes are likely to arise?

Ankomah: Exactly and it’s true. In developed countries you can withstand the pressure that will come from the EU or from the USA. I have visited Zimbabwe a lot and they’ve suffered. And in regard to Mugabe behind the scenes the African nations have supported him politically. They have. Behind the scenes they did, he is not standing alone.

But if say the whole continent of Africa, the AU, they decide that we should be free to deal or trade with any country we want as a collective because individually they can pick us off. – PressTv