Popular journalist and professor Farooq A. Kperogi, Ph.D. and presidential spokesman Garba Shehu are in a sticky brawl.

It all started with Farooq A. Kperogi’s column piece, ‘“ChangeBeginsWithMe” Campaign as a Bait-and-Switch Scam,’ which appeared in DailyTrust among other dailies.

In the piece, Farook made mention of President Buhari’s trip to the U.K for an ear problem, referencing the figure of “6 million pounds,” the trip cost according to the Vanguard and other estimates.

“To boot, he took the presidential air fleet along with him to London, and cost the nation, by some accounts (which haven’t been disproved by the presidency), 6 million pounds. That’s more than the money allocated to all Nigerian hospitals in the current budget! Just for an ear infection!”

And also posted on his wall in reflection of the inserted image on “Change” by Isa Pantami, the following passage: 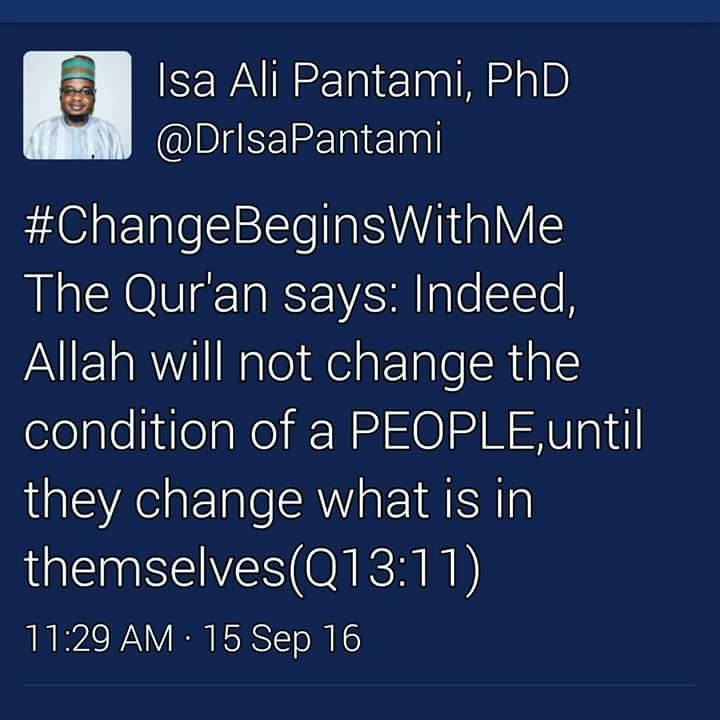 Precisely! I agree with Dr. Pantami. As student union leaders in BUK in the early 1990s we used this verse to mobilize students to take ownership of their lives and fight injustice. You shouldn’t sit listlessly and watch a president who got elected on the promise of change live in the lavish luxuries of the past while the people he governs starve and die. A president who promised you change went to London, spent 6 million pounds (that’s up to 3 billion naira) just to treat an ear infection when all Nigerian teaching hospitals combined were allocated less than 3 billion naira in the budget–and when he budgeted up to 4 billion naira for Aso Rock Clinic that he doesn’t even use AND after he banned all government officials from traveling abroad for medical treatment. We should fight to change this. Allah will not change this for us until we change the self-annihilating stupidity in us that allows us to think that it’s OK for leaders to lie and cheat and exploit the masses so long as the leaders share the same region and religion as us. Allah will not change our condition until we purge ourselves of the predilection to ignore home truths, evade uncomfortable facts, dwell in sentimental escapism, and attack purveyors of home truths and uncomfortable facts. This is a great verse, and I thank Dr. Pantami for bringing it to our attention again.

Professor Kperogi further defended his claims as it received reactions:

I didn’t make up the allegation that Buhari spent 6 million pounds to treat his ear infection. It’s been around since June. It was even reported in the Vanguard of June 9. Now, I am the first to admit that Vanguard isn’t always a reliable source of news (I have written at least two scathing articles on Vanguard), but it’s also true that Vanguard is Nigeria’s most visited online news source, outranked occasionally only by Punch, according to Alexa. You ignore it at your own risk. The presidency must be aware of this allegation. Why haven’t they denied it and set the records straight? Well, it’s probably because they didn’t or don’t want to lend wings to an embarrassing revelation. If they were never aware of this allegation until I brought it up in my column and status update, then they are more clueless than I thought. OK, read: http://www.vanguardngr.com/2016/06/don-faults-pmb-foreign-medical-trip/

This earned him the wrath of Garba Shehu who claimed the treatment cost under 50,000 GBP in medical bills while failing to mention what the plane ride cost Nigeria’s pocket.

In Response to Prof. Farooq Kperogi

The disclosure on Prof. Farooq Kperogi’s wall that President Muhammadu Buhari’s ear treatment in the United Kingdom cost a whopping six million pounds must have shocked many of the respected scholar’s followers.

The story reads like an incredible tale by moonlight that belongs to a different era, which fortunately is now history. That’s when a fortunate lady saved USD15 million for medical treatment!

But was it possible that the account of this balanced journalism teacher was hacked?

I will give him the benefit of the doubt.

Given the austere president we have, Muhammadu Buhari would not have approved this amount if he was shown a six million Pounds bill. I won’t be surprised if the President may have asked if the fat bill was for the purchase of a brand new pair of ears!

I’m prepared to share documents with Farooq, one of the brightest ever produced from the Bayero University Kano (BUK) that the whole treatment, including a follow-up visit by a specialist to Nigeria didn’t cost 50,000 pounds.

For the records, the administration advanced a higher sum, but the President’s doctor returned the balance to the treasury.

Indeed, it’s a New Day, and President Buhari’s change mantra is real. Let no one confuse my fellow countrymen and women.

The President’s spokesman put the cost of medical treatment as under 50,000 GBP, but did not yet open up on the total cost of taking the Nigerian presidential jet and entourage to the U.K. for the 11-day medical break.

Malam Garba Shehu was my teacher. In fact, as I wrote in one of my columns, he is one of the best teachers I’ve ever had in my entire life. Ironically, he taught me most of the things I know today, including speaking truth to power and holding government accountable to the people through journalism. I didn’t make up the allegation that Buhari spent 6 million pounds to treat his ear infection. It’s been around since June. It was even reported in the Vanguard of June 9. Now, I am the first to admit that Vanguard isn’t always a reliable source of news (I have written at least two scathing articles on Vanguard), but it’s also true that Vanguard is Nigeria’s most visited online news source, outranked occasionally only by Punch, according to Alexa. You ignore it at your own risk. It’s hard to believe that the presidency is only just now learning about the allegation after I brought it up in my column and status update. Well, here is it, my esteemed former teacher: http://www.vanguardngr.com/…/don-faults-pmb-foreign…/