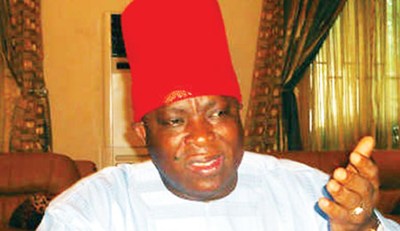 FORMER National Chairman of All Progressives Grand Alliance, APGA, and its candidate in the Anambra Central senatorial election, Chief Victor Umeh, has allegedly been arrested by men of the Department of State Services, DSS, over perceived support for the Indigenous People of Biafra, IPOB.

It was gathered that Umeh was invited to the headquarters of DSS at Amawbia at about 9 .00 am and after about two hours, was taken out of the office in a pick-up van en-route Abuja.

Vanguard gathered that the security officials were said to have received petitions that Umeh was among those supporting the pro-Biafra agitators whose leader, Mr. Nnamdi Kanu, is still being detained by the security operatives. A source close to Umeh said: “I am right now at Aguluzigbo, the country home of Chief Victor Umeh. His wife told me that he was arrested in the morning by men of the