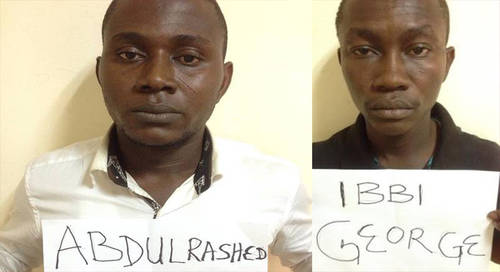 SaharaReporters has discovered that the police have yet to prosecute any of the Department of State Service (DSS) agents arrested for their role in last November’s robbery of a foreign exchange haulage truck containing over N310 million in Abuja.

The agents were attached to Senate President Bukola Saraki’s security detail at the time they executed the dastardly heist on November 20.

Mr. Saraki, in a press release circulated only to select editors and newspapers, confirmed at the time that DSS agents attached to him were involved in the heist, but denied the money they stole was for him.

DSS spokesman, Tony Opuiyo confirmed the names of the agents involved in the heist in a press release.

He stated that “the sum of three hundred and ten million naira (N310m) belonging to a Bureau De Change (BDC) operator in Abuja” was being shared. In the statement, Mr. Opuiyo also confirmed that Mr. Magari “conspired with his four other colleagues.”

Shortly after SaharaReporters revealed the full details of the heist, the Commissioner of Police for the Federal Capital Territory Abuja, Wilson Inalegwo, said investigation had commenced but claimed the money that was stolen did not belong to the Senate President.

According to police sources which spoke with SaharaReporters, the robbery, which took place only about five minutes from Mr. Saraki’s Abuja residence, has now been moved to the Police Force headquarters.  One Okon Okon, an Assistant Police Commissioner of Police in charge of the criminal investigation at the FCT police command, told SaharaReporters that the case had to be “moved’ to Force CID for better and further investigation because those involved are national security agents.

It remains baffling why officials engaging in crime at the local level cannot be charged considering the FCT Commissioner’s position in December that investigation had already been concluded and that the FCT would charge the DSS officers involved, who include a military officer. A lawyer speaking anonymously with our reporter describe as “utter rubbish” the position of the FCT police saying that FCT police command has some of the best prosecutors and investigator as well as courts that are frequently used to prosecute federal government officials involved in criminal activities.

A phone call to the Force Public Relations Officer, Adebisi Kolawole, regarding the status of the case at the Force HQ, was not returned.

While it is clear that no charges or prosecutions have been filed for any crime associated with the heist, our investigation has revealed that top aides of Mr. Saraki and Lawal Daura, the Director-General of DSS, along with Mr. Saraki himself, have been trying to cover up the crime.

SaharaReporters revealed in December 2015 that Mr. Saraki’s DSS aides orchestrated the heist to grab some of the money the Senate President was using to bribe judges to quash his impending trial for false asset declaration and corruption.

Saraki had called on a BDC owner, who a relative of former Head of State, Abdusalam Abubakar, to bring to his house the sum of N1billion from a nearby bank.  The BDC owner was instructed to use his own security as Saraki couldn’t trust that President Muhammadu Buhari and his agents were not spying on him.

Things took a different turn when Saraki’s DSS detail, who had monitored the cash transfer conversations over some days, decided to hijack the money.  They reportedly took a part of the cash and let the BDC agent take the rest to Saraki.