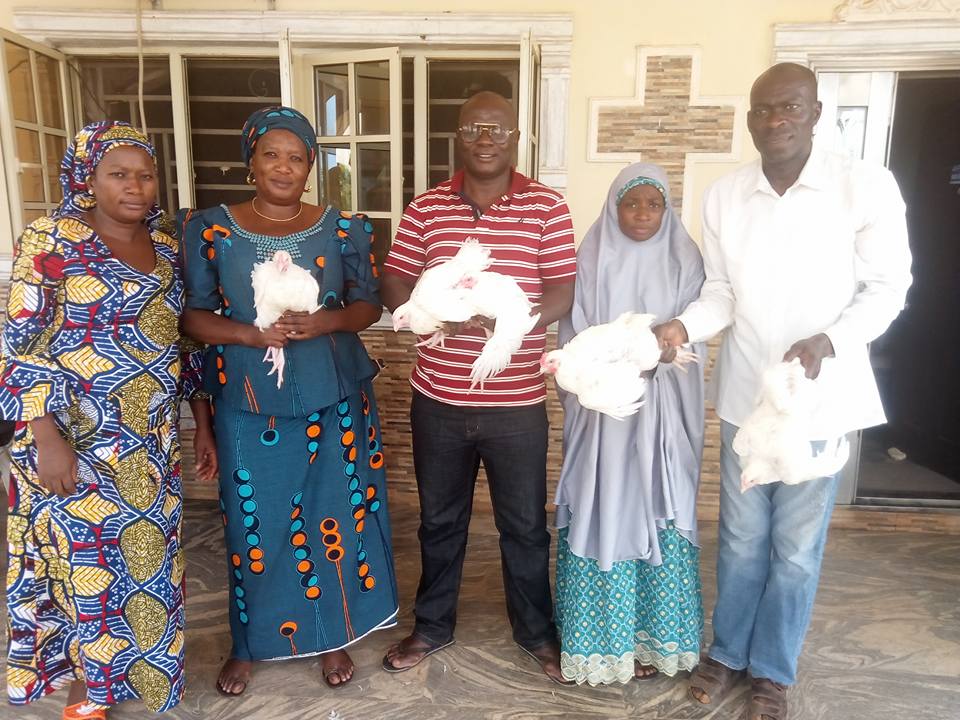 In an effort to promote peace, religious tolerance and better understanding among different faith base organization in northern Nigeria, Hajiya Ramatu tijjani  a peace activist in the region  has distributed large number of  children’s  to widows and church orphans with the aims of seeing them happy while celebrating the Easter season

Ramatu who is a peace builder and interfaith promoter in Nigeria west Africa said,as Christians world-wide are finishing their 40 days fasting and prayers throughout the  holy weeks ,there is need to support the widows with chickens and other food stuff,so as to enabled them celebrate the Easters  periods  with joy, and  happiness like any other Christians round the world.

According to her due to the hardship,and economic recession not all widows would be able  to cook food and make their children Happy during the seasons,

She said,she commences  the chickens  distribution with the church of Christ evangelical and life intervention ministry sabon Tasha kaduna south,simply because of her Good rapport and friendship with all the members of the church,and hoping to spread the gifts to other neighboring  churches in kaduna north,  with the aims of promoting peace and unity and to spread the messages of interfaith among the two religious followers.

The peace ambassador also pointed out that ” there is joy in given out  to the neediest  ,as givers never lack, because Gift-giving is one of the good manners that maintains and strengthens relations between the giver and the recipient.”

She says , last year during the 6 weeks Lenten period, she bail out 10 Christians youth in Kaduna convict prison, so as to enables them go back home and do their fasting at home with friends, family, and other relatives, with joy and happiness like every other Christians round the world. According to her this is a method of promoting peace building, inter-religious tolerance and better understanding among different faith base organization in Nigeria.

Ramatu also noted that, ”we are worshipping One God Allah, and both muslims and Christians are from one Family(brothers and sister), and both have their holy Books which are Bibles and Qur’an, both believed in paradise and hell, so there for, we are all one family under One God.”

She says, the impact of the previous  ethno religious and political crises in the state that claimed hundreds of lives and properties was a serious setback to peaceful co-existence in Kaduna and northern Nigeria at large, hence the need for clerics from both religions to preach sermons that foster unity and peaceful co-existence.

She said,as Christian celebrate Easter  this weekend ,she wishes every Christian peace and Happiniess,while calling on wealthy individuals to also assist the poor widows and orphans with food and news cloths,in other to celebrate the season with joy”lets be our brothers keepers, lets unite Nigerian,and lets join hands in helping our brothers and sisters toward making Nigeria a better place.”

The peace activist says,she is going to distribute other food items to other widows,”My joy is to see every women happily celebrating with her children.”

She then concluded by saying ,she  is going to also cooks and distribute the food item to some Christians  inmate  in Mallam Nigger house,so as to enabled the inmate have a good taste of food and other drinks.

While calling on federal and state government to provide adequate security in all the 36 states during and after the Easter period,in other to avert all forms of security threat

Receiving the Gift, the General Overseer of Christ Evangelical Intercessory Fellowship Ministry, Pastor Yohanna Buru, thanked Hajiya Tijjani for the gesture and urged other Nigerians to learn how to tolerate, accommodate and live in peace with one another irrespective of religious background.

Pastor Buru also called on all citizens to shun all issues that lead to ethno-religious and political crisis.

He stressed that it is time all preachers redoubled their efforts in teaching their followers the right ways and obey the teaching of the holy books so as to end the activities of extremists and terrorists hiding under religion.