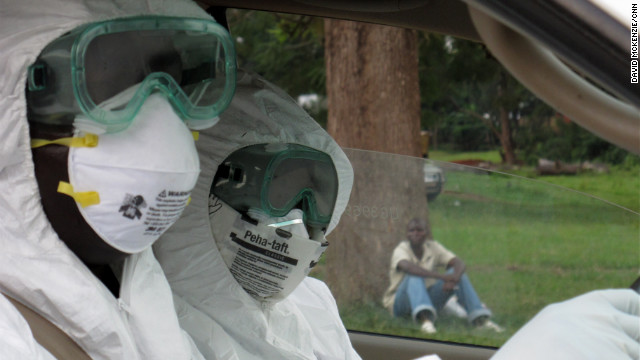 Kagadi, Uganda (CNN) — One of five prisoners receiving treatment for a suspected case of Ebola virus in Uganda escaped overnight Friday from the hospital at the center of the outbreak, a health official said.

“Should his results come back and he is positive, that causes us a lot of worry. So right now, we have resolved that the remaining prisoners will be cuffed on the beds for fear that they might also escape,” said Dr. Jackson Amune, commissioner at the Ministry of Health.

The inmates from Kibaale prison are among 30 people at Kagadi hospital with suspected cases of the virus. Two additional patients have confirmed cases, according to Doctors Without Borders.

Many patients fled Kagadi hospital when Ebola was confirmed, he said, and the facility is struggling to respond to all the call-outs to suspected cases.

The outbreak began in the Kibaale district in western Uganda with 53 confirmed cases. At least 16 people have died. An additional 312 people have suspected cases of the virus and have been isolated, pending further testing.

The deaths have stoked heightened fear of the virus, a highly infectious, often fatal agent spread through direct contact with bodily fluids. Symptoms can include fever, vomiting, diarrhea, abdominal pain, headache, a measles-like rash, red eyes and, at times, bleeding from body openings.

“I would like to stress that the disease is under control,” said Joaquim Saweka, the World Health Organization representative to Uganda.

Health officials urged the public to report any suspected cases, to avoid contact with anyone infected and to wear gloves and masks while disinfecting bedding and clothing of infected people. Officials also advised avoiding public gatherings in the affected district.

Teams in Uganda are taking an aggressive approach, including trying to track down anyone who came into contact with patients infected with the virus, and health workers have been gearing up to protect themselves and deal with an influx of cases.

The workers include people from Uganda’s Ministry of Health, the U.S. Centers for Disease Control and Prevention, and the World Health Organization.

Meanwhile, officials in Kenya were taking extra precautions after at least two patients showed symptoms of the virus, according to Jackstone Omoto, a medical official in Siaya, western Kenya. One man tested negative. A second man and two relatives have been isolated at the Moi Teaching & Referral Hospital in Eldoret, pending test results. The man was traveling from South Sudan to Kenya through Uganda.

“We are tracing the bus that he (traveled on), and we have requested the company to contact the ministry so we can know who else was in the bus,” said Beth Mugo, public health minister.

The Ebola virus was first detected in 1976 in the central African nation of Zaire (now the Democratic Republic of the Congo). The virus is named after a river in that country. There are five strains of the virus, all named after the areas where they were found: Zaire, Sudan, Cote d’Ivoire, Bundibugyo and Reston, according to the WHO.