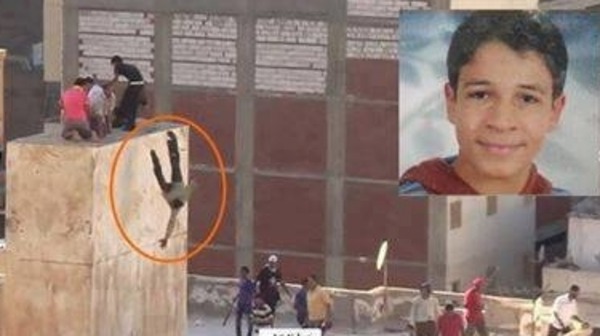 The story yesterday of the two boys pushed off of a water tower onto the roof of a residential building has an update and corrections. The building was in Sidi Jaber, perhaps a bedroom community to Alexandria or a neighborhood. The video showed two boys thrown off the tower, but the person(s) posting the video said four (4) “Armin” boys were killed. According to Alaribiya.English.net, the two seen in the video were the only boys involved. One boy lived and one died. The one who died, Hamada Badr, was 19 years old. He was the first to be pushed and a man dressed in black delivered what looked to be a brutal blow to Hamada’s head after he hit concrete. The second boy reportedly survived. Note the man with the al-Qaeda flag in his pocket walking on the rooftop.

The boy was identified as Hamada Badr, inset in featured image. 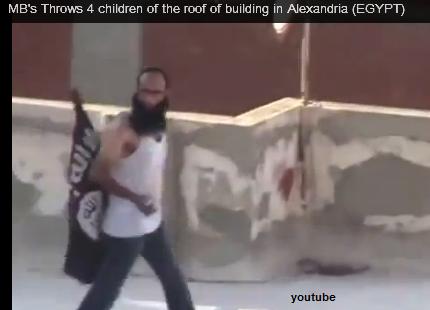 One of the young men was killed. He was identified as the 19-year-old Hamada Badr. Activists say he was celebrating Mursi’s ouster when he came into encounter with Muslim Brotherhood supporters.

Father of the slain teen said the pro-Mursi Islamists wanted to take vengeance against Hamada and his two other friends, because they were throwing bricks off the building against the Islamist crowds surrounding it at the time.

On Sunday, authorities in Alexandria said that it will deploy its security forces after Islamist groups such as the Muslim Brotherhood, from which Mursi hails, called for a protest in Sidi Jaber. Source: Alaribiya (emphasis mine)

Read the original report and view the graphic video here.