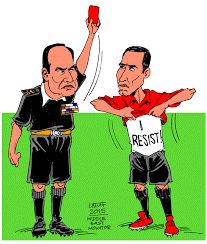 Egypt may be inching towards a return to the stands of soccer fans, who played a key role in the 2011 toppling of President Hosni Mubarak and have been barred entry into stadiums for much of the last five years.

International matches have been largely exempted from the ban to shield the government from potential accusations of responsibility for the poor performance of an Egyptian squad because it lacked the support in the stadium of its supporters.

Next week’s Al Ahli match is however likely to be a litmus test because it will be attended by 15,000 fans, the highest number since the ban was imposed on the eve of the 2011 popular revolt. The government has moreover harked back to an initial understanding first reached in 2013 but never implemented in which the interior ministry, clubs and militant fans agreed that security forces would be replaced in stadiums by private security firms.

“A private security company will be in charge of the stands. This match will be another step forward towards the full return of spectators to Egyptian stadiums,” said Al Ahli executive Sherin Shams.

The ministry’s consent to the use of private security companies, many of which are managed by former senior military officials, constituted implicit recognition that the country’s brutal, unreformed security forces are as much part of Egypt’s security problems as they are part of its solution.

The consent also appears likely to be an effort by the ministry and the security forces to shore up their tarnished images. In internal memos leaked to journalists earlier this year, interior ministry officials called for the boosting of the ministry’s media image and monitoring capabilities, including the hosting by popular television shows of former police generals and stepped-up monitoring of news websites on a 24-hour basis.

Egypt’s security forces have long been one of the country’s most despised institutions. Almost weekly clashes with security forces during soccer seasons in the years before Mr. Mubarak’s downfall turned militant fans, who played a key role in the revolt as well as most anti-government protests since, into one of Egypt’s foremost social movements.

More than 70 Al Ahli fans were killed in 2012 in a stadium in the Suez Canal city of Port Said in a politically loaded brawl that was widely seen as an attempt by the security forces and the military to cut the fans down to size that got out of hand. Last year, 20 supporters of Al Ahli rival Al Zamalek SC died in clashes with security forces outside a Cairo stadium.

Fans in April forced their way into a stadium in protest against the ban on supporters attending football matches. At the Borg Al Arab stadium in the Mediterranean city of Alexandria, Ultras Ahlawy stormed the pitch during an African Championship match against the backdrop of growing criticism of general-turned-president Abdel Fattah Al-Sisi and protests against his handing over to Saudi Arabia of two islands in the Red Sea during a visit to Cairo in May by Saudi King Salman.

The protesters, although far smaller in number than those that toppled Mubarak, adapted the slogans of the 2011 popular revolt: calls of “Bread, freedom – the islands are Egyptian!” replaced the 2011 revolt’s “Bread, freedom and justice.” An Egyptian court this month ruled against the return of the islands.

Continued clashes with fans who repeatedly have over the years targeted the interior ministry have persuaded Mr. Al-Sisi to move government offices out of the centre of Cairo.

Mr. Al-Sisi recently inaugurated a new office of the Interior Ministry at the Police Academy in New Cairo, east of the Egyptian capital. The academy joined the prosecutor-general, state security, and judicial bodies in an effort to deprive protesters of symbols at a time of mounting discontent.

“The security situation is connected to the targeting of these institutions by a number of protesters centred in downtown Cairo. They seek to spread chaos throughout the country, especially after the demonstrations became unfortunately chaotic themselves. And they’re attempting to break the aura of authority around state institutions by putting them under siege, covering their walls with graffiti of vulgar images and language degrading to those who work there… The security challenges the country is going through have forced the ministry to accelerate its construction plans,” General Ahmad al-Badry, the former head of the Police Academy, told Al Monitor during the inauguration.

General Badry’s acknowledgement of the street power of the fans followed an unprecedented bid in February by Mr. Al-Sisi, who heads one of the most repressive governments in recent Egyptian history, to reach out to his opponents.

In his government’s initial recognition of the power of the fans, Mr. Al-Sisi phoned in to a television programme on the fourth anniversary of the Port Said incident to invite militant fans to appoint ten of their members to independently investigate the incident.

It was the first time Mr. Al-Sisi reached out to his opponents, many of whom have been killed by the interior ministry’s security forces, forced underground or into exile, or are lingering in prisons where they risk abuse and torture.

Ultras Ahlawy declined the invitation saying it could not be accuser and judge at the same time but kept the door to a dialogue open.