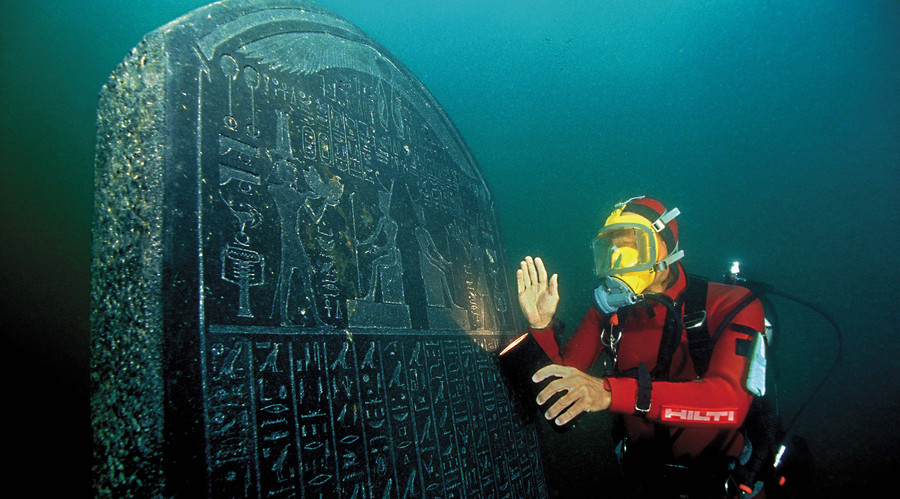 Objects from two lost underwater cities recently discovered off the Egyptian coast are being revealed to the public in a “blockbuster” British Museum exhibition.

Underwater: The ruins of Thonis-Heracleion were found in 2000 in the Mediteranean sea near Alexandria. #archeology pic.twitter.com/gKqLF5CKoG

French underwater archaeologist Franck Goddio first discovered Thonis-Heracleion and Canopus, submerged at the mouth of the River Nile, in 2000 – over 1,000 years after they were swallowed by the Mediterranean and covered in sand.

The exhibition will feature more than 200 spectacularly preserved finds from the ancient cities, including a 5.4 meter-high (17.7 ft) granite statue of the Nile flood God, Hapy, and a 1,200-year-old statue of the Greek Goddess, Isis.

Goddio, president of the European Institute for Underwater Archaeology (which he founded in 1987), excavated over a dozen historic shipwrecks before turning his attention to uncovering Egypt’s lost world – equivalent in size to that of Paris – in 1996.

However, Goddio’s work is far from over – the 68-year-old estimates he’s uncovered only 5 percent of the sunken world so far.

“Pompeii is a very small city. They started archaeological excavation there in the 18th century – and it is still not excavated fully. Thonis-Heracleion covers an area that is three times the size of Pompeii,” Goddio told the Telegraph.

Adore this image of the Stela of Thonis-Heracleion being raised from the Bay of Abukir pic.twitter.com/gZj0l7VjMZ

What led to the demise of the cites is still not known, although Goddio told the Guardian they “most probably disappeared because of seismic causes”.

This is the museum’s first major exhibition dedicated to underwater archaeology and promises to “transform our understanding” of the intricate relationship between Greek and Egyptian history. The exhibition will run for six months from May 19 to November 27.