Kaduna State governor has been demonstrated to have chosen very vocal, radical fanatic Shiaphobics in his “Justice” committee on the recent pogrom in Zaria where as many as 1000 minority Muslims were killed and the leader of the faithfuls and his wife and others kidnapped by the government.

An example of such very vocal anti-Shia selected panel commissioner that we discovered is Professor Salisu Shehu. Suspiciously appearing to be initiating or prompting the Islamic movement persecution agenda, on his facebook posts exactly 5 days ahead of the Zaria December pogrom Professor Shehu condemned “Shia” Muslims and any associated country in more ways than one, even getting upset that they have freedom of worship in Nigeria. He is suspected to have been behind the massacre action and behind pushing governor El-Rufai to demolish Islamic movement structures and exhume the graves of the persecuted minority Muslims. He is so radical and desperate at it, Salisu claimed Hezbollah and Israel are an alliance, playing games. A Nigerian professor teaching in the natio’s academic institutions who makes such public posts!…also saying that America is Iran’s best ally.

The translation of Professor Salisu Shehu’s comments as posted in Hausa below:

Commenting on the alliance between Muslim countries and the United States.

Alliance between the United States and Europe on one hand, and their alliance with Muslim countries on the other hand are on different levels. Some of their allies are visible, and some are not.
While Saudi Arabia publicly appears to be United States ally, Iran is being an ally in closed doors. They are deceiving people by publicly appearing to be the one standing against the United States and challenging them while it’s nothing but a lie and deceit.
The land of Israel and the United States have no closer ally in the Middle East like Iran. It will be very hard for the United States to wage a war against Iran its closest ally, let no man be deceived or get confused by what is happening between Hizbush- Shaitan and Israel’s wars and attacks, because it is nothing but a staged play and a way to convince people that they are against each other.
Below are some references and proof that will confirm what i said:

Also among the most important records and the new American motives clearly shows how ready it is to support the spread of Shi’ism. Because as the data showed, Shi’ism should be held more dearly rather than the remaining sect in Islam. It should be the one they give their full support.
This is the reason shi’ites are getting more comfortable in many countries but hardly the United States complain about the spread of Shi’ism . As we can clearly see in many countries like Nigeria, they have no respect for the rules and regulations of the country, they do whatever they feel like doing without thinking of the impact or the implications of their actions. Whoever have any doubts about what was said should read this book:
2. CIVIL DEMOCRATIC ISLAM: PARTNER, RECOURSES AND STRATEGIES By Cheryl Bernand, RAND Corporation version.
NO MATTER HOW LONG THE TRUTH ALWAYS EMERGE. 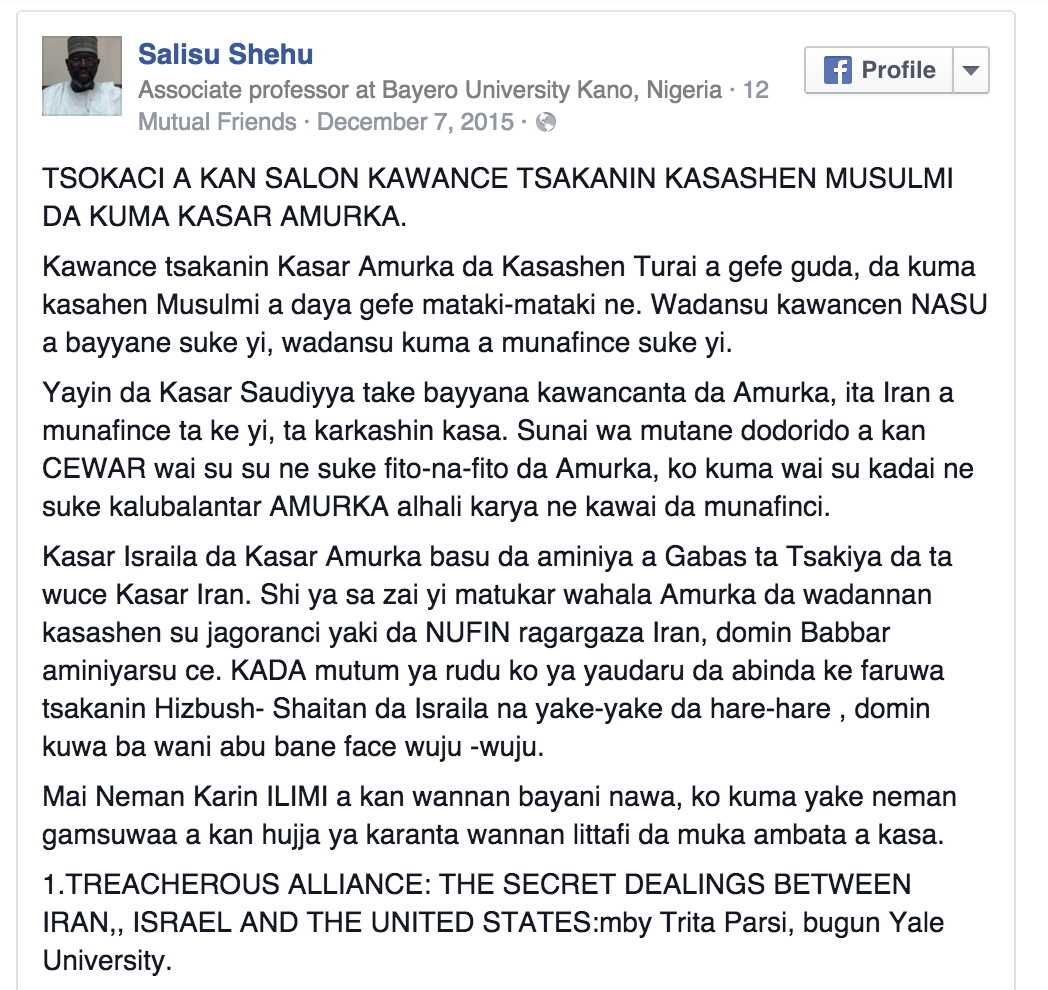 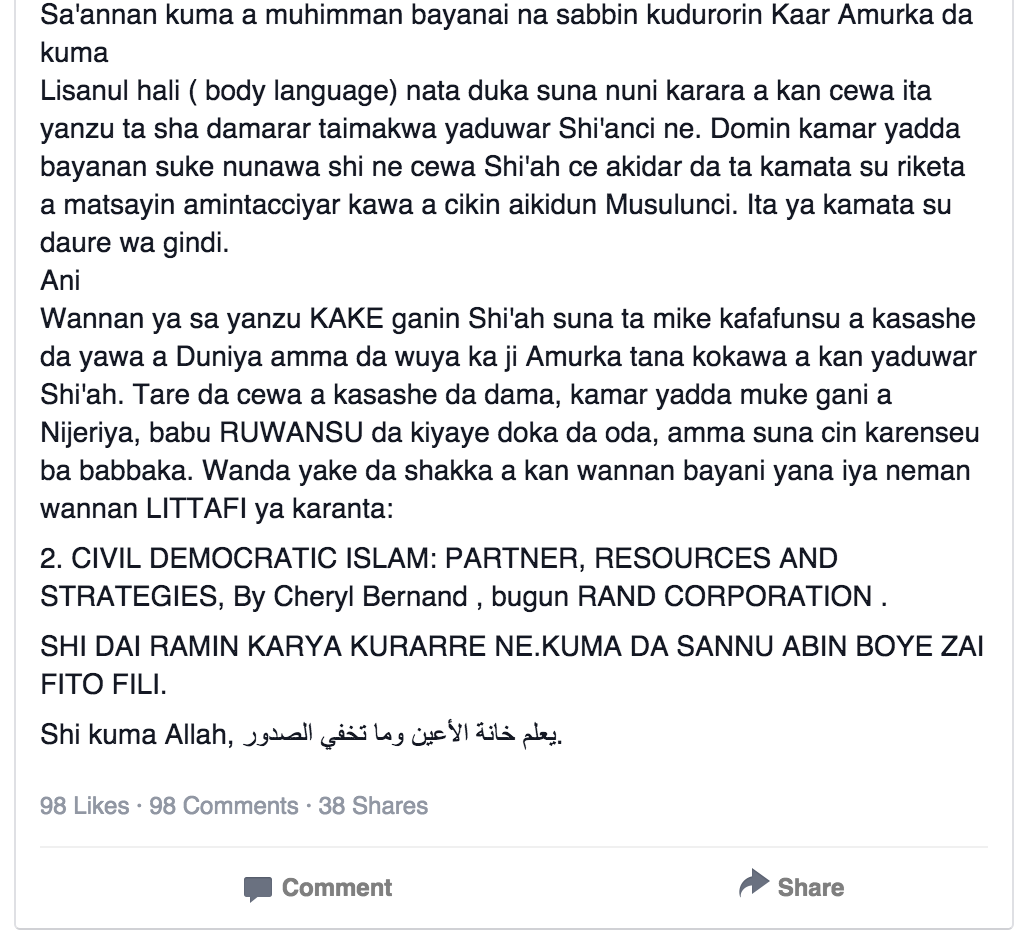 Professor Salisu Shehu celebrated his appointment and asked for prayers in a post: 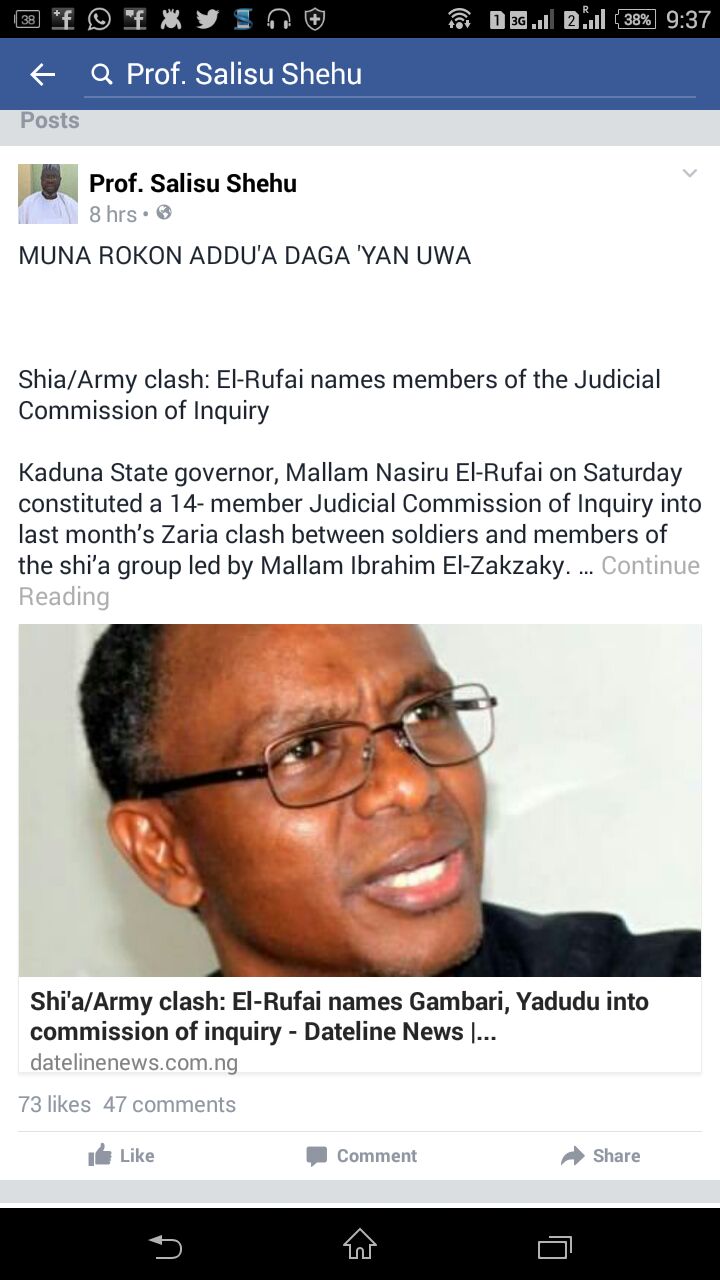