On Tuesday, 30th November 2010, Gabriel Ewepu in his article titled Traditional Institution in Nation Building opined that; “government comes and goes but the traditional institution has remained an integral framework of our history and the bedrock of our nation’s democracy. No government can work harmoniously without the assistance of the tradition institutions because these institutions have remained the pulse of the people and an enduring part of our cultural heritage, No society progresses without defined cultural norms and values which regulate the activities of its people.

Politically, looking at the history of Africa shows that countries without defined structures for the traditional institution do not last and are much prone to wars and civil strife. In Nigeria governments come and go with pronouncements and promises without doing anything tangible to resuscitate the rights of the royal fathers which has been bastardized over the years by politicians merely for their selfish gains. lt is only when there are crises or a problem that we realize the importance of the institution as a rallying point for Nigerians.

But if the truth must be told, it should not be so. Nigeria should have been able to emulate civilized societies like Great Britain, China Japan, Indonesia, Malaysia etc. and our next door neighbour Ghana that has a legislative chambers for both local and upper cadre for traditional rulers.

Issues like security, dispute resolution, health, education, sanitation, social development and judicial authorities and both the issue of land which has become the bane of the Nigerian society are all in the kitty of traditional rulers.

The institution had all the powers to coordinate information regarding any issue from their various clan heads or emirs and this information were processed to avail peaceful co-existence and mutual love for one another in their respective domains.

Funds were given to traditional rulers including the authority for the security of lives and property were also part of the administrative responsibilities of traditional rulers and at no time were there any misgivings or breakdown of law and order.

But after the colonial masters left and Nigeria became independent, the political few started seeing the need to aggregate power to themselves by stripping the traditional institution of their legal rights and obligations and today Nigeria is worse for it.

Howbeit, the traditional institution in Nigeria have become an important part of the life of Nigerians and forms the bedrock of the political experience of many Nigerians; They elicit greater confidence and legitimacy in the eyes of the ordinary Nigerians than the institution of the modern state because of their belief of being their brother’s keeper at all times.”

This is not far from truth. Every individual who lives in the African setting will concur with these.

In Kaduna State, prior to 2001, there were 10 Emirates/Chiefdoms with 76 districts and 1,407 village units. After communal clash that consumed hundreds of lives and in order to solve the age-long cries of domination by mostly the communities in southern parts of the state, the then Governor; Ahmed Mohammed Makarfi; set up a committee whose recommendations captured the need for creation of more Emirates/Chiefdoms in the state. This gave birth to creation of additional 22 Emirates/Chiefdoms, 314 districts and 4,475 village units. In addition to the communal clash and domination cries, expansion and rapid population rise were other factors that led to this increase. This is done in order not to keep district heads far away from their subjects.

The present administration under Nasir El-Rufa’i failed to recognize the importance of this institution and the key role it plays in ensuring security of lives and properties. His one and only reason is that government can no longer afford to cater for the needs of this institution. Little known to many that what is spent in settling the Institution’s remuneration per annum is not anywhere close to what the governor spends in paying jamboree to Senior Special Advisers (SSAs), Special Advisers (SAs), Technical Assistants (TAs) and Executive Assistants (EAs) within his cabinet.

While the monthly a remuneration of District Heads (390 x 25,000) totals N9.75m, our findings revealed that Kaduna State Government spends N23.043m monthly to pay remuneration of SSAs, SAs, and TAs (see graph attached). Half of this amount almost doubled the meagre N9.75m required to settle remuneration of these district heads. This further clears the air that fund is not the reason why El-Rufai want to reduce the number of districts in the state but some other reasons best known to him. 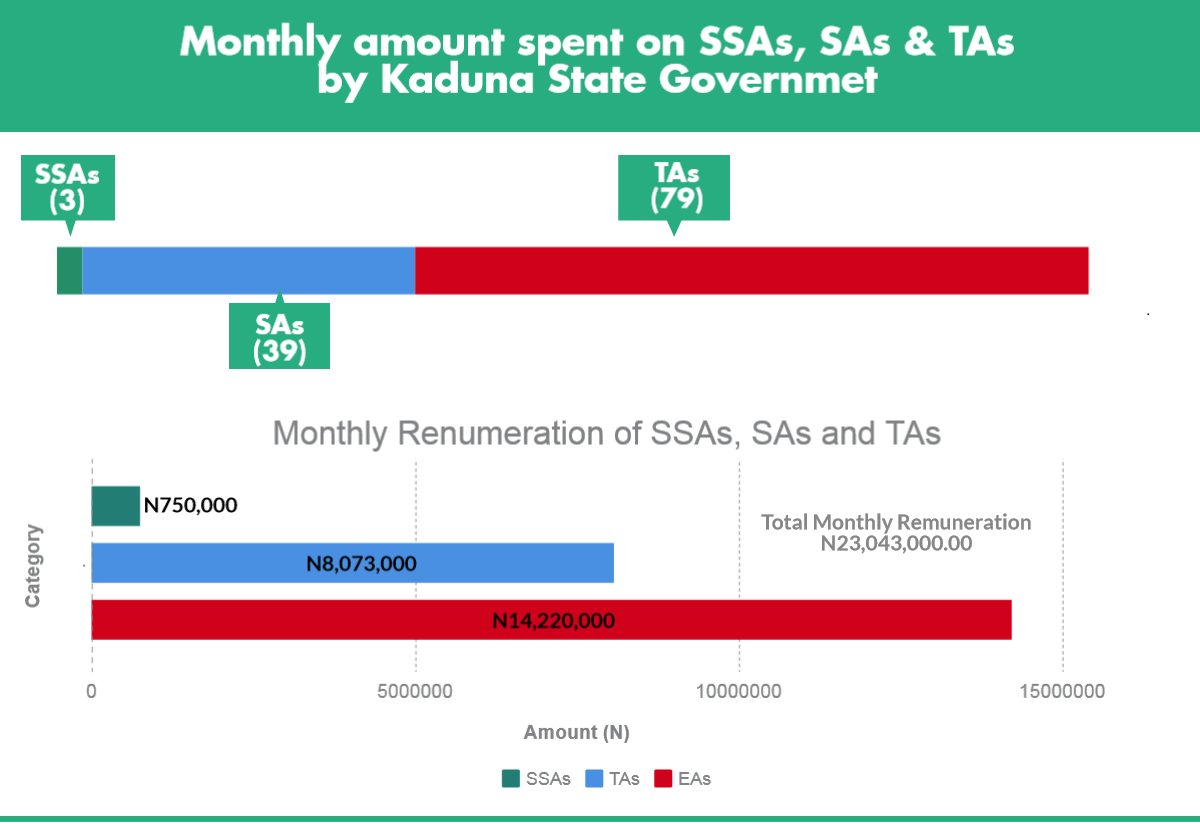 Again, if the Governor truly value tradition institutions, knows the vital role they play in ensuring security of lives & properties and recognize the fact that Kaduna State had tremendous expansion in terms of population and settlements between 2001 to date, he wouldn’t have spent N10bn on school feeding for just eight months knowing fully he has to pay them. This amount lavishly spent is enough to pay remuneration of these District Heads for good 85 years without reducing their number.

In conclusion, if truly fund is the only reason why El-Rufai want to reduce number of District Heads, will suggest that he cut down the number of SSAs, SAs, and TAs within his government. Doing so will avail him with N11.52m Every month. An amount enough to pay all District Heads without tempering with their number.