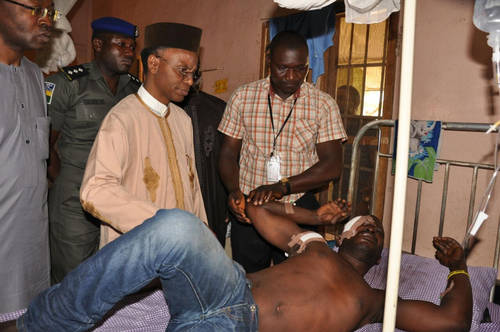 Governor Nasir Ahmad El-Rufai of Kaduna State today condemned those mischievously masterminding religious and ethnic tension in the state, declaring that there was no compulsion in religion.

On Tuesday night, a church leader in Kaduna confirmed to SaharaReporters that some youngsters assaulted a carpenter named Emmanuel Francis for eating during the current Ramadan fast, even though the carpenter had explained that he was not a Muslim.

Mr. Francis’s attackers inflicted several cuts on him and left him in a pool of his own blood. He was rushed to Saint Gerald’s Hospital Kaduna, a mission hospital, for treatment.

Governor El-Rufai, accompanied by his deputy, Bala Bantex, arrived at the hospital around 12:20 p.m. to visit the assault victim’s sickbed.

“The government will not allow anyone to get away with any crime using his or her faith as an excuse. There is no compulsion in religion,” Governor El-Rufai told reporters after visiting the wounded carpenter. He added, “It is a free country, and that means no imposition of faith or religious practices on anyone.

“We sympathize with our fellow citizen, Francis Emmanuel. We have assured him that we will not allow anybody to violate his right, or that of any other citizen. The Kaduna State Government is resolute in its stand that all criminals, including those who try to hide under Christianity or Islam, will be tackled and prosecuted.

“We have been given faith to live our lives in obedience to the Almighty, and to let that obedience manifest in our kindness to others, the honesty of our conduct and the consistency of our hard work. Care and compassion for others is one of the noblest ways of demonstrating love for God.”

Mr. El-Rufai urged all residents of Kaduna State to uphold peace and security in the state. “We should not allow differences in faith to be a barrier to harmony or a cause for conflict. Nobody can impose the tenet of his faith on another person. The decision to observe any religious activity is the prerogative of the individual. Let us all remain vigilant and report any suspicious activity to the security agencies,” he added.

SaharaReporters learned that officials of the Kaduna State branch of the Christian Association of Nigeria (CAN) called an emergency meeting to discuss the attack.

Emmanuel Francis stabbed by Muslims in Kaduna for eating during Ramadan