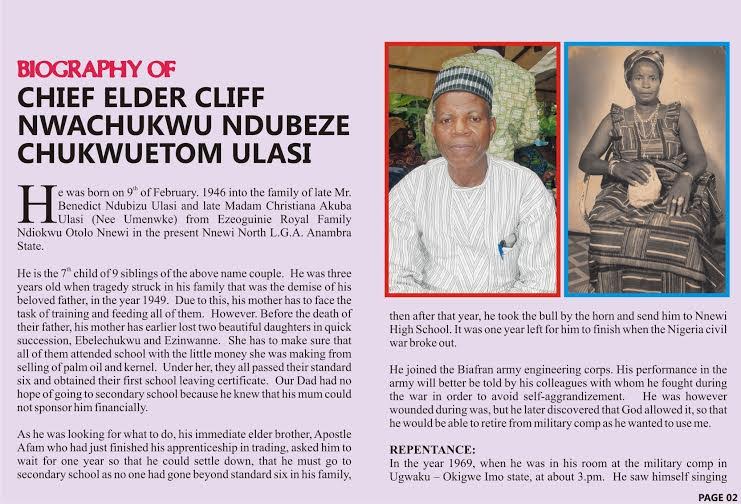 On February 9, 2016, Elder Clifford Nwachukwu Ndubeze Ulasi was 70 years but his kids and associates decided to invite friends and brethren to celebrate the 70th birthday of this great man of God this August, 7th, 2016 at the historical and ancient city of Enugu where he has spent good number of years of his life.

Celebrating 70th birthday of any Nigerian at this period is a rare feat in a country where the life span of citizens hovers around 50 years of age. If we are to consider the environment and economic challenges facing us a nation, we can then appreciate the foresight and wisdom of. the Organisers of this epochal birthday event to celebrate an icon and an unsung Pillar of the Christ’s Church in Nigeria in the person of Elder C. N. Ulasi is a welcome development.

His birth and early life

Sadly, Elder Ulasi was only three years old when tragedy struck in his family that was the demise of his beloved father, in the year 1949. Due to this, his mother has to face the task of training and feeding all of her nine kids without any support or help.

It is necessary to note that before the death of their father, his mother has earlier lost his two beautiful sisters in quick succession, Ebelechukwu and Ezinwanne.

This Amazon of a woman who fears no element of challenge has to make sure that all of her kids attended school with the little money she was making from selling of palm oil and kernel. Under her, they all passed their Standard six and obtained First School Leaving certificate. This sad situation gave no hope for Elder Ulasi to think of  going to secondary school because he knew that his mum could not sponsor him financially.

As he was looking for what to do, his immediate elder brother, Apostle Afam who had just finished his apprenticeship in trading, asked him to wait for one year so that he could settle down, that he must go to secondary school as no one had gone beyond standard six in his family, then after that year, he took the bull by the horn and send him to Nnewi High School. It was one year left for him to finish when the  Nigerian civil war broke out.

He joined the Biafran army engineering corps. His performance in the army will better be told by his colleagues with whom he fought with during the war in order to avoid self-aggrandizement. He was however wounded during the war but he later discovered that God allowed it so that  he would be able to retire from military background as he wanted to use him in propagating the gospel of our Lord, Jesus Christ.

In the year 1969, when he was in his room at the military camp in Ugwaku-Okigwe Imo State, at about 3pm. He saw himself singing  this worship song: “Bia o muo nso Biao o, Bia o Eze Jesus Bia o”. After the song for about three or four times, he noticed tears were gushing  down his cheeks, then he became sober and began to look for where to worship God. He was then directed to the then Christ Disciples Church (CDC) which is now renamed Life Dominion Christain Assembly where he is worshipping till date.

After the civil war, he felt like going into business and became a timber merchant. This he did for about ten years , he later developed interest in building construction and get closer to his late cousin, Mr SJC Nwosu from whom he learnt how to read building plans and began to set out buildings without supervision. Today, he is the Managing Director of a registered construction company – C.N.Ulasi and Sons Construction Co. They have handled so many building with the fear of God. It is on record that none of the buildings he either constructed or supervised ever had structural defect. 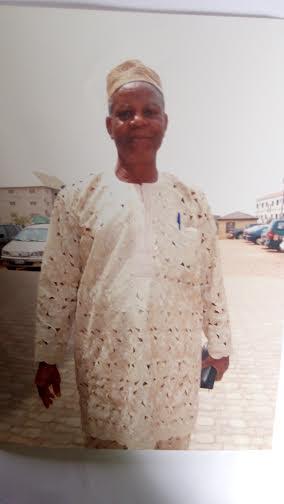 AWARDS AND SERVICE TO GOD AND HUMANITY

He has tried in his own little way to contribute his quota to the development of his community and outside his community, to that effect his community has given him two awards at different times. One was on 24th December, 1999 for his selfless service and contributions to  his community Ndiakwu Otolo.

In 1977, he was ordained an Elder of the church – Christ Disciples Church by then late Bishop J.A. Elioku. As well he was ordained a Chief Elder by the present Bishop of Life Dominion Christian Assembly – Rt. Rev. E.I. Moses on 26th November, 2015.

Nnewi Christian Brethren Inc. Nigeria also honoured him with an award in appreciation for his contributions towards the propagation of the ideals of the fellowship. He equally received an award from the Board of Directors and Management of National Salvation Printing and Publishing Company for his services to God and humanity in 2011.

On Nov. 28, 2015 he was blessed with two awards. One was from Aflame College of Bishop. He was given an award of “AMBSSADOR OF PEACE” (AP). As this was going on at the Headquarters of Life Dominion Christian Assembly Akwuzu. He recived information that his family Ulasi Ezeanyika Family living in Lagos had given him an Award in recognition and appreciation of his outstanding contributions to the growth of the extended family. These were going on simultaneously at Akwuzu and Lagos.

I came into contact with this great man of God on 16th November, 1979 (36years) ago when he led brother Ndukwe Duru, late Elder Chikelu, late Elder Joe Onuegbu, Brother Godwin and others to witness to me about the resurrected Christ at my uncle’s house in Enugu few months after graduating from CKC Onitsha. Until I gave my life to Christ after this encounter, Elder C. N. Ulasi has been a special inspiration to my life in general.

A principled, a rare gem and  a man who does not give to too much talking but if he talks, he will ensure that the purpose of such talk is achieved. A workaholic, honest, trustworthy, an embodiment of christain virtues, a respecter of christain family laws. Father of two Angels (Chinelo and Ngozi) all well established in their various fields and families. He is a grand father and a great husband to one and only mother of our great Faith. Matron Elizabeth Ulasi

An example of a patriotic Nigerian though fought during the Nigeria/Biafra war on the side of Biafra, has done everything immediately at the end of the war to preach love, equity and peace and advocate of virile and one united Nigeria.

The impact of Elder Ulasi in my life and lives of anybody that crosses his path need not be overemphasized as he is bound to make a positive impression in such a person’s life.

Under his tutelage, he ensured and contributed immensely towards my university education and whatever I may have achieved in this life. He was there with me during the burials of my father, mother and Senior brother. He has been and will always being a source of joy and strength to me and my family.

This great man of God is married to retired Chief Nursing Officer – Deaconess Lizzy Chinyelu Ulasi. The marriage is blessed with three children.

He  is blessed with seven grand children.

Finally, as he celebrates his 70th birthday, I and my entire family rejoices with him and pray God to grant him good health, sound mind and more fruitful years in his efforts to continue to impact on our lives.

EZE CHUKWUEMEKA EZE is a Media Consultant based in Port Harcourt. He can be reached via [email protected]

JMD: To include or not include? China-led SCO weighs Iranian membership