NewsRescue- A very strange meeting officially called ‘festival of ideas’, took place in Nigeria on the invite of Nduka Obaigbena and his ‘ThisDay’ Nigeria newspaper, just as Obama was being prepared for swearing-in (Jan 20th 2009). This very strange, higher echelons meeting was largely unreported by main stream news media, but NewsRescue picked it up and highlights the peculiarities of the agenda, the timing and those in attendance. The rest is for you to figure. Note- this meeting was before Nigeria’s president Yaradua’s death. This list is very interesting. How easy is it to invite these people together? How easy to get them to Africa and Nigeria? How easy is it to get them to Nigeria less than a week to the inauguration of the first US ‘half-Black’ president? what connects this diverse group of US Government advisers, world business moguls, media operatives and US ex presidents and presidential candidates? Who is Nduka Obaigbena that owns and funds ThisDay and what are its affiliations? Was this what is called a ‘illuminati event’? These are just a few of many questions created by this event. 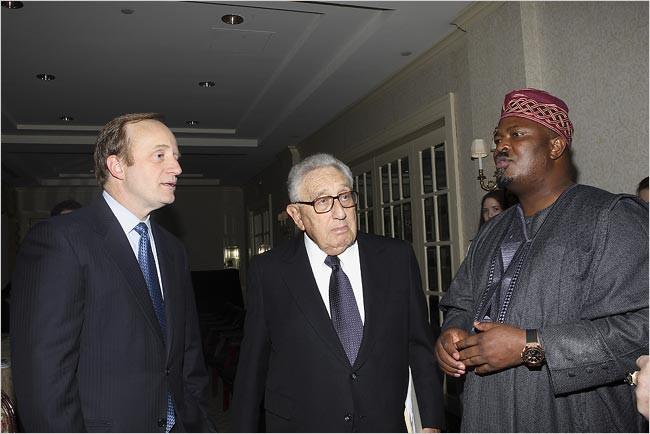 What was this meeting all about?

By all means this is not an event of low merit, and the attendance by all these eminent personalities barely a week to Obama’s inauguration as well as the timing of the event, possibly to aid its secrecy or a very critical event to take place just before inauguration, raises a whirlwind of questions.

According to allAfrica.com, the event was described as below:

A star-studded international team will discuss the implications of the Barack Obama Presidency for Africa at the second session.

The team will lead discussions in Session II entitled “Obama is President: What Next for the World and So What for Africa ?”

As this meeting has been concluded and Obama sworn in, the public is interested in knowing what policies were discussed for Africa and how these will be implemented. What will be taken from this meeting to Obama, the new president of the United States, and what and how the conclusion of this ThisDay meeting in Nigeria shall determine the new administrations policies toward Africa, and the possibility of Africa becoming free from imperialism and neo-colonialism, un-free trade, SAP and other policies that hamper its growth at last.

NewsRescue is calling for updates and the minutes of this meeting from anyone with authentic information. Please email: [email protected]

Henry Kissinger, seen with Nduka Obaigbena in the picture in above article, was a Nobel Peace Prize winner and former secretary of state under President Nixon. He also served under the Ford and Reagan administrations. Kissinger, named by Bush as the chairman of the Sept. 11 investigatory commission, on January 6th at the commencement of Obama’s administration, said in this CNBC video interview:

“…conflicts across the globe and an international respect for Barack Obama have created the perfect setting for establishment of “a New World Order.”

It is rather scary that US top brass view chaos as a useful opportunity to gain world dominance. If this is so, does Nigeria not stand at the risk of being induced into chaos by external governments, to enable US dominate the nation and the Obama led, ‘New World Order’?