ENDS non governmental organisation has reported the Federal government of Nigeria and Senate president Bukola Saraki to the United Nations Special Rapporteurs on Human Rights and Torture, over the recent armed terrorists’ abduction of a Rights activist in Ilorin Kwara state.

On August 31st, 2017 Mr. Crown Olanrewaju Ahmed was brutally abducted and attacked at gun point and forced to make a statement in effort to implicate Mr. Omoyele Sowore of SaharaReporters and Mr. Kayode Oyin-Zubair in alleged court disruption. Mr. Crown Olanrewaju Ahmed’s cell phone was also stolen in the act of terror by loyalists to Nigeria’s Senate president Bukola Saraki. He was also stripped and forced by the sponsored terrorists to hold up his “Cabal Must Go” revolution T-shirt.

The petition read in part:

Mr. Crown Olanrewaju Ahmed is currently in hiding, recovering from the physical and psychological trauma of the attack in which his cell phone was also seized at gun point.

Mr. Bamikole Omisore went further to tweet the video of the thug torture and forced statement-under-duress of our member.

To this end, we write the UN to petition the Federal government of Nigeria to:

1. address the promotion of lawlessness and acts of terrorism involving abduction, torture and risk to life of the citizens of Nigeria.

2. act to protect the citizens of Nigeria from mob action and mob justice by officials of the government as promoted by the senate president via the statement made by his media aide.

3. compel the police to investigate and apprehend the perpetrators of the act of terror-abduction and their sponsors. The video was first uploaded by a certain “Mr. Olusegun Olusola AKA Shollyment” on facebook: https://www.facebook.com/sholyment

4. compel the police to act against a certain “Fidelity Reporters” for publishing the terror video accusing SaharaReporters and other persons in acts of terror on the basis of the abduction-duress “confession” of Mr. Crown Olanrewaju Ahmed. Story: https://fidelityreporters.com/2017/08/31/how-kayode-oyin-attempt-to-bomb-ilorin-high-court-failed/ 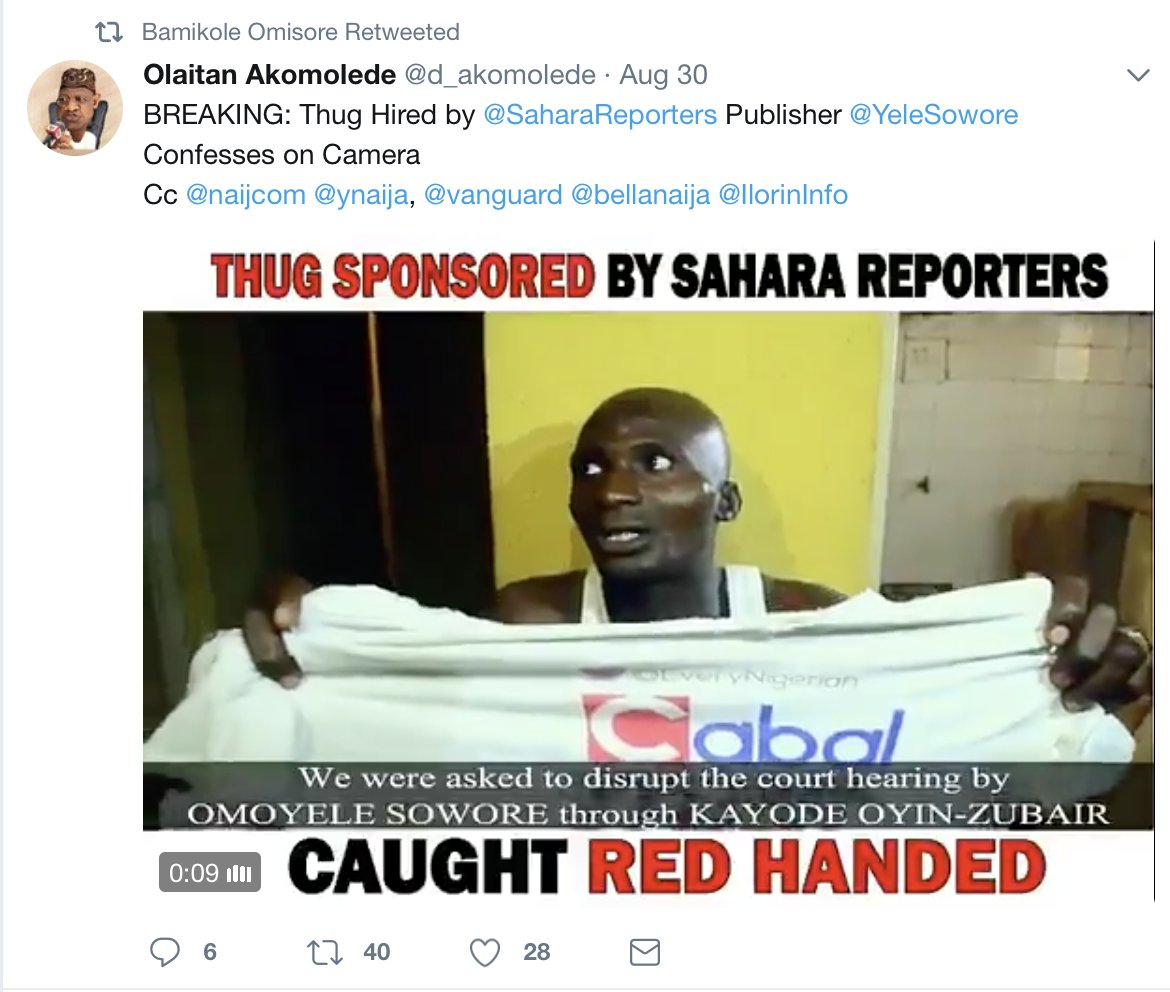 On behalf of the increasing numbers of victims of government perpetrated and condoled torture and terror in Nigeria, we look forward to expedient processes promoting abidance to the rule of law, respect for justice and the discouragement and redress of mob action, mob justice and mob terror in Nigeria.