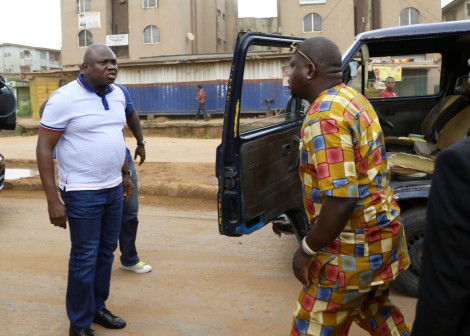 ENVIRONMENTAL Rights Action (ERA), an environmental rights advocacy group, has taken on Governor Akinwunmi Ambode of Lagos State, on the issue of water in the state. ERA is mobilising citizens to resist moves by the All Progressives Congress (APC) government to privatise water in the state.

But, Ambode is arguing  that the infrastructure at the waterworks are in a very bad shape.

In an online interview on Tuesday, with ERA Spokesman, Philip Jakpor, the group countered the governor, saying the  argument of the APC administration  reinforces their conviction that the problem with water access in Lagos is not lack of resources, ”but rather mismanagement and lack of accountability to people”.

According to ERA, ”the solution is not profit-driven privatisation through a Public-Private Partnership (PPP) — it is strong democratically accountable management and pro-people public investment.”

This appears to be contrary to the impression in government circles in Lagos that civil society and union partnership is intended to cripple the state government.

Jakpor said Water, Our Right Coalition which ERA formed early this year is not the adversary of the Lagos government. ”We are ready to help the APC administration and our water managers build a water system that provides access to Lagos residents. That model we are proposing is not in the realm of water privatisation”, the ERA spokesman said.

Continuing, the environmental rights group said the parlous state of infrastructure which was the basis of Holloway’s ouster ”is testament to failure in management of the water works in Lagos, and not basis of the PPP. We should call the bad managers of the LSWC to account for all the monies allocated to the corporation that were either not used, or outrightly misappropriated.”

To move Lagos toward the path of universal water access, ERA says they are asking Governor Ambode to convene a meeting with Our Water Our Right Coalition to discuss collaborating to meet our mutual goals.

They are accordingly, urging the Lagos government to:

*  Disclose all International Finance Corporation and World Bank activity and discussions with Lagos government officials regarding water, including formal and informal advisory roles.

*  Fully uphold the human right to water as an obligation of the government, representing the people.

*  Reject contracts designed by or involving the IFC, which operates to maximize private profit.

*  Build the political will to prioritize water for the people, therefore investing in the water infrastructure necessary to provide universal water access, which will create jobs, improve public health, and invigorate the Lagos economy.

*  Reject all forms of water privatization and commodification. Water is life.

The group is also asking the governor to publicly oppose the PPP water privatisation scheme currently being pursued in the state, and instead propose a comprehensive plan for achieving universal access to clean water in the state.