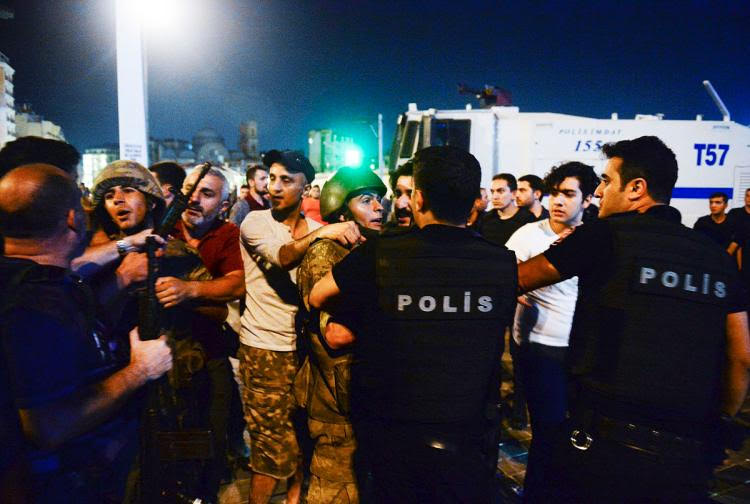 Politics’ incestuous relationship with soccer came full circle this week with the mass resignation of executives of the Turkish football federation and the firing of scores of officials, including referees, as part of the government’s witch-hunt against followers of controversial Muslim preacher Fethullah Gulen and other government critics.

Intended to facilitate the weeding out of any Gulen supporters, the executives tendered their resignations five years after the conflict between Gulen and Turkish president Recep Tayyip Erdogan first erupted in a match fixing scandal that masked a battle for control of Fenerbahce SK, the political crown jewel of Turkish soccer. The federation said two days after the resignations that it had fired 94 other officials it linked to this month’s failed military coup.

“Our federation deemed it necessary to dismiss 94 people, including regional and nationally-ranked referees and assistant referees, regional refereeing committee members and national and regional observers,” the Turkish Football Federation said.

The resignations and dismissals coupled with a broader witch-hunt sparked by the failed July 15 military coup that has led to the arrest and/or dismissal of some 60,000 people, including thousands of public servants, allows Mr. Erdogan to reassert control of soccer after five years in which fans successfully resisted his efforts. Among those dismissed last month were 265 employees of the youth and sports ministry.

The president’s efforts to control soccer like his moves to build Turkey’s police into a force capable of counter-balancing the military conjures up comparisons between the increasingly authoritarian state envisioned by Mr. Erdogan and Arab autocrats who distrustful of their militaries built regimes reliant on security forces.

Mr. Erdogan’s authoritarian tendencies are also rooted in modern Turkish history. The president is following in the footsteps of his role model, Adnan Menderes, Turkey’s first democratically elected president, who similarly represented, despite being a big landowner, the country’s conservative and nationalist masses rather than its secular, Kemalist elite.

Bent on loosening secular Turkey’s strict control of religious expression, Mr. Menderes like Mr. Erdogan, increasingly cracked down on any opposition to his policies. Mr. Erdogan’s over-reaching, harsh response to the failed coup stems from the fact that Mr Menderes was ousted from office in a military coup in 1960 and executed a year later.

Arab autocrats like Mr. Erdogan seek tight control of soccer, the most popular sport and expression of popular culture in their countries, because of its mobilizing potential in anti-government protests. Soccer fans played a key role in popular Arab revolts five years ago as well as the 2013 Gezi Park anti-government protests in Turkey.

Followers of Mr. Gulen, whom Mr. Erdogan blames for this month’s failed coup, first gave the president the opportunity to clean out the judiciary and police when prosecutors believed to be loyal to the self-exiled preacher in 2013 charged members of the then prime minister’s cabinet and family with corruption. Mr. Erdogan shut down the investigations by firing or moving to less sensitive jobs thousands of police officers, prosecutors and other judicial personnel.

As a result, the police played a key role in cooperation with anti-coup protesters in defeating the coup attempt, bearing testimony to the degree to which Mr. Erdogan had succeeded in countering Mr. Gulen’s influence in the police. Turkish Prime Minister Binali Yildirim said a day after the attempt that 60 police officers had lost their lives foiling the coup.

The president this week reaffirmed this with his announcement that Turkey’s security forces — despite reports of thousands of police officers as well as 100 employees of intelligence services having been dismissed since the failed coup — were being reorganized in a way that they would be able to exercise oversight over the military.

Mr. Erdogan signalled his confidence in the police months before the failed coup, promising to defend it against any renewed attempt by Mr. Gulen to again infiltrate it. “I call on all my police brothers: rest assured! The people, the state are behind you. Don’t worry about this. The president, the government, stands behind you. Be at ease… We all have to stand behind our police,” Mr. Erdogan said at a police ceremony in April.

The failed coup, described by Mr. Erdogan as a gift from God, has allowed him to fulfil a long-term goal of putting the military under civilian control, a pre-requisite for European Union membership, and to crush any criticism of his government. That is likely to also lead to a temporary neutralization of militant soccer fans who in the last three years successfully resisted government attempts to identify them through an electronic ticketing system and enforce a ban on chanting of political slogans in stadiums.

Turkey’s militant soccer fan groups although opposed to the coup were largely absent during the protests that helped thwart it and that were largely populated by supporters of Mr. Erdogan who often shouted religiously inspired slogans.

The litmus test for Mr. Erdogan could well be whether groups like Carsi, the storied support group of Istanbul’s Besiktas JK that prides itself on being against everything, remain on the side lines or ultimately explore ways of countering what many of them see as Mr. Erdogan’s effort to exploit the failed attempt to advance his own power grab that started already prior to the military attempt to unseat him.

Dr. James M. Dorsey is a senior fellow at the S. Rajaratnam School of International Studies, co-director of the University of Würzburg’s Institute for Fan Culture, and the author of The Turbulent World of Middle East Soccerblog, a recently published book with the same title, and also just published Comparative Political Transitions between Southeast Asia and the Middle East and North Africa, co-authored with Dr. Teresita Cruz-Del Rosario