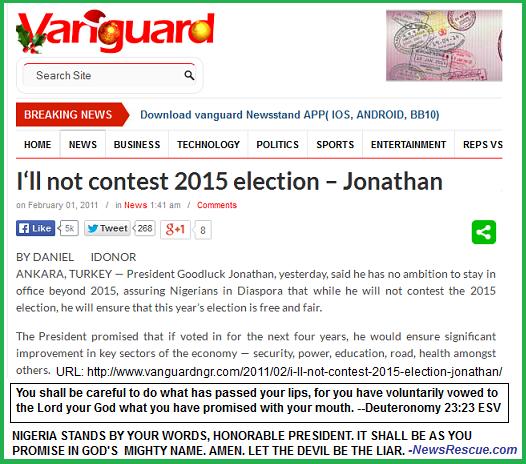 Open Letter to Mr. President: It is Never too Late

It is my utmost honour and privilege to be able to have a platform through which an unknown citizen of this great country can communicate with his President. I do not need to introduce myself; I am just a citizen of Nigeria, born and bred in Nigeria, who is passionate about Nigeria, and believes strongly in her future. Precisely on December 31, 2013, just few minutes to the New Year, I resolved I will always write you on the 25th day of every month, beginning from this month. While I know I am just one out of more than 170 million Nigerians, I believe my letters each month will echo the voices of more than a million hearts.

Sir, I must be sincere with you: I am not your fan. I am one of those who felt you were not politically savvy enough to lead this nation, not confident enough in your expressions. And, I must confess, I still feel this way. While I commend your efforts so far in the area of power, agriculture, I am not particularly impressed with the continuous perversion of corruption in the country. And I quite agree with the Speaker of the House of Representatives that your body language shows very much that curbing corruption is not one of your transformation agenda.

Hitherto, I have used every opportunity to lash out at you, condemning you at every available forum. For instance, Mr. President, you have a minister whose name is constantly mentioned in all the political upheavals in his state. That minister remains in your cabinet. How do you expect such one to focus in his work? Another minister was indicted for exceeding constitutional bound for project approval, and up till now, the Presidency is yet to make any public statement to that effect. The Presidency scored a minus when Governor Jonah Jang was acknowledged, and is still referred, as the Chairman of Nigerian Governor’s Forum. Nigerians cannot be fooled. And sir, the issue of the $10.8 billion NNPC is yet to account for readily comes to mind. ASUU’s case was dragged for too long before it was resolved (I seriously hope that events currently emanating from different universities support that issues have truly been resolved). Recently, I have noticed you use virtually every opportunity at public gathering to lash out at your perceived enemies. All these, and more, are taints in whatever success your administration must have recorded.

However, in the midst of all these, I am not here to condemn you Mr. President. As a matter of fact, I am not in a position to. Why? I am yet to remove completely the logs in my own eyes. Also, I had to come to the conclusion that my ranting, mixed with those of others all over the country, will never solve the problems of this country. I came to the conclusion that your success is our success, and your failure is our failure. I am responsible to see that you succeed. This is your time, I strongly believe. Hence, I have resolved to use different means available to me to see to it that you succeed. First, I have decided to start praying for you – I have actually started. Secondly, I will try to communicate with you every month, to highlight issues that I believe you may need to resolve to move the nation forward.

I had to be sure I was ready for this – praying for you – because candidly, many times, I do get angry with some of your actions or/and inactions. And I can’t promise I won’t anymore. One thing I know very well is that God wants to bring about a change in Nigeria. The question is: are you going to be part of it? Are you going to be a tool with which God will bring about this change? In other words, there is a wind of change, and it’s divine. The danger is that anyone who is not for Him may be blown away. God is raising a group of people with integrity. You can join the train sir. I want you to join the group. And this is why I am going to be praying for and communicating with you.

Mr. President, while on my part I have resolved to turn a new leaf in my attitude toward you, I believe it is not too late for you to begin to right every wrong, within your power, in Nigeria. For example, your yet-to-be-expressed decision, or probably your indecision, to contest in 2015, going by the handwriting on the wall, is tearing this nation apart, beginning from your party. For instance, I can tell you authoritatively that many who have lived virtually all their lives here in the north, for example in the state where I live, but who are indigenes from the south, are already leaving for their states. Why? They are afraid of 2015 elections. Some claimed you promised not to contest in 2015. You claim you did not promise. Who will Nigerians believe? Sir, evidently God, in 2011, brought you to govern this nation. If you indeed promised to run a single term, please, I will advise, do not run in 2015, because God will not go with you. He respects men of integrity – those whose yes is yes, and their no no.

However, I challenge you today: if you did not promise anyone that you will not run in 2015, go ahead and run. But let me quickly point out an issue: your party lacks ideals – people-oriented ideals. And this may not help your cause. I am not in support of any political party, but I can say confidently that any party that will defeat its oppositions is one which has defined ideals that are people-oriented, and whose followers are strict adherence of these ideals. Define ideals for your party, stick to it for the remaining part of this tenure, and I tell you, 2015 election would be peaceful.

I will not want to bug you with further issues for now, knowing you are always very busy. I just pray that from now till my next letter will come to you, the country, under your leadership, will have made considerable progress – progress that the masses can physically feel.

Thanking you for your usual cooperation.