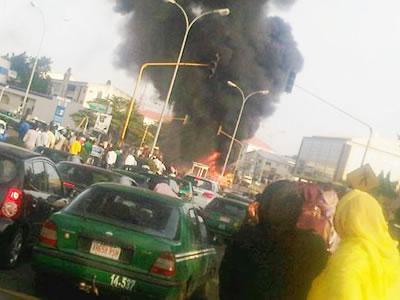 (THEWILL) – Deafening explosions rocked Maiduguri for the second time in a week as the youth vigilante group, popularly known as Civilian JTF, Wednesday, in the Borno State capital, engaged the Boko Haram insurgents in a deadly clash .

Though the casualty figure from the bloody clash remained unknown when filing this report, it is believed that both sides lost many of their  members to the clash.

The confrontation was the climax of weeks of threat by Boko Haram to kill the youths for assisting security operatives in the ongoing crackdown on the insurgents. The youths were also accused by the terrorists of smoking their members out of their hiding, arresting and killing them.

Trouble started, Wednesday afternoon, when  the youths  invaded the Jajeri ward stronghold of Boko Haram to smoke out  their members.

Apparently prepared for war, the youths armed themselves with guns, explosives and machetes as they confronted the insurgents, who returned fire for fire, deploying explosives and bombs which rocked the neighbourhood around the Jajeri ward behind the  Baga market with residents of the area scampering for safety in the midst of the confusion.

A source in the area said trouble started when the civilian JTF who have since been receiving support from JTF embarked on  a serious stop  and search along Baga road where not less than six suspected Boko Haram members were nabbed.

The explosion from Wednesday’s clash, according to residents, was  the second in a week in Maiduguri as a woman who had backed explosive device as if it was a baby had the device exploding on her at the Maiduguri Monday market.