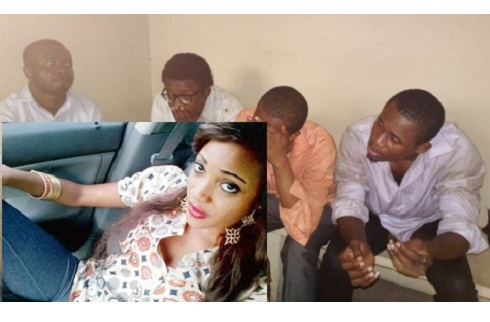 Sahara– Four suspects linked to the murder of  the daughter of a former army general, Cynthia Osokogu, appeared before Magistrate Aka Bashorun of Yaba Magistrate’s court today to stand trial for killing the 24-year old graduate student.

These are suspects:  Okwumo Echezona Nwabufor, 33, Ezike Ilechukwu Olisaeloka, 23, Orji Osita, 32, and Maduakor Chukwunonso, 25 includes the pharmacist who provided the “rape-drug” used in killing her. FOUR young men, alleged to have killed Cynthia Osokogu, a retired general’s daughter, were, on Monday, brought before the Yaba Magistrate’s Court by the police on an eight-count charge bordering on felony, conspiracy, robbery and murder.

The police alleged that the four murdered Cynthia by first administering Rohypnol Flunitrapezam on her, then binding, torturing, and strangling her.

According to the police, the defendants also  along with some others still at large, raped and robbed the deceased of valuables that included an international passport, a mobile phone, shoes, bags, wristwatches and jewellery.

Count two accused them of unlawfully killing “one Cynthia Osokogu Udoka ‘f’ aged 25 years by administering her with obnoxious substance known as Rohypnol Flunitrazepam tablets via a Ribena fruit juice drink, binding her hands with chain, padlocked and taped her legs, neck and mouth with cellotape, giving her fist blows all over her body, giving her several human bites, tortured and strangled her to death.”

In count three, they were also accused of conspiring among themselves to commit felony to wit: Armed robbery. The police, in count four, accused them of robbing Cynthia of her personal items while being armed with “obnoxious substances and other offensive weapons.”

In count seven, the men were alleged to have, “with intent to facilitate the commission of felony, did unlawfully administer an obnoxious substance known as Rohypnol Flunitrazepam tablets, purchased at Oxpharm Pharmacy, 32 Road, Festac Town, Lagos, on Cynthia Osokogu Udoka.”

They were, in count eight, alleged to have,”with intent to harm, did unlawfully cause an obnoxious substance known as Rohypnol Flunitrazepam tablets to be administered on Cynthia Osokogu Udoka against her consent and caused her grievous harm.”

At the Monday proceedings, the presiding magistrate,  Paul Adekomaiya, directed the police prosecutor, Ag. SP Chukwu Agwu, to forward the case file to the Director of Public Prosecution (DPP) and ordered that the defendants  be remanded in prison custody as their plea could not be taken since the Magistrate’s Court lacked the jurisdiction to try a case involving allegation of murder.

The case was adjourned till October 3, 2012 for mention, pending the advice of the DPP.

It will be recalled that the first and second defendants, Okwumo and Ezike, had earlier been paraded by the state police command, where they admitted to luring Cynthia to Lagos via the social network.

They also admitted to drugging, binding, assaulting and killing her.

Cynthia’s death, according to them, was a mistake. They admitted to previously luring four other women to hotels around Festac Town, Lagos.

The third and fourth defendants, however, were said to be attendants at Oxpharm Pharmacy, also at Festac town, where the drug used on the deceased was purchased.

Meanwhile, the remains of Cynthia  will be buried on September 7 at Bebe, Ovia Agbor, Ika South Local Government Area of Delta,  the family said.

Mrs Joy Osokogu, who announced the date to the News Agency of Nigeria (NAN) in Jos on Monday, advised youths to be very cautious about making friends with people that they did not know.

Meanwhile, The All Nigeria People’s Party (ANPP), on Monday, called on the Federal Government to safeguard the future of Nigerian youths by paying more attention to the nation’s health care infrastructure.

This is contained in a statement signed by the National Publicity Secretary of the party, Mr Emma Eneukwu.

“In the past few days, Nigerian media has been awash with the gory and heartbreaking story of the murder of Cynthia Osokogu by two young men whom she met on Facebook.

“The two culprits, Okwuoma Nwabufo and Ezekiel Odera, confessed to the crime when the police brought them before journalists at the Lagos State Police command, Ikeja.

“They have also given account of how they lured Cynthia from her Nasarawa State base and subsequently killed her in a hotel in Festac Town, Lagos State.

It stated that long before now, they had revealed to have drugged other female victims with Rohypnol, a prescription drug used in the short-term treatment of insomnia.

It also said they confessed to have bought the drugs over the counter from pharmacists, which was also injected into Cynthia’s drink before they killed her.

“Our health care system is such that many medications that should rightly come under prescription drugs are sold in the open market as over-the-counter (OTC) drugs.

“The police arrested the pharmacist that sold the drug to Cynthia’s killers, but that is not enough to stop future purchase and use of such dangerous drugs,” it stated

It urged the government to set up a water-tight regulatory framework in the drug administration environment to curb irresponsible dispensing of such drugs in future.

It stated: “it is high time the Federal Government and the relevant agencies embarked on a vigorous national youth orientation on the dangers of social media.” – Tribune