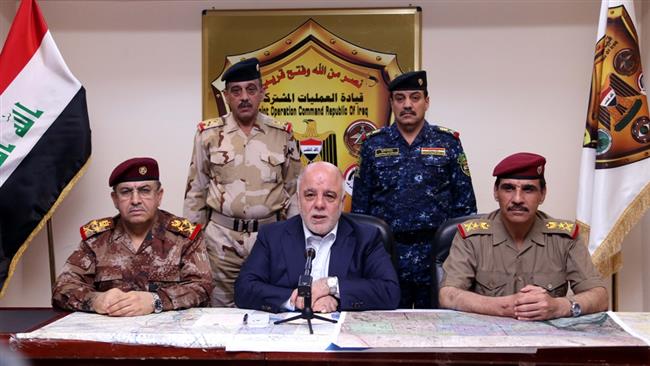 Iraqi premier has congratulated the nation for the liberation of Fallujah from the grip of the Daesh militant group, saying there is no place in his country for the Takfiri terrorists.

“We promised you the liberation of Fallujah and we retook it. Our security forces control the city except for small pockets that need to be cleared within the coming hours,” Haider al-Abadi said in a brief speech broadcast on state television on Friday night.

“There is no place in Iraq for you and you will be punished for all the crimes you have committed. The Iraqi people are all united against you. Get out of our country, for Iraq is for Iraqis,” Abadi further said, addressing the terrorists.

The Iraqi premier also promised that the liberation of Mosul – Daesh’s de facto capital in the country since June 2014 – is very close as it is the Iraqi forces’ “next destination” in their campaign to flush the militants out of the country. Read full in Press