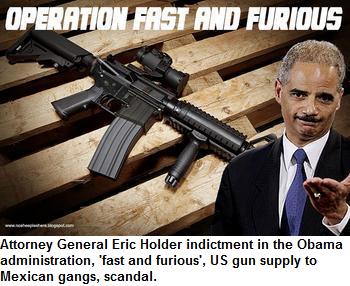 June 29th, 2012
An analyst says the trafficking of guns by the US to violent cartels in Mexico in a secret operation has resulted in some of those guns entering into Arizona.

Press TV has interviewed Wayne Madsen, investigative journalist from Washington, about the ramifications of the US running guns across the Mexican border and being caught doing it; and also about the possibility that US Attorney General Eric Holder, voted by Congress as being in contempt of Congress, will be pursued through independent prosecution.

Mexico to US Govt.: Stop gun smuggling to Mexican gangs; Fast and Furious

February 17th, 2012 NewsRescue- In the CNN story below, the Mexican president Felipe Calderon called on US government officials to block the trafficking of guns across the border to Mexican gangs….

What follows is an approximate transcript of the interview.

Press TV: It’s been said that the Holder case is meant to distract Americans from bigger issues at hand such as the economy and never ending wars etc. Do you agree or is this a lot more significant?

Madsen:Well, I think one of the interests in this case may be misplaced somewhat. Of course, the Obama White House says this was a political move, but… and we have to understand it is the Justice Department, which would have to bring charges for this contempt of Congress vote against the attorney general.

Well, the attorney general is the head of the Justice Department so it’s rather doubtful that he is going to appoint a prosecutor to have himself prosecuted.

So, this is actually more of a symbolic vote by the House. They knew this wasn’t going to go anywhere, but there’s another issue.

The issue is that anytime the National Rifle Association thinks that guns are an issue and it could be restricted, they have their people in Congress vote for their legislation. So we saw some 17 Democrats vote with Republicans to cite Holder for contempt of Congress – I think only two Republicans joined the Democrats in opposition.

But we also know that there are a lot of strange things going on in Mexico with the two major drug cartels, Las Zetas and the Sinaloa cartel and the fact is that guns from the US wound up in the hands of these cartels.

There’s a conspiracy theory amongst the NRA that this is a means by the Obama administration to try to restrict guns, but there’s also another thought that this is an attempt to destabilize Mexico.

There’s a big presidential election in Mexico on Sunday and the mere fact that we could see a return of the PRI Party candidates, which ruled Mexico for decades, there could be much more to what’s going on with the running of guns from the US into Mexico.

And I’m told from sources in Arizona that guns are coming back across the border from Mexico into states like Arizona that share a border with Mexico… So I’m wondering whether there’s an intelligence operation going on and that is why Mr. Holder decided to stonewall because his record shows that he will protect the interests of all US intelligence operations and this may be an attempt by the US to destabilize Mexico.

Press TV: I want to pick up on your point about the Justice Department. Doesn’t the fact that Holder’s case will be referred to prosecutors under him unearth a vital flaw, maybe, in the judicial system? It seems the US attorney general is in a sense above the law as no prosecutor would want to jeopardize his or her own position.

Madsen: Absolutely. And this is why many times we saw independent special councils or independent prosecutors named, to get that individual out from any kind of coercion from the attorney general.

We saw during Watergate with the independent Watergate prosecutor; we saw it again in the move against President Clinton that ended up in his impeachment – of course, he was found not guilty by the Senate. But we have seen these special prosecutors appointed because of this very issue.

It’s always stated that the attorney general is not a political position. It’s somehow different from the other members of the Cabinet, but we’ve seen from past history with the Attorney General John Mitchell under Richard Nixon and Edwin Meese under Reagan that these attorneys general have been highly political and in fact Attorney General Mitchell went to prison because of his activity during the Watergate scandal.

So, yes it does point out a flaw in the Independent Counsel Statute, which is now not in force. It was always used as a means to prevent the politicization of the Justice Department in these types of matters. –PressTv; capion image- theconservativetreehouse