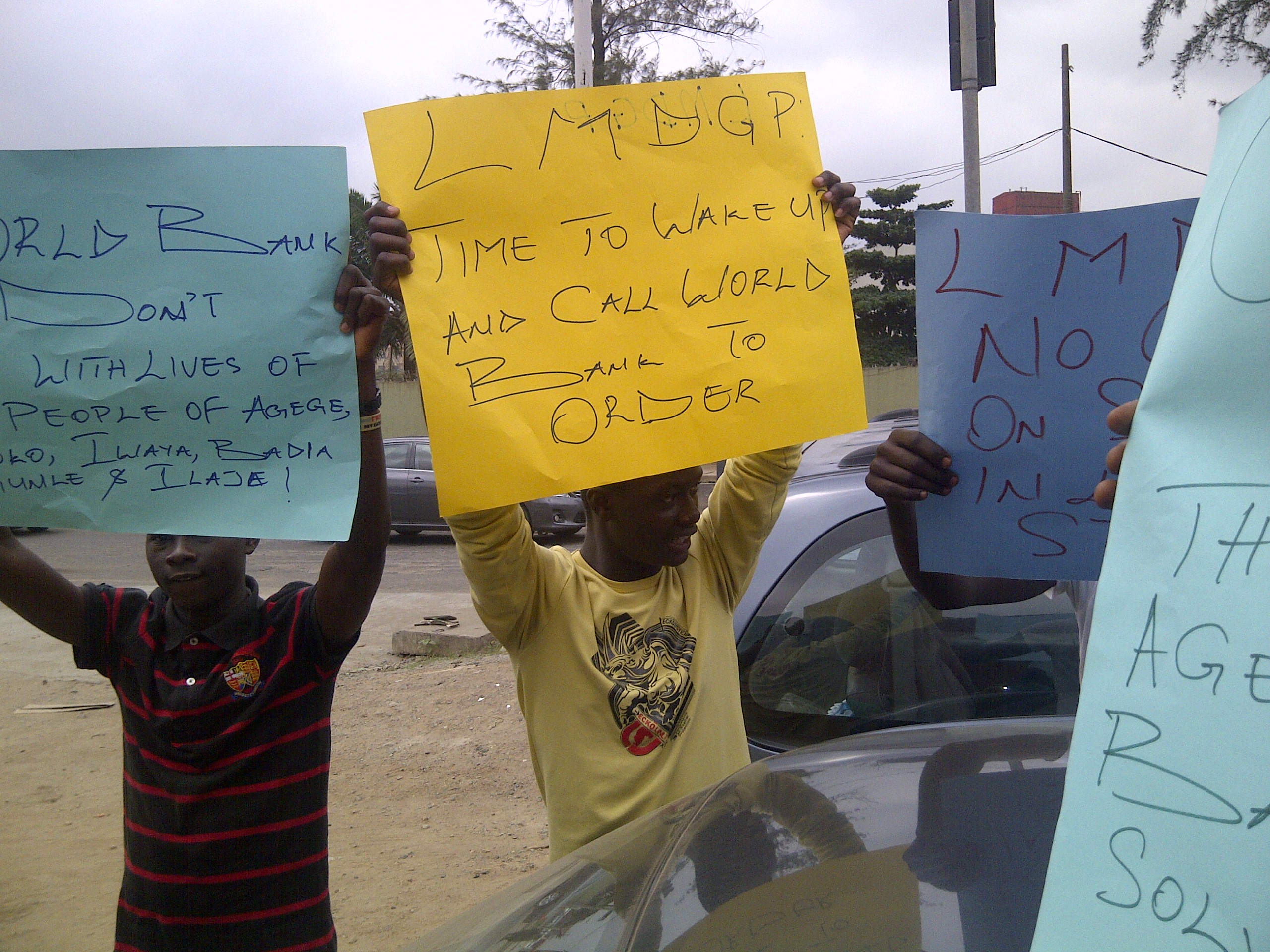 NewsRescue-Anxiety and Fear has gripped over 500,000 inhabitants of  Lagos slum areas  in Amukoko, Ajegunle, Agege, Badia, Ijeshatedo, Iwaya, ilaje, Bariga and Makoko over purported plans by the Nigerian office of the World Bank to suspend the funding of the Lagos Metropolitian Development & Governance  Project (LMDGP) worth $200million (N3.2 billion). The project was designed  to upgrade the low level  of the human, social and infrastructural base of the communities.

However a coalition of 20 Civil society groups under the auspices of Centre for Public Opinion Monitoring (CENPOM) and Conscience Nigeria, stormed the office of the LMDGP in Agidingbi, Lagos, today to demand for the status of the project amid purported moves by Country Director of the World Bank to stop the funding of the project.Addressing the mini rally  at the Premises of the Project representatives of the Coalition  Comrade Tosin Adeyanju and Affez Abiodun said the fears were palpable going by the slow pace of implementation of the projects in the slum areas and information reaching the people, adding that the Project Managers must embark on sensitization of the people to allay their fears.

According to  them, an  Impeccable  Finance ministry source, who  spoke under condition of anonymity, hinted that  suspension was imminent and that this was already a source of frosty relationship between the Ministry which endorsed the funding arrangement on behalf of the Lagos state Government  and World bank officials because of the social consequences the planned withdrawal may have on the densely populated city still reeling under severe socio economic difficulties and environmental concerns. At the centre of the plan to halt the redevelopment of Lagos slums was said to be the  Nigerian Country Director of the World Bank Ms Francoise Marie Nelly who the source said, had not  hidden her dislike for the continuation of the program beyond September 2013.

While the Lagos state Government, the beneficiary of the loan and the Federal Ministry of Finance which executed the loan agreement of the project had supported the continuation of the project through extension for another 18 months ,a move said to be  supported by the Internal Task Team of the Bank, the Country Director  have blocked the extension, preferring to transfer the remaining funds in the project to another one.

The World Bank was said to have hinged it’s planned withdrawal on the slow disbursement and the recent demolition  of illegal structures by squatters carried out by the Lagos state Government on Badia area of the state, insisting that the state Government must compensate the affected persons. Submitting the Communique of their meeting to the Management of LMDGP, the group under  the auspices of a Coalition of Civil society groups in Support of Slums Rehabilitation In Lagos urged the Governor Raji Fashola to engage the World Bank for purposes of extending the project beyond its expiry date of September 2013.

Receiving the group, the Communication Consultant to the Project  Mr Michael Ilesanmi pledged to pass the message of the Civil society groups to the Management and allayed fears of any abandoned project. He said the project was still implementing its mandate in the slum areas.

In the Communique signed by Lagos state Coordinator of CENPOM Afeez Abiodun and  the South West Coordinator Hon Charles Adebanji, the group stated:

“The meeting commended the decision of the Lagos state government  to commence enumeration of the areas affected by the .This is evidence of a listening Government worthy of emulation. We call on Governor Fashola to expedite action on the resettlement plan and compensation of the thousands of people involved.-That the State government and the funding agency

-The CSOs condemned any attempt  by the World Bank to withdraw  funding of the project as it will  cause more hardship to the people.

While acknowledging the role of the bank in supporting the resettlement of the people affected by demolitions carried out by the Government, the meeting said it would be counter productive for the World Bank to suspend the project and put the people in more distress.Rather,the Bank should extend the project and strenghten its monitoring mechanism to ensure effective implementation.

-The Cso’s agreed to Petition and hold advocacy visits to the  Speaker House of Assembly, the Legislators at Lagos and National Assembly, the Governor of Lagos state, the  Coordinating Minister of Finance,the World Bank  and the UN organisations like HABITAT, to protest the reported move to cancel or withdraw the funding of the LMDGP. The committee of coordinating CSOs are to mobilize all  members  in Lagos and Abuja to submit the petitions and organize protest to ensure that the funding is not withdrawn.