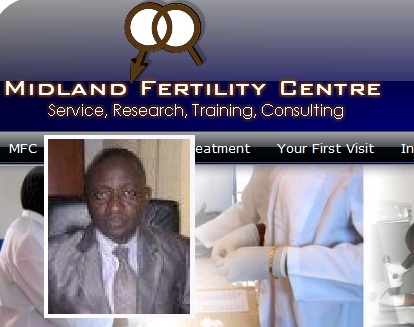 DISCLAIMER: NewsRescue does not create stories, we only report news and verify our sources and reports.

NewsRescue may or may not be directly affiliated with the sources of stories, though all information is vigorously crosschecked for honesty and accuracy.

NewsRescue does not convict or charge. In this and all stories, the suspect (Dr Jimoh Akanbi Gafar) is innocent till proven guilty in the court of law. Our duty as media as happens world-over is to release arrest information and mug shots, to enable other witnesses come out either in support or against for full, effective execution of law and judgment.

NewsRescue– A veteran obstetrician and gynecologist, by far one of the most popular and experienced hands in the field, Dr Jimoh Akanbi Gafar of Midland Fertility Clinic Ilorin, Kwara state, and also of Eyitayo Clinic, and a lecturer in the University of Ilorin, has been arrested for running a major false pregnancy scam on his patients.

According to sources, his operation came to the open when a patients husband insisted he wanted to witness the Cesarian section delivery of his “fortunately term-pregnant” wife. Dr Jimoh then allegedly said the case needed prayers as some spiritual event was taking command of events, and it appeared “the baby had disappeared”.

Allegedly Dr Jimoh has been running this false, Iatrogenic pseudo-cyesis scam for several years on his unsuspecting patients.

According to the case, what he does is, he pretends to have given them In Vitro Fertilization (IVF), and then he doses them on constant hormonal therapy to cause cessation of menses.

The patients now feel they are pregnant and carry on like this for the 9 month course of the supposed pregnancy, attending clinics and being tested by Dr Jimoh and his cronies in his center who make them believe all their tests are positive and normal for the period.

Point to note, these are very desperate patients who have struggled to conceive for years. In Africa, being able to bear children is almost an obligation and women are unfairly punished by the society  if unable to give birth to a boy, and to any child at all. Hence, what Dr Jimoh’s center promised was very lucrative, his procedures selling for a million naira ($6,000) a treatment.

The women were also more likely to psychologically exhibit the pseudo-cyesis, due to desperation and the influence of the hormonal therapy.

Now, here is where his second dirty trick comes in. At delivery, he recommends a Cesarian section, possibly citing some form of complication and then always declares a still birth.

According to the story, he had almost been caught in the past when a parent requested to see her dead baby. Dr Jimoh is reported to have brought out some dead fetus to show, after 24 hours delay.

Over the weekend, the latest couple upon hearing his fabulous claim of the baby “disappearing via voodoo”, were said to have stormed his house and brought him out with serious lynching. At this point certain neighbors got involved, the word spread and gradually several women came out reporting similar experiences under his care. This culminated in his arrest and detention.

An old patient of his even told our NewsRescue staff, that in her case, several years ago when she failed to get pregnant, Dr Jimoh had secretly advised her to simply bring another mans sperm to his clinic for him to use to inseminate her, and her husband will never be the wiser.

If these allegations are true, it can just be imagined how many atrocities he might have committed over the years, many with living evidence. Not surprising his record of “achievement”.

According to his clinic website, Dr Jimoh has far and wide experience and has written numerous papers in international journals. Though this is yet to be confirmed.

He has offered his services in Gabon and Guinea as a consultant in Obstetrics and Gynaecology. He has written over fifty (50) scientific articles published in reputable journals (both local and international). He is well traveled especially for conferences, workshops and seminars.

As the case has proceeded, 3 of his victims narrated their cases to the Kwara police commissioner. Dr Jimoh was allegedly defending himself with medical jargon, and claiming that sonologists make errors.

The commissioner of police has delayed any release of the suspect, pending a thorough investigation, citing the additional murder case.

Dr Jimoh in his police report is also prime suspect in the murder case of one of his staff nurses.

According to the case, Dr Jimoh had performed a C/S the day of her death. He had requested she tell the patient that he had removed a dead fetus as was his usual scam. But the late nurse refused, citing the fact that she was about to get married and have babies and will not lie. The nurse allegedly disappeared that day, and was found dead some days later, not too far away, between the hospital and her home.

At present, the case is being investigated and a jail cell is what is pregnant with “used-to-be” Dr Jimoh, the fertility expert of Ilorin.

Update: Dr Jimoh remains innocent till proven guilty in the court of law

We advice the Kwara police to be diligent in their conduct of duties, under God, the eyes of man and the press.