Israeli efforts to prevent FIFA from debating and possibly censoring it for allowing soccer teams from Jewish settlements in territory occupied since 1967 to play in Israeli leagues are complicated by the fact that Mr. Trump has called on Israeli Prime Minister Benyamin Netanyahu to freeze settlement activity.

Mr. Trump has expressed unconditional support for Israel and has sharply criticized a resolution in December in the United Nations Security Council that condemned with acquiescence of the Obama administration Israeli settlement policy. Mr. Trump, who has made achieving Israeli-Palestinian peace one of his foreign policy goals, nevertheless advised Mr. Netanyahu on an official visit to Washington earlier this year that settlements “don’t help the process.”

The settlement issue is likely to again occupy centre stage when Palestinian President Mahmoud Abbas meets Mr. Trump in Washington in early May in advance of the FIFA congress in Bahrain. In a rare official Israeli visit to a Gulf state, representatives of the Israel Football Association (IFA) will be granted visas to Bahrain, a country with which Israel has no diplomatic relations, to attend the congress. 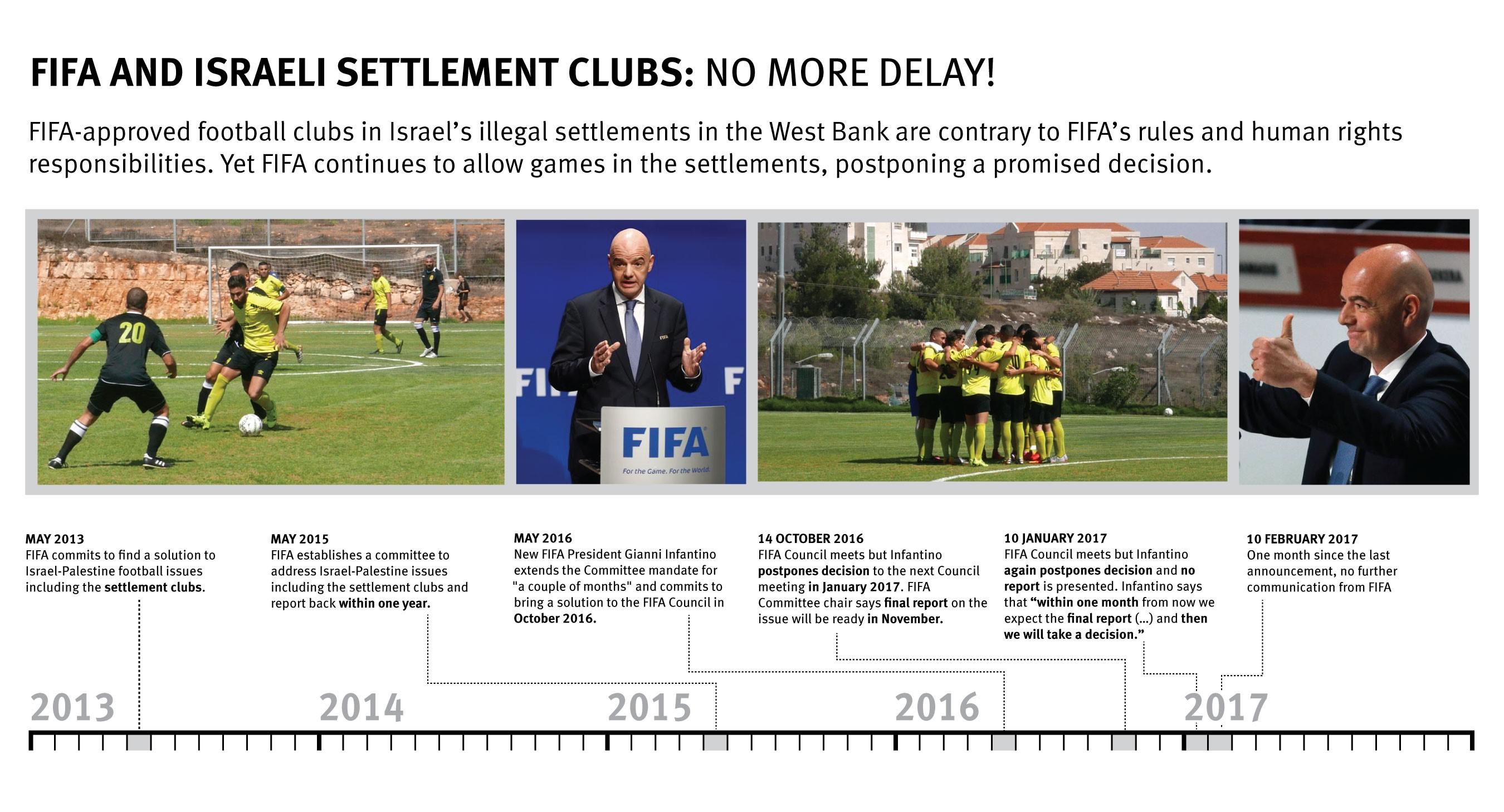 Israel has in recent years succeeded in thwarting repeated Palestinian efforts to get its membership in FIFA suspended. FIFA, in a bid to prevent a situation that would put it in a tight spot at a time that the US Justice Department is prosecuting a number of its senior officials on corruption charges, last year appointed South African anti-apartheid icon Tokyo Sexwale to negotiate a solution.

Mr. Sexwale proposed three options, all of which are unlikely to provide relief. Mr. Sexwale reportedly initially suggested that FIFA could take the legal risk of throwing in the towel, give Israel six months to rectify the status of the disputed clubs, or continue to attempt to achieve a negotiated solution. Mr. Sexwale, under pressure from Israel, dropped any reference to a suspension of Israeli membership. In advance of submission of Mr. Sexwale’s report to FIFA, Israel is seeking to ensure that any references to punitive action against the Jewish state are removed.

The Palestine Football Association (PFA), human rights groups and a coalition of sports associations, trade unions, and faith based groups are pressuring FIFA to act against Israel. The groups charge that the participation of settlement teams in Israeli competitions violates FIFA rules, FIFA’s adoption of United Nations Guiding Principles on Business and Human Rights, and international law that sees Israeli settlements as illegal. FIFA’s bylaws bar any country from setting up teams in another country’s territory, or letting such teams play in its own leagues without the other country’s consent.

Israeli Foreign Ministry communications with its embassies abroad suggest that Israel fears that it may be able to avert the Jewish state’s suspension by FIFA but is unlikely to completely avoid punitive measures against it.

“Our growing assessment is that the FIFA Congress is liable to make a decision on suspending six Israeli teams that play over the Green Line, or even on suspending Israel from FIFA. We urge you to contact your countries’ representatives on the FIFA Council as soon as possible to obtain their support for Israel’s position, which rejects mixing politics with sport and calls for reaching an agreed solution between the parties … and to thwart an anti-Israel decision if it is brought before the council,” the Foreign Ministry said in a cable. The Green Line constitutes the line that divides the West Bank from Israel proper and demarks territory occupied in Israel during the 1967 Middle East war.

Ironically, the cable spotlights the fundamental problem underlying a lack of integrity in international sports governance: the ungoverned relationship between politics and sports. International sports associations and governments maintain a fiction that sports and politics are separate even if the two are inextricably joined at the hip. The cable serves as evidence of how governments and associations use the fiction of a separation to corrupt the integrity of sports.

The relationship of sports and politics is equally evident in Palestinian soccer. The PFA is headed by Jibril Rajoub, Palestine’s sports czar, secretary of the central council of Mr. Abbas’s ruling Al Fatah group, and a former security chief who spent 17 years in Israeli prison.

Mr. Rajoub recently weakened the PFA’s battle with the IFA by repeatedly refusing in a debate in New York with an Israeli peace negotiator to condemn Palestinian attacks on Israeli Jews. Mr. Rajoub has praised in recent years a wave of knife attacks on Israeli soldiers and civilians.

FIFA may well attempt to buy time by adopting Mr. Sexwale’s option to give Israel six months to rectify the situation. A FIFA congress decision to that effect would however effectively constitute a defeat for Israel because it implicitly acknowledges that allowing West Bank teams to play in Israeli leagues constitutes a violation of FIFA rules as well as international law.

While Israel is certain to reject the notion, a six-month grace period would also buy Israel time to further counter the growing Boycott, Diversification and Sanctions (BDS) movement that seeks to penalize Israel for continued occupation of the West Bank. Israel has made countering BDS one of its foreign policy priorities. The Netanyahu government recently emulated Mr. Trump’s disputed ban on travel to the United States from six majority Muslim country by banning BDS supporters from travel to Israel.

FIFA’s groping with the Israeli-Palestinian conflict is likely to serve as a bell weather of international attitudes towards Jewish settlement at a time that many members of the international community are exasperated with the policies of the Netanyahu government, the most right-wing in Israeli history. It is also likely to put the Trump administration’s support for Israel to the test.