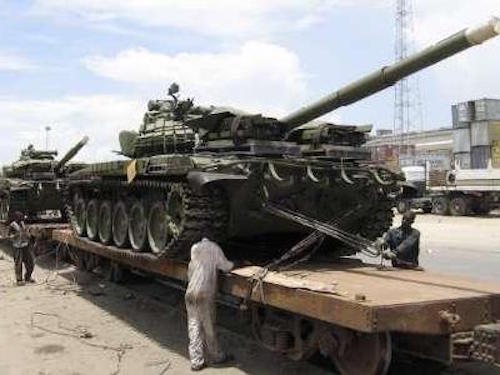 Nigeria’s military is acquiring new and second-hand hardware for all three branches of service as it battles Boko Haram insurgents on land and maritime insecurity and piracy in the Gulf of Guinea.

Over the last couple of years, Nigeria has received armoured vehicles, small arms, combat aircraft and large and small naval vessels, among other items, from mostly Asian and Eastern European suppliers. It has also domestically manufactured and assembled small arms and armoured vehicles and refurbished and upgraded aircraft with foreign assistance.

For example, according to the Stockholm International Peace Research Institute (SIPRI) Arms Transfers Database, Nigeria last year produced 10 Streit Cougar armoured personnel carriers (APCs) under license as the Igirigi. The Igirigi is assembled by the Nigerian Army Engineering Corps and was initially thought to be a wholly indigenous design.

Canada last year also delivered 10 Spartan Mk 3 armoured vehicles ordered in 2013 and this year is delivering 20 Inkas Light Armoured Patrol Vehicles (LAPVs), which will most likely be used by the Nigerian Army. Nigeria has for some years operated various Inkas armoured vehicles, which have seen service with the police, army and VIPs. Inkas Armoured has been operating in Nigeria since 2008 and has a sales office and workshops in the country.

The Nigerian Army is being re-equipped in an effort to combat Boko Haram insurgents and has been bolstered by armour from the Czech Republic, which is delivering four BMP-1 infantry fighting vehicles to Nigeria this year, together with six RM-70 122 mm self-propelled multiple rocket launchers and at least four T-72M1 tanks. These are all second hand vehicles ordered in 2014. The tanks were first seen being flown to Nigeria in January this year.

It is not clear how many tanks Nigeria will be getting from the Czech Republic – in August 2014 Hungary announced it had sold 58 T-72s to Excalibur Defence Limited, which transferred them to the Czech Republic which in turn began transferring some to Nigeria.

In 2009 Nigeria ordered 48 Springbuck armoured personnel carriers, which were delivered between 2010 and 2014 to the police. The contract includes local assembly in Nigeria, which is ongoing. According to SIPRI, the police in 2013 took delivery of four BTR-3E APCs from the Ukraine, which in 2014 also supplied five BTR-4 infantry fighting vehicles.

Regarding small arms, Bulgaria in 2013 exported 50 light machineguns to Nigeria while Serbia exported 1 500 pistols, 2 270 light machineguns and eight mortars, according to the United Nations Register of Conventional Arms. In January this year the Nigerian ordered 1 000 Beryl assault rifles from Polish company Fabryka Broni Lucznik. Apart from imports, the Defence Industries Corporation of Nigeria (DICON) produces small arms and ammunition for the Nigerian Army and other security agencies.

China continues to be an important supplier to Nigeria. In addition to two P-18N offshore patrol vessels, ordered in 2012 under a $42 million deal, China is delivering 120 Poly Technologies CS/VP3 armoured personnel carriers, 30 AR-1 anti-tank missiles and five CASC CH-3 unmanned aerial vehicles. SIPRI data says the CH-3s are armed, presumably with the AR-1 missile. Photos recently emerged of an armed CH-3 that had crashed in what was supposedly Nigerian territory in late January.

Air support has played an important role in finding and attacking Boko Haram militants and their camps and this too has been boosted by recent deliveries. Russia has supplied numerous aircraft to Nigeria, including three Mi-35M/Hind Es in 2014, six armed Mi-171Sh transport helicopters in 2012, six Mi-35M combat helicopters in 2013 and 12 Mi-171Sh helicopters in 2014.

Further arms acquisitions are planned for Nigeria, with President Goodluck Jonathan pledging support for the military. Last year Jonathan sought approval for a $1 billion loan to improve the Nigerian military as it combats Boko Haram, which has killed thousands and abducted hundreds since the group launched its violent campaign for a breakaway Islamic state in mid-2009, threatening the stability of Africa’s biggest economy and top oil producer as well as that of the entire region. However, recent gains have been made with the assistance of Nigeria’s neighbours, notably Cameroon, Chad and Niger, who have also been affected by Boko Haram’s activities along their borders.

Apart from the Boko Haram insurgency, the Nigerian Navy is tasked with safeguarding its oil assets offshore and in the vast Niger Delta. Security experts from the International Maritime Bureau say the waters off Nigeria are now the deadliest on earth, surpassing Somalia on Africa’s east coast, which gained notoriety due to months-long hijackings, high-cost ransoms, and US-led rescue missions. Several crewmembers have been killed in recent months in attacks on tankers off Nigeria.

Earlier this year it emerged that there are foreign military advisors, believed to be from South Africa and the former Soviet Union, advising and instructing the Nigerian military and maintaining its new hardware. The appearance of foreign private security contractors comes four months after Nigeria’s ambassador to the United States said Washington was not helping the struggle against Boko Haram, and had failed to share intelligence and sell Nigeria the weapons it needed. Nevertheless, it appears Nigeria still plans to take delivery of the former US Navy survey ship John McDonnell, while its allies make use of United States-supplied intelligence and equipment