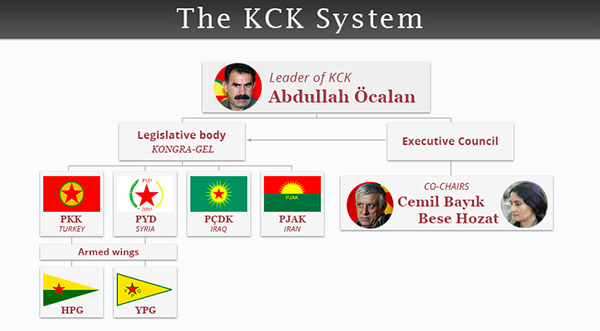 America’s armed forces have long been known to be providing arms and military and logistical support for the military wing of the Democratic Union Party (PYD), the branch of the Kurdish PKK terrorist organisation active in Northern Syria. The so-called “People’s Protection Units” are better known as the YPG. Most recently, US military transport planes deposited 50 tons of military equipment in the YPG-controlled Hasakah region in October. CNN, which documented the event, carried a report stating that US officials had confirmed this.

Yet since they were aware of Turkey’s objections, the same officials issued a statement distorting the aim behind this aid. Colonel Pat Ryder, a spokesman for the US armed forces, said that they were certain that the military aid in question had been received by the Syrian Arab Coalition, and went on to say, “We are sensitive to some of the concerns that our Turkish partners have. This was not an air drop to Syrian Kurds.”1

The fact is, however, that immediately after this military aid had been dropped from the air, PYD Joint-Chairman Salih Muslim confirmed that it had been given to his group: “Fifty tons of arms have been sent to us and groups allied to us. This is the beginning. More arms will follow.2″ [Emphasis added.] It is also known that the Hasakah region where the weapons were dropped is under the joint control of the PYD and Assad regime forces. The other day, CNNreported the following in a piece about the construction of an airport to facilitate such air deliveries: “There are regime pockets in towns like Qamishli and Hasakah, redoubts blocked by street barriers and watched over by giant posters of Syrian President Bashar Al-Assad and his late father Hafez. But the Kurds are the dominant military force in this region.”3

The recipients of the 50 tons of military equipment dropped on Hasakah are clear. The aid was given, not to opposition groups or Syrian Arabs, but as always to the YPG, the military wing of the PKK terror organisation in Syria.

Attempts are, of course, made to legitimise military backing for the YPG by making baseless claims, such as, “The YPG is different from the PKK”; “It is not a terror organisation”; and “It is the most effective group fighting Daesh on the ground.” The fact is, however, that the PYD and YPG are nothing other than names used in Syria by the PKK, which has for decades been on US and EU terror lists. Abdullah Öcalan is their permanent leader. Salih Muslim was brought in from Qandil to head the PYD on direct instructions from Öcalan. The co-chair, Asya Abdullah, is usually found residing in Qandil. Their commanders and militants are posted by the PKK.

Moreover, without listing hundreds of pieces of evidence that would take up far too much space in this article, Robert Ford, the US ambassador to Damascus up to 2014, himself said that the PYD is indistinguishable from the PKK. Ford, one of the most influential figures in US policy on Syria, said the following in an interview with Al-Jazeera last October: “As to its relationship with the PKK, American officials will say ‘PYD is not officially linked to the PKK’. I think it’s just nonsense that they say PYD is not PKK. This is a verbal defence which they are not serious with. It is one of those things that you say that is not true and everyone knows it.”4

Furthermore, the alleged “fight” of the YPG against Daesh is nothing more than a pretence. The YPG has never really fought directly or made any achievements against Daesh on ground. The only thing it has done so far, has been to provide the coalition forces with the coordinates of the Arab and Turkmen villages it is targeting, although the group claims that they are locations used by Daesh to invite air strikes to the area. Following the bombardments, the YPG goes in to loot those villages, and kill any surviving Arabs or Turkmens so that there will be no resistance to its occupation and advances towards Afrin, which it hopes will complete the Kurdish corridor. If it wasn’t for the support provided by the coalition air strikes, it would only be a matter of time for the PYD (YPG) to be completely eradicated in the region.

Nevertheless, even if the YPG was actually fighting successfully against Daesh, who can ever claim that it would be moral, ethical or legal to support a bloody terrorist organisation that has martyred 40,000 innocent people in Turkey since 1980, in the hopes that such support would stop another terrorist organisation? Every year, human rights organisations publish voluminous new reports documenting violations against Arabs, Turkmens and dissident Kurds by the PYD through massacres, torture, exile, detention and assimilation. Indeed, only last year, Human Rights Watch published two reports about the inhumane practices of the PYD; Amnesty International published a similar report in 2015 as well.

Moreover the group is now collectively called the Syrian Democratic Army, after joining forces with the Syriac Military Council, Burkan Al-Firat, Suwar Al-Raqqa, Shams Al-Shamal, Lîwa Al-Selcuki, Brigade Groups of Al-Jazira — which Salih Muslim calls “our allies” — but is not related in any way whatsoever to the opposition in Syria that defends itself from the regime. Some of these other groups share the PYD’s communist and Stalinist ideologies and do the YPG’s bidding as the latter loots and kills its way towards the completion of the Kurdish corridor. Their real duty, though, is to provide a legal basis for the arms supplies to the YPG and play a part as a legal front under the name “Syrian Democratic Army”.

As one would expect, when it became clear that most of the weapons and supplies delivered to the YPG were dispatched to PKK militants in Turkey, it was the last straw for the government in Ankara. Following shots being fired in Turkey by the YPG on 12 February, the Turkish army fired artillery at the PYD/YPG lines at Azez, and at Aleppo, in line with its rules of engagement. In the meantime, the only response of the YPG has been a series of cowardly terrorist attacks. It is actually unbelievable that the PYD thought it could intimidate the Turkish army or the police with terror attacks on innocent people in Ankara.

The PYD/PKK have ideologies which reject all religious and moral values, and are known for their violent opposition to the proponents of such values, in complete rejection of the concept of freedom of thought. For this reason, it seems very unlikely that a Kurdish state rejecting the cultural fabric of this geographic region — which is the birthplace of and home to many religions — can survive at its core.

The PKK-PYD’s incessant desire to spread its ideology in Turkey and then across the region through anarchy and terror — violating human rights and moral values along the way — suggests that its terror can turn into a serious threat for the entire region. It is clear, therefore, that allying with such a dangerous organisation for the sake of political, economic and strategic interests and working to make it settle down as a satellite state in the middle of the Islamic world would be an extremely serious mistake. For the sake of everyone’s common interests, this option should be abandoned at once.