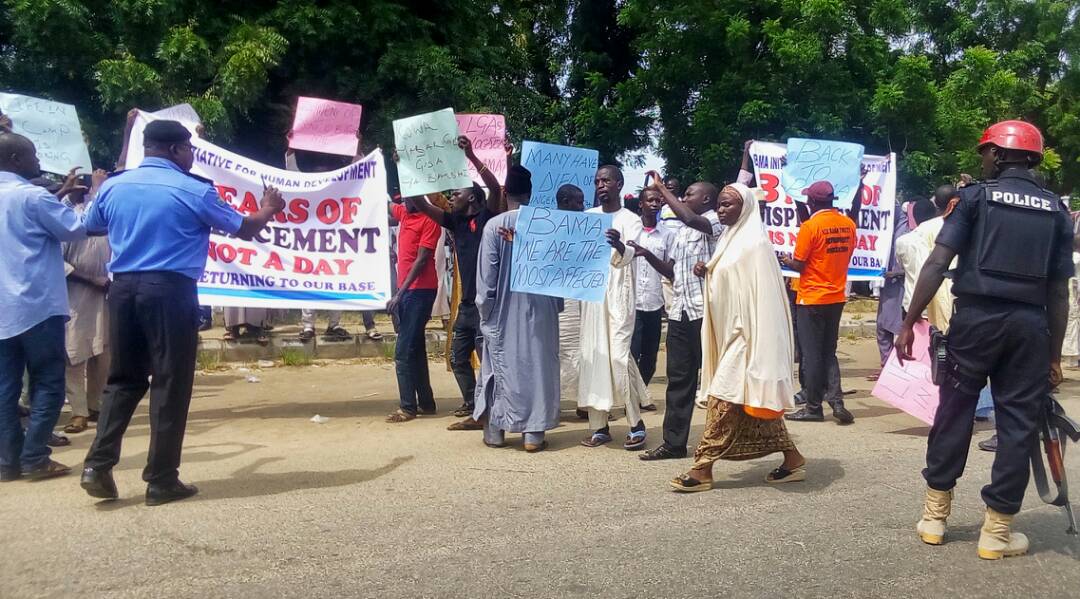 In a letter dated September 27, Bama youths under the aegis of Bama Initiative for Human Development wrote to United Nations High Commission for Refugees and Amnesty International against the Nigerian Police Force for what it described as “illegal and unjust arrest” of its members.

Following protests by Bama IDPs on September 24 that they would return to their homes, Borno state command of the Nigerian Police Force arrested and charged to court twelve persons in relation to organizing the protests for incitement and disturbance of public peace.

Sitting in Wulari Magistrate Court on Monday September 25, Hafsat Baffa, the magistrate, ordered that they be remanded in prison till October 23 even as they filed for abail.

Many people condemned the arrests and detention, while others appealed to relevant authorities to release.

However, it seemed the organisation was left with no other option than to petition the international organisations for intervention.

“We the members of Bama Initiative for Human Development (BIHD) write to petition you on the illegal, illegitimate and unjust detention of our members who were on a patriotic mission to peacefully protest for our return to our ancestral land of Bama”, the letter, signed by Mohammed Shuwa and Abba Bukar Abba Masta, read.

The letter cited the reason the IDPs are agitating to return to their homes, reminding the organization of the government’s claims in the news media to clearing Boko Haram.

‘It is well documented that various IDP camps lack basic amenities that would guarantee for comfortable living conditions for human beings which led to spread of diseases and other vices.

‘Sir, you will recall also that the Nigerian military and the federal government of Nigeria has continually been in the news too stress that the insurgents have been driven out of not only Bama but in the state and the entire North East’, the petitioners wrote.

They said that the IDPs embarked on the journey ‘not with any intention to commit suicide or embarrass the government’, but, they continued, ‘to join efforts to rebuild their ancestral home’.

The letter also added that members of the association were shocked when police arrested their leaders and kept them in detention without bail despite being peaceful and their compliance to the police’s instructions to withhold the journey.

They called on the UNHCR and Amnesty International to intervene in what they describe as ‘illegal, illegitimate and unjust’ arrests, noting that they are law-abiding citizens and not rebelling against the government.