On December 19th Boko Haram terrorists attacked rtd. colonel Hussaini Monguno’s house in Borno. The brave soldier sent out SOS messages to the military and Civilian-JTF who came and saved him and captured the terrorists. The pictures of captured assassins went viral on the media the next day. [See: http://www.lindaikejisblog.com/2015/12/photos-one-of-gunmen-who-attacked.html]

When in December, the Buhari government announced the “technical defeat” of Boko Haram, not just Hussaini Monguno who had just survived a live assassination attempt by the terrorists for his activism, but the entire local and global media discredited the reckless claim that was demonstrably in Party and not national interests. Boko Haram attacked Maiduguri for a first time in months a few days later during Christmas, as if to let the world know the Nigerian army had not repented its (lying)ways. Boko Haram has since launched a second deadly attack at Dalori, outskirts of the capital, killing no less than 300 Nigerians and burning many alive in one of its most brutal attacks in history.

Colonel Hussaini Monguno’s “crime” has been that he, just like me and you, rejected the false announcement of a “technical defeat” of Boko Haram in the best interest of the lives of the people of Borno. Col. Monguno who had just fallen victim to the terrorists trying to silence him, fell victim to the Nigerian army who arrested him shortly after he made a media statement on February 13th criticizing the military’s counterinsurgency claims and strategies in the bleeding northeast.

Monguno was perplexed about the verified unnecessary lies from the military which put his people’s lives in jeopardy. Monguno personally knew people who had died inside Maiduguri during the December 25th attack that the Nigerian military denied happened. He personally knew soldiers who had died in the 105 victims ambush that the military claimed never occurred. He himself had just been a victim of Boko Haram assassins after all, for the things he exposed. 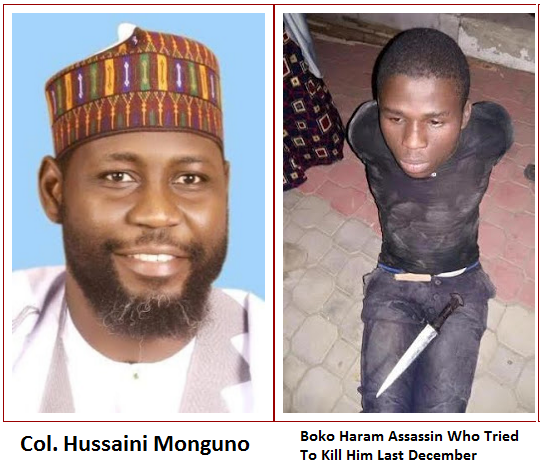 Army Chief T. Y. Buratai felt uncomfortable with this popular son of Borno who, like some of us, was very instrumental in bringing “Change” with his many articles and campaigns against the Jonathan government. [See: Omojuwa.com-President Jonathan and Nigeria’s many security breaches – Hussaini Monguno, June 2013] Buratai wanted him to shut up even though he and his were at risk of death. The Nigerian army would literally rather he die than criticize and comment. An order was given for the DSS to pick him up. Col. Hussaini Monguno who was whisked away by agents of Nigeria’s security service over 10 days ago and has since been held incommunicado. He has joined the growing list of “kidnapped” Nigerians, locked-up without charge and denied legal and family visitation. One must ask, did the military chief want the Boko Haram assassins to kill him? Why is the military finishing up the job Boko Haram started and towing their path, locking up their very enemies? The Zaria “confrontation” which left hundreds of Muslims dead and missing, that similarly happened two weeks after Boko Haram bombed their parade in the same Zaria, also followed the same frightening pattern.

No one knows where Monguno is and whether he is dead or alive. His family are scared stiff. A recent report by AP described how the Nigerian military allegedly whisks people away and their dead bodies are later found. We pray this is not his fate.

We reject the message that we either Stand With Buhari in everything he does or we are arrested. We believe in constructive criticism in national interest and in the best interest of Buhari, especially where our lives are at risk. The #IStandWithBuhari campaign is there already doing all that can possibly be done, with billboards all over Abuja to help promote Buhari for 2019. What more can this government desire? The new government must tolerate criticism and must not stamp out anyone it dislikes with brute force, extrajudicial detentions and massacres.

16) Why the people of Borno are not coming out and telling their story to the world beats me. What are they waiting for?#BringBackOurGirls

3. When the SSS sends emissaries to threaten that you do not make noise, you tend to be afraid. #FreeHussainiMonguno https://t.co/Jce8yjiff0

The government should embrace honesty and be proud of the truth and its truthful achievements and not promote lies and a false sense of infallibility. No one believes Buhari is a god or tasks him as such. Why are we rewarding lies and incarcerating the truth?

It is not poverty but injustice like this that is the root of Boko Haram and other extremist terror. Nigeria has had enough. It is time to build bridges, not dig graves.