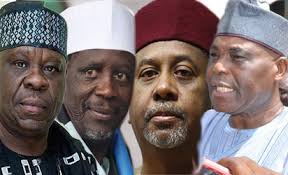 ABUJA — The special team raised by the Chairman of the Economic and Financial Crimes Commission (EFCC) to probe the disbursement of $2.2 billion arms contract deal in the office of the former National Security Adviser, yesterday, confronted the major suspects with evidence of their illicit transactions.

The 27-member task force, which has Ibrahim Magu as a member, spent most part of the day to grill the suspects and asked them to speak up on any aspect of the transactions where their names or those who allegedly fronted for them, appeared.

The extended questioning of the high profile suspects, our correspondent learned, was to prepare the ground for their arraignment this week.

However, Vanguard could not obtain a specific date of the week when the suspects are likely to be docked and the specific charges to be pressed against them.

It was gathered that the commission had outsmarted the key suspects by first securing a court order to detain them beyond the stipulated 48-hour threshold, thereby making it more difficult for their lawyers to secure their early release.

A top source said most of the suspects, who had earlier attempted to deny their involvement in the arms deal, were dumbfounded when confronted with concrete evidence of all the transactions they had made in the office of the ex-NSA.

“Many of the suspects, who were claiming ignorance of collecting huge sums of money from the office of the ex-NSA, were tongue tied when we brought them to face each other. I think they will soon appear in court to tell the world why they went to the ONSA to sign and collect huge sums of public money that was not meant for the purposes they were given,” an EFCC source said.

Vanguard learned last night that the EFCC was making  efforts to charge the suspects to court so as to free its holding facilities for more suspects who are to be taken up for massive looting of public funds in the last dispensation.

The cells of the anti-graft agency in Abuja are said to be almost overwhelmed with suspects arrested and detained in connection with the arms deals, for which the Presidency has vowed to press to a logical conclusion to prove to Nigerians that many top Nigerians looted the public treasury under the guise of buying arms and ammunition to fight terrorism.