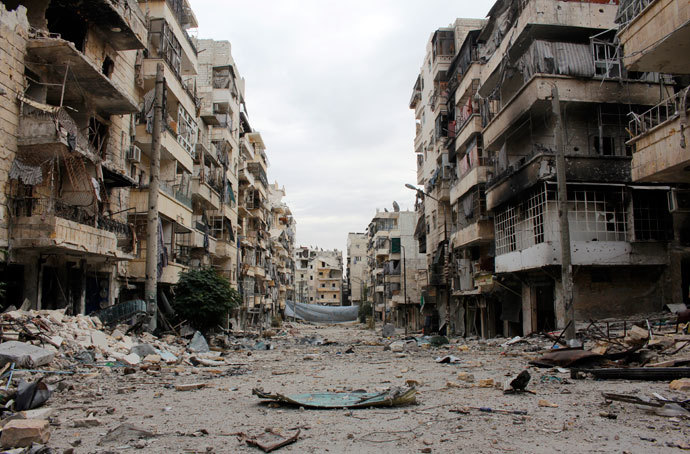 After six and a half years of civil war in Syria, the necessary steps for peace and settlement still haven’t been taken. One of the most problematic regions of this war, where hundreds of thousands of people have lost their lives and millions more have become refugees, is Idlib Province, which is located in the north of Syria and is also a close neighbor to Turkey. It is estimated that over one million Syrians are living in the province today.

Idlib has been subjected to endless bombardments, including a chemical attack in April 2017. In recent months, the heavy conflicts among the opposition caused a control shift in the region. As always, those who are tormented the most by these conflicts are the civilians, meaning women, children and elderly. The alliance between Iran, Turkey and Russia is extremely important for the resolution of the problem in Syria. The common basis of this league is the protection of Syria’s integrity. While this alliance is created, the parties involved made a point of not excluding the United States. However, a significant part of US policies on Syria, especially the arming of the PKK/YPG, contradicts both with the rightful demands of this alliance and the will of the Syrian people.

Idlib is one of the regions where the Sunni population lives. Al Qaeda’s Syrian branch Al Nusra’s dominance in the region under their new name Jabhat Fateh al-Sham, brought up concerns about US intervention. In January 2017, the Al-Nusra Front announced that they had merged with some other dissident groups close to them and started to operate under the name Hay’at Tahrir al-Sham (HTS). The Bab al-Hawa Border Crossing located across the Cilvegozu of Hatay is also under its control.

The alliance of Russia, Iran and Syria is considering a formula that will enable Idlib to be rescued by the forces of the Syrian regime instead of a rescue operation supported by the US in the region.

Idlib is also neighbor of Afrin, which is controlled by the PYD, the Syrian extension of the PKK terrorist organization. An autonomous canton has been declared in Afrin by taking advantage of the turmoil in the region. The PKK/PYD seeks to get hold of Idlib and make it part of a communist independent Kurdistan that will extend to the Mediterranean, to exile all the Arabs and Turkmen in the region and to keep the region under the control of their dictatorship.

Human Rights Violations of the Terrorist Organization PKK in Syria

One of the biggest reasons why the war in Syria has turned into a conundrum is the fact that certain terrorist organizations were supported against the others. This grave mistake has turned Syria into an area of ​​reckoning for these bloody organizations. The fact that the PKK, the most brutal terrorist organization in the Middle East, which has killed nearly 40,000 people, was supported with weapons, ammunition and military training has further increased the severity of the situation. The PYD used its newly obtained power to brutally oppress the local people. Even though the human rights’ violations of the PYD were constantly released to the public, no sanctions have yet been imposed against this terrorist organization.

On September 2015, Mr. Paulo Pinheiro, the Chairman of UN Independent International Commission of Inquiry on Syrian Arab Republic, stated that the YPG (one of the military units of the PKK/PYD) has also plundered and destroyed some regions in Syria, and thus underlined the fact that there is no difference between the PKK/PYD and Al Qaeda or DAESH.

The Syrian Human Rights Organization has reported and presented to the public many times that in all the regions the PYD declared cantons in, it destroyed and plundered both Arab and Turkmen villages and towns, forced thousands out of their homes, carried out massacres, intimidated people with arbitrary arrests and even forcefully assimilated the Kurdish opposition.

Establishing a “Safe Zone” in Idlib

At the 2017 Astana Talks, which initially commenced with Turkey and Russia as guarantors and in which Iran was later included as a guarantor, the Syrian regime and the opposition were brought together and a ceasefire was declared in the country.

In the fourth session of the Astana Talks held in May, decisions regarding the future of Idlib were made. In these talks, it was decided to create “de-escalation zones” in Idlib and its environs, the northern rebel-controlled parts of the Homs, the eastern Ghouta region of Damascus and the Daraa and Quneitra districts in the south. The control of these ‘de-escalation zones’ was given to Turkey.

Turkey does not want an operation carried out by the US through the Syrian extension of the PKK terrorist organization in the region, or an operation by Syrian regime forces that will cause massive civilian casualties due to heavy bombardments. It is obvious that war, destruction and the deterioration of the integrity of Syria would be the outcomes of both cases. By the same token, the existence of the HTS is something Turkey doesn’t approve of. The primary goal of Turkey is to wipe out all terrorist organizations in the region and then to create a safe zone for the civilian population.

The de-escalation is to be achieved step by step, and region by region, through a very difficult process in Syria, where conflicts spark rapidly and cause enormous losses. In order to accelerate the steps taken for peace, it is imperative that the countries effective in the region act not only by looking out for themselves, but by thinking about the people and the post-war order. For that reason, instead of insisting on their own policies, they need to follow a rational, self-sacrificing, flexible policy for peace. Turkey took a positive and exemplary step in this regard by changing her initial politics pertaining to Syria.

A similar step must be taken by other countries active in Syria, especially by the USA. The USA must completely stop providing lethal aid to the PKK and halt its policy of “supporting some terrorist organizations in order to end the domination of another terrorist organization” that they have tried in different regions in the past and achieved nothing but failure every time.

Recent history is full of examples of terrorist organizations that grew stronger locally, only to cause trouble for the whole world including those who have helped and raised them. While trying to put an end to DAESH, the image of a new communist dictatorship established by the hand of the PKK right in front of the eyes of the whole world will cause new major threats in the near future.

If the goal is to ensure peace, in all sincerity, then this will only be achieved by bringing together the communities of different ethnicities, different sects, different religions and philosophical beliefs on the common grounds and by putting love, sacrifice, embracement to the forefront.

This can only be realized by putting the experience of making it possible for different ethnic origins and different sects to coexist in peace in the concerned lands for ages into practice. So it is absolutely crucial that the cooperation of Russia, Turkey, Iran and the Syrian regime prevails with contributions from the USA, who should immediately stop providing ammunition to the PKK.