In the most gruesome video which went on for  minutes, his gay partner is first seen alive, tied, and then he stabs him over 40 times in the abdomen and legs, then slices him. 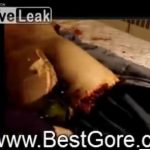 The psychopath then cuts of the legs and brings some canine to lick the blood up and tear at and eat some flesh from the amputated limbs.

He brings a fork and knife and uses it to slice and peel off chunks of flesh from the buttocks, possibly to eat.

Magnotta then brings a bottle and for some minutes rams this up the limbless mans posterior orifice.

It then appears he has some form of necrophiliac sex with the limbless deceased.

Magnotta finally poses in a cat pose for the video cover.

Music is heard playing all through his gory clip.

It is by far the most inhuman video in history and the lowest level of human behavior. 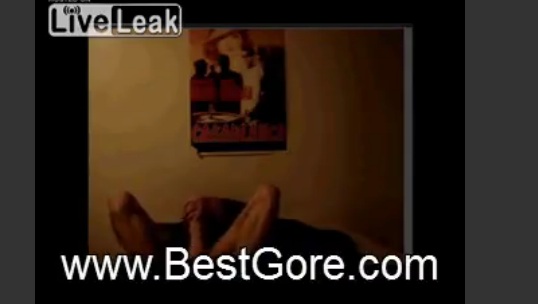 In a 2007 interview on Naked News as reported by CNN, Magnotta described his ‘fun’ life as a global traveling male escort, meeting many influential people.

He called himself a ‘peoples person’, and his own boss, selecting his own work hours and being paid handsomely for his prostitution services.

Magnotta was also known for his online kitten killing activities.

He was arrested Monday in a cyber cafe in Berlin after a several day global hunt.

Aka 1 Lunatic 1 Ice-pic video, BestGore website who first got the video are being investigated by Canadian authorities. The video was actually released earlier than May 25, before Luka Magnotta was known as the perpetrator and became wanted.

Very hard to find, the 1 Lunatic 1 Ice Pick Video took the internet by the storm as the most horrific shock video to have been released to date. There are speculations that One Lunatic One Ice Pick may be an actual snuff film – produced by some crazy psycho who was paid to murder a person and film it on camera. Though as with everything that starts going viral on the internet, the chances of the reality being blown out of proportions are quite substantial. As a result, it’s quite possible that 1 Lunatic 1 Ice Pick is not a snuff film at all, but rather a home made recording of a psychopath who filmed his sick deed on camera the same way thousands of other murderers did, utilizing whatever technology allowed at the time.

Some people say that the 1 Lunatic 1 Ice Pick Video was produced in San Francisco, USA, others say it’s work of some crazy, 20 year old Russian who got paid 6 figures for it. To give his clients their moneys worth, the 1 Lunatic 1 Ice Pick Video contains murder, beheading, dismemberment, cannibalism and necrophilia (it doesn’t appear as though castration took place in this video, though).

The 1 Lunatic 1 Ice Pick Video is filmed in a dimply lit room. A naked male is seen tied to a frame of bed while his captor stabs him in the abdomen with an ice pick. The victim is them seen with his throat slashed as his captor proceeds to slowly slice various parts of his body with a knife.

Later in the video, the victim is entirely decapitated and the captor uses his kitchen knife to cut into the muscles and dismember one limb after another. The murderer plays with severed limbs and even rubs his crotch area with them. It must have turned him on because the next thing he does is flip the dismembered, decapitated corpse on its front and fuck it in the ass from behind.