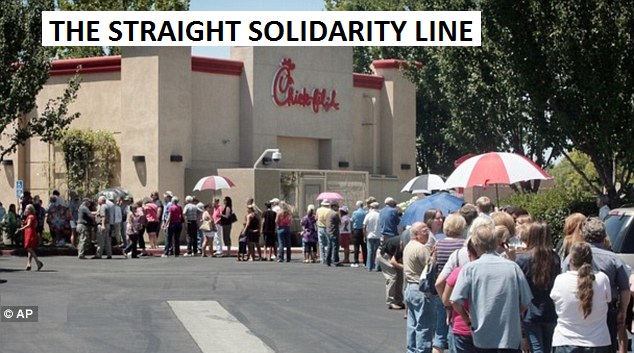 The war over chicken sandwiches escalated today as gay rights advocates revealed plans for a ‘Same Sex Kiss Day’ at Chick-fil-A to counter the hundreds of thousands of people who lined drive-through lanes and filled dining rooms at the restaurants across the nation on Wednesday.

The fast food chain said it enjoyed record-setting sales thanks to ‘Chick-fil-A Appreciation Day,’ which seemed to achieve its goal of backing the company’s ‘Christian principles’ by asking supporters to vote with their feet and their dollars.

Liberal groups are furious at the fast food chain after CEO Dan Cathy was quoted as saying he supports the ‘biblical definition of marriage’ and that the United States was ‘inviting God’s judgement’ by supporting gay marriage.

Conservatives, including top politicians and pundits like former vice presidential candidate Sarah Palin and Fox News commentator Mike Huckabee, have rallied to the defense of the company — citing concerns over freedom of speech and freedom of religion. In your face: Gay rights groups are hoping to combat yesterday’s Chick-fil-A Appreciation Day with a same-sex kissing protest at stores across the country Supporters: This scene, people standing in long lines to patronize a Chick-fil-A in Fresno, California, was played out at the chain’s restaurants across the nation

Waiting: The drive-through lane in Huntsville, Alabama, circles the parking lot twice hundreds of people waited for their turn at a chicken sandwhich

Huckabee’s Chick-fil-A Appreciation Day was a wildly successful national movement — with nearly 700,000 people pledging to attend on Facebook. Photos emerged from across the nation — from Texas to Colorado to California and Chicago — of patrons waiting for hours to support the company.

‘It’s gone beyond anything I could have imagined,’ Huckabee, a former Republican presidential candidate, told Fox News.

‘Every one of (the stores) that I know have reported record, historic sales yesterday… A lot of the stores ran out of chicken before the end of the day.’

Chick-fil-A says it had nothing to do with planning the rally that brought customers to its stores in droves, but it appreciated the business.

‘We are very grateful and humbled by the incredible turnout of loyal Chick-fil-A customers on August 1 at Chick-fil-A restaurants around the country,’ the company said in a statement.

It added: ‘While we don’t release exact sales numbers, we can confirm reports that it was a record-setting day.’

Gay rights groups like the Gay and Lesbian Alliance Against Defamation are firing back on Friday by encouraging gay couples to ‘show Chick-fil-A thanks for their support of Love, Equality, and the Real Definition of Marriage!’ by smooching at the restaurant and photographing the evidence.

Organizers don’t recommend eating at Chick-fil-A and are encouraging their supporters to visit Kentucky Fried Chicken. Show of faith: A pair of nuns were photographed walking out of a Chick-fil-A on Wednesday loaded with food, milkshakes and iced tea Competition: A Wendy’s franchise owner in North Carolina had several of his stores post support for Chick-fil-A on their marquee signs

A 20-year-old gay man and self-described liberal supporter of President Barack Obama, made a surprising announcement when he revealed he would continue eating at Chick-fil-A.

The man, who gave his name only as Matt, wrote in a column for CNN iReport that ‘Cathy has been unfairly attacked for his statement that he doesn’t support same-sex marriage.’

He argues that Cathy has a right to his opinion and  he respects Chick-fil-A for closing on Sundays out of principle.

Matt writes that when gay rights activist ‘push on anti-gay people and organizations to change their minds and opinions via bullying or forced involvement,’ the results will not be favorable.

‘I’m a gay man. I love Chick-fil-A as a place to get good tasting food. I do not support their beliefs and disagree with their funding of groups that are well known to be anti-gay activists. Personally they have never treated me any different as a gay man and I will continue to do business with them so long as that holds true,’ he writes.

Despite their efforts, the protest is unlikely to come close to matching the impact of Chick-fil-A Appreciation Day — only 11,000 Facebook users have said they plan to attend ‘National Same Sex Kiss Day.’

Not all gay people support the boycott, though. A 20-year-old gay man, who said he is a liberal who supports President Barack Obama, wrote a piece for CNN iReport in which he defended Cathy’s right to oppose gay marriage.

The man said he planned to continue eating at Chick-fil-A because he thinks the reaction of gay rights groups has been overblown — and their southern-style chicken sandwiches taste good, too.

As opponents regroup, Chick-fil-A is finding even more supporters — including the owner of competing fast food restaurants.

Jim Furman, the biggest Wendy’s franchise owner in the world, posted ‘We stand with Chick-fil-A’ on the signs outside several of his restaurants in North and South Carolina, reported WBTV in Charlotte.

The Wendy’s corporate office issued a statement distancing the company from Mr Furman, saying ‘we are proud to serve customers of varied races, backgrounds, cultures and sexual orientation, with different beliefs and values.’

Mr Furman took the signs down after speaking with Wendy’s officials.

Roman Catholic Cardinal Francis George, the leader of the Archdiocese of Chicago, also sided with Chick-fil-A when he criticized Chicago Mayor Rahm Emanuel for blasting the company’s anti-gay marriage stance.

The mayor said the chain’s values ‘are not Chicago’s values’ and said he did not welcome plans to build additional restaurants in Chicago. That opinion was shared and repeated by the mayors of San Francisco and Boston, as well.

Emanuel’s words, along with a vow by Alderman Proco ‘Joe’ Moreno to block any expansion in the city, drew Cardinal George’s ire.

‘I was born and raised here, and my understanding of being a Chicagoan never included submitting my value system to the government for approval. Must those whose personal values do not conform to those of the government of the day move from the city?’ he wrote on the Chicago Archdiocese blog on Sunday.

A church spokeswoman said the cardinal was standing up for ‘religious freedom’ and that he has long spoken out against same-sex marriage.

Cathy, the son of the company’s founder, was quoted in a Baptist newspaper on July 16 saying he was ‘guilty as charged’ when asked about his opposition to gay marriage.

He later told a Christian radio show: ‘I think we are inviting God’s judgment on our nation when we shake our fist at Him and say, “We know better than you as to what constitutes a marriage,” and I pray God’s mercy on our generation that has such a prideful, arrogant attitude to think that we have the audacity to try to redefine what marriage is about.’

Cathy says Chick-fil-A isn’t a Christian company — however its stores are all closed on Sunday, even in airports and shopping malls, and his company biography says the purpose of his business is to ‘glorify God by being a faithful steward of all that is entrusted to us.’ Opposition: Gay rights supporter Trey King stood outside the Chick-fil-A in Hollywood, California, on Wednesday with a rainbow flag to protest the chain’s opposition to gay marriage Chick-fil-A also puts its money where its mouth is, donating $5 million to Christian groups between 2003 and 2010.

The company supported groups like the Family Research Council, which lobbies Congress on a host of conservative social issues — including the prohibition of gay marriage.

Chick-fil-A, a $4.5 billion company, has made the Cathy family very wealthy. Dan Cathy, who runs operations, owns one-third of the family business — making him a billionaire.