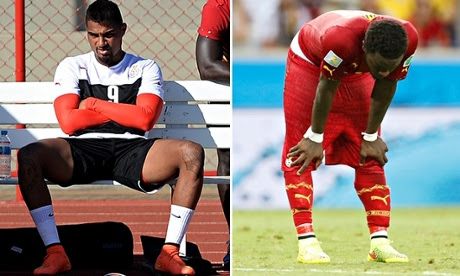 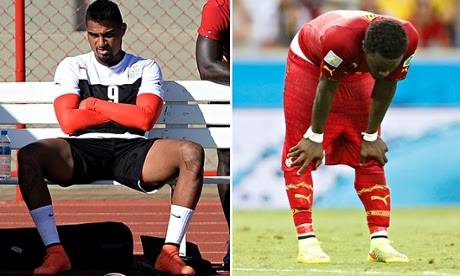 Hours after a cash shipment arrived in Brazil to avert the squad’s threatened strike action over unpaid fees, Ghana’s FA released a statement to confirm that Muntari had been suspended for what they alleged was “an unprovoked physical attack” on an FA executive committee member. Muntari is yet to comment.

The statement read: “The Ghana Football Association has suspended Sulley Ali Muntari indefinitely from the Black Stars with immediate effect.

“The decision was taken in the wake of his unprovoked physical attack on an Executive Committee member of the GFA and a management member of the Black Stars, Mr Moses Armah on Tuesday 24 June, 2014 during a meeting. Muntari’s accreditation for the 2014 World Cup has been withdrawn with immediate effect.”

Boateng, meanwhile, was also suspended indefinitely for what the FA said were “vulgar verbal insults” aimed at the team’s coach, James Appiah, during training. Boateng confirmed he had been sent home, but denied the charges, telling the German magazine Sport-Bild: “Sulley Muntari and I were just joking around, and the coach stopped the session and sent us back to the changing room.

“Afterwards I went to him and asked what he had against me and he started yelling. He insulted me. There were words like: ‘Fuck off.’”

Boateng said he “absolutely accepts” his suspension, but added: “No one should think I insulted the coach. I’m travelling now, and I wish my colleagues all the best for the match against Portugal.”

The row over player fees had led to players refusing to train on Tuesday, prompting Ghana’s president, John Dramani Mahama, to send a plane containing £1.76m to Brasília for the players to share.

The deputy sports minister, Joseph Yamin, told Ghanaian radio station Citi FM that the players had “insisted” on cash payments, adding: “The government had to mobilise the money and a chartered flight to Brazil.”

Appiah admitted ahead of the Portugal game that he had been suffering sleepless nights over the disputes within the squad, saying: “I can’t even close my eyes.”