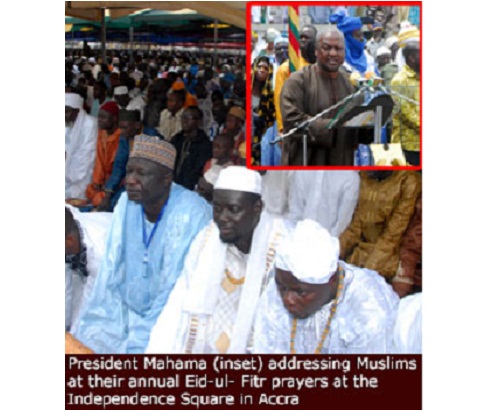 NewsRescue- During the Ghana Eid El-Fitr celebrations this Sunday, held in Accra, Ghana, the Chief Imam Nuhi Sharabutu in his sermon, touted the nations extreme atmosphere of inter-religious tolerance, cooperation and coexistence on the backdrop of a comparatively intolerant neighboring Nigeria which has a similar religious divide.

Appreciating the way that Ghana’s Muslims and Christians have for centuries lived in peace, while also advising them to remain steadfast and not flow treacherous examples. The Nations new president, John Dramani Mahama, also in his speech, celebrated the atmosphere of tolerance; both speakers cited numerous examples and advised continuity.

Here is an article on the event from a Ghana daily:

Don’t Allow Yourselves To Be Used As Hoodlums- President

President John Dramani Mahama yesterday advised Muslim youth not to allow politicians to use them as political hoodlums to terrorize their opponents in campaigns leading to the December General Election. “If politicians come to you to be their ‘macho’ men tell them to go somewhere else and also let them know that Muslim youth were not born to be used as political thugs,” President Mahama advised.

He gave this advice when he addressed Muslims at their annual Eid-ul- Fitr prayers at the Independence Square in Accra.

The Eid-ul-Fitr is the climax of a month-long Muslim fast, which gives the leadership of Islam the opportunity to interact and unite with the youth, the poor and all Muslims from all walks of life.

President Mahama said Islam stood for peace and unity and there was the need for the youth to eschew negative tendencies that undermined the peace and stability of the country.

The President commended Muslims throughout the country for praying for the soul of late President John Evans Atta Mills, who represented peace, honesty, modesty, integrity and unity as a political leader of Ghana.

“If the belief of Muslims that anybody who dies in the month of Ramadan will go to heaven is anything to go by, then I can confidently announce here that late President John Atta Mills is already in Heaven.”

He used the occasion to thank Muslims in Ghana and beyond for contributing meaningfully before, during and after the final funeral rites of the late President, saying, “I was particularly delighted when the National Chief Imam said a prayer at his funeral mass, and Maulvi Wahab Adam was also at his grave to say prayers.”

President Mahama appealed to Muslims to continue to uphold the peaceful co-existence between Muslims and other major religious groups in the country as that was a useful block that could put the house together.

He explained: “During President Mills’ burial, I was also very delighted, when the Most Reverend Charles Palmer-Buckles, Catholic Bishop of the Accra Arch Diocese, assisted Maulvi Wahab Adam when he felt dizzy and was taken to the hospital.

“Bishop Palmer-Buckle did not only hold the stretcher, but also sat in the same ambulance that took the Ameer to the hospital, and this to me was a demonstration of peaceful co-existence, which you cannot get anywhere in the world.”

Alhaji Gado Mohammed who read a message on behalf of Sheik Nuhu Sharabutu, National Chief Imam, called on rich Muslims to share their wealth with the down-trodden to earn them more blessings.

He appealed to them to guard against utterances that could plunge the country into social disturbances and confusion.