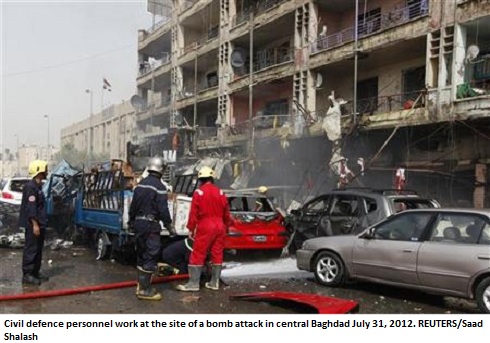 NewsRescue– The global sponsorship of terrorists in Syria, has led to an increase in terror activity in neighboring Iraq, according to experts.

Recently the president of America Barrack Obama, revealed the US is providing financial and tactical support to these terrorists, as defined by many observers, many of whom are external agents organizing the so-called ebellion in Syria.

We recently published this article on a typical example, al-Mahdi al-Harati, who was recruited from Ireland to overthrow the Libyan government, and now recruits Sunni “terrorists” from Libya to fight, reportedly for juicy stipend, in Syria.

In recent attacks in Iraq, there have been recorded the highest terror related deaths in recent years. The foreign elements, mercenaries, reportedly being chartered and sent in to Syria through Turkey, who do not care about what is destroyed in Syria, not having any commitment to Syria, are apparently utilizing the opportunity to cross into Iraq and wage terror on the people in that nation too.

BAGHDAD (AP) — A bomb attack and a drive-by shooting against security forces and government employees in and around Baghdad killed five people and injured five others on Sunday, police and health officials said.

The town, about 30 miles (50 kilometers) south of Baghdad, was a former insurgent stronghold from which attacks on Iraqi security forces and nearby Shiite areas had been launched.

Another police officer said that in Baghdad’s western Jihad neighborhood, gunmen in a speeding car killed two employees at the so-called Sunni endowment, a department that supervises Sunni religious administration including holy sites and mosques.

The two dead were neighbors leaving their houses in a car when the gunmen showered them with bullets.

Two health officials in nearby hospitals confirmed the causalities. All officials spoke on condition of anonymity as they were not authorized to release the information.

Violence has ebbed in Iraq, but insurgents frequently attack security forces and Shiites in an attempt to undermine the government’s authority.

The al-Qaida statement claimed 70 people were killed in the July 31 attack on the security headquarters. Government and security officials put the death toll for all the violence that hit the capital that day at 21.

In a statement posted Monday on a militant website, the Islamic State of Iraq, al-Qaida’s Iraqi branch, said a group of “believers from the Sunni people” attacked a unit that is part of the pro-Iranian forces in the country. Iran is a regional Shiite powerhouse.

The militant group also claimed responsibility for 27 shootings and other attacks on government and security officials from June 17 until July 20.

A medic at a nearby hospital confirmed the death toll. Both officials spoke on condition of anonymity because they are not authorized to talk to reporters.

Al-Qaida’s local wing has for years had a hot-and-cold relationship with the global terror network’s leadership.

Both shared the goal of targeting the U.S. military in Iraq and, to an extent, undermining the Shiite government that replaced Saddam Hussein’s regime. But al-Qaida leaders Osama bin Laden and Ayman al-Zawahri distanced themselves from the Iraqi militants in 2007 for also killing Iraqi civilians instead of focusing on Western targets.

Generally, al-Qaida in Iraq does not launch attacks or otherwise operate beyond Iraq’s borders. But in early 2012, al-Zawahri urged Iraqi insurgents to support the Sunni-based uprising in neighboring Syria against President Bashar Assad, an Alawite. The sect is a branch of Shiite Islam.