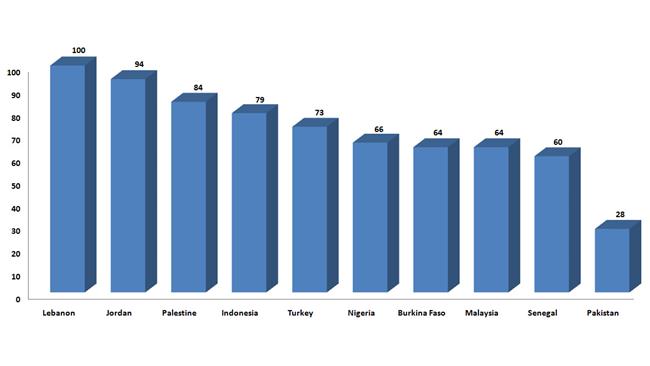 The results of a recent opinion poll suggest that nearly all people in Muslim-majority countries abominate the Takfiri Daesh terrorist group.

The survey conducted by the Pew Research Center in 10 Muslim countries shows all Lebanese without exception loathe Daesh Takfiris. Around 94% of Jordanian respondents said they hate the Takfiri terrorists. Some 84% of Palestinians expressed deep hatred of Daesh as well.

The majority of those polled in Indonesia, Turkey, Nigeria, Burkina Faso, Malaysia and Senegal also said they despised the Takfiri Daesh terrorist group.

Only in Pakistan, 28% of the respondents said they abhorred the terror group. Nevertheless, 62% of the Pakistanis polled did not indicate whether or not they hated Daesh, which shows their reluctance to respond to the question, not their interest in Daesh.

Daesh extremists currently control parts of Syria, Iraq, and Libya. They have carried out atrocious crimes in the countries, including mass executions and the beheading of people.

Daesh Takfiris are committing their crimes in the name of Islam. However, Muslims have disavowed the terrorist group, and announced that the crimes by Daesh have nothing to do with Islam.

This comes as Daesh continues to recruit militants from different countries.

On September 26, The New York Times quoted US intelligence and law enforcement officials as saying that some 30,000 militants from over 100 countries, including more than 250 Americans, had traveled to Syria and Iraq to join the ranks of Takfiri terrorist groups operating in the two countries.