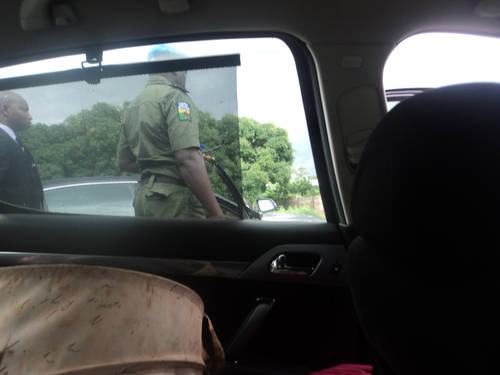 Governor Tanko Al Makura of Nasarawa State on Thursday gave a stern warning to Nigerian citizens about what they may expect from the era of the All Progressives Congress (APC): “Go to hell!”

The all-powerful governor was addressing a lady who had dared cry to him for help as police officers in his convoy brutalized her relatives and damaged their property right before his eyes. Lois Iorvihi’s crime was that her car had failed to get out of the way quickly enough as the governor approached.

Ms. Iorvihi was traveling through Lafia, the capital of Governor Makura’s Nassarawa, with her younger sister, Joi and their brother Jerry, on their way from Makurdi to Abuja.  On Thursday around 3: 00 PM Nigerian time, they enjoyed a smooth ride until arrival at Nasarawa-Eggon, less than 100km from the nation’s capital.

“If you are familiar with the road, just immediately after the bypass on that sharp bend where many souls have perished, a dispatch rider overtook her car and was crisscrossing in front of her instructing her to clear off the road,” they said in their account.

Before Ms. Iorvihi could react, she heard a loud siren from behind her. As she tried to steer away from the road, up came a Hilux pick-up van loaded with heavily-armed anti-riot policemen who shoved her car off the road. She was stunned but managed to bring the car to a halt in front of the valley.

Immediately she brought the car to a stop, four of the policemen, known in local circles as “Kill and Go” for their ruthless methods, descended on the car using the nozzle of their rifles to dent, perforate and scratch the body of her car.

In the passenger seat, her brother wound down his window and pleaded with the police officers to take it easy, drawing their attention to his stunned sister’s agitated state.

They responded by dragging him out of the car and then proceeded to beat him to a pulp with the butt of their rifles.

The situation worsened when they noticed that Joi had started to use her phone to take pictures of the proceedings.  They seized all of her phones, along with an iPad, and smashed all the devices on the road.

Lois, confused and hysterical, stood in the middle of the road screaming and begging.  “Is this fair?” she asked repeatedly.

As traffic began to build up on both sides of the road, someone called out to her, telling her, “Madam, their Oga dey inside that Jeep, go and beg him.”

Lois walked towards the heavily tinted SUV bearing the Nigeria Coat of Arms and the insignia of the governor. As she got within a few yards of the car, the heavily-tinted widow was brought down, obviously by someone who had had a generous view of the violence being perpetrated on citizens.

It was Governor Tanko Al Makura, the first citizen of Nasarawa State, but before Lois could open her mouth, the governor spoke, “Young girl, you are so rude. Look at how you’re dressed like a prostitute.”

Lois, who was wearing a gown that covered up to her knees, was incredulous.

In her agitated state, she fired back at Governor Al Makura, asking:

“How am I rude?  Is this fair? Is this why we voted for you? We did not vote for you so that your convoy will run us out of the road. Look at what your security men are doing? They are destroying my car, beating my brother to a pulp and smashing all our mobile devices just because we had the misfortune of driving in front of your convoy?”

APC governor Al Makura then told her what time of day it is: “You can take the case to wherever you wish or go to hell.”

Having thus pronounced judgment, he wound up his window.  His ADC, who was by then standing by the car window, pushed her away and re-entered the car.

Seeing his name on the tag on his chest, Lois called out to him: “Ringim!”

And he fired back at her in words that confirmed his principal’s arrogance: “Yes!  That is my name.  I am the governor’s ADC.  You can go to any length you wish.  We are equal to the task. We will handle you, rat!”

They zoomed off, leaving the Hilux van and its full load of brutal police officers to complete their sanctioned demolition.

They arrested Lois, Joi, and her brother Jerry and took them back to the Divisional Police Headquarters first to Nassarrawa-Eggon police station where an incident report was entered by the DPO and later  Lois and her siblings were taken to Lafia at about 5 pm Thursday.

There, Lois was accused of :

Following those events, they were detained until Friday morning and then released after Lois refused to write a letter of apology addressed to Governor Al Makura for “obstructing his convoy and being rude to him”.

The siblings returned home completely traumatized, wondering if their brutalization at the hands of a key operative of a political party just voted into power portends terrible things to come for Nigeria.

Jerry, in pain, continues to receive treatment.  His only offense is that he asked the policemen to take it easy with his sister who had inadvertently found herself driving in front of Governor Al Makura’s convoy.

Joi is depressed.  Not only were her phones and iPad smashed on the unforgiving road, one of Governor Al Makura’s policemen repeatedly used his jungle boots to stamp on the devices, jumping on them repeatedly to ensure they were destroyed beyond repair.

In their account of the incident, they repeated Lois’ cry on Friday: Is this fair?

They said: “Much as we cannot do anything, and Tanko Al Makura and his Rottweilers playing God has all the powers and teeth to deal with hapless citizens who obstruct his convoy on a Federal Highway, we must ask the question again and again, IS THIS FAIR?”

They reminded Nigerians: “Today it is the turn of Lois, Joi, and Jerry. Tomorrow it may be your turn. Remember injustice to one, is an injustice to all.”

And they are requesting Nigerians to spread the word about their experience.  “Share it widely, the convoy of Governor Tanko Al Makura and the Policemen attached to him are a beast oppressing motorists on the road.  Run for dear life when Tanko Al Makura is driving behind you!”

It would be recalled that two-time governor Al Makura, a founding member of the Peoples Democratic Party, defected in 2011 to President Muhammadu Buhari’s former party, the Congress for Political Change (CPC) after he had lost the Nassarawa primary election.  There, he won his first term.  The CPC became a key part of Nigeria’s ruling APC.

Lois, Jerry and Joi aimed their last line directly at a man who appears to have mistaken the votes of the citizens for the bullets of a coup d’etat: “Governor Al Makura SHAME ON YOU!” they wrote.  “BIG SHAME ON YOU!”

It is not the first time Mr. Al Makura convoy will be engaging in road accidents, in September 2012, a Hilux Pickup van in Mr. Al Makura’s convoy collided with a commuter bus killing 19 people including two police officers.

SaharaReporters requested from Governor Al Makura to send his account of the event despite promises to do so, his Chief Press Secretary, Yakubu Lamai, told our reporter he was not in the controversial convoy on Thursday, he promised to get back to us with the governor’s side of the story but had not done so as at the time of publishing this report.