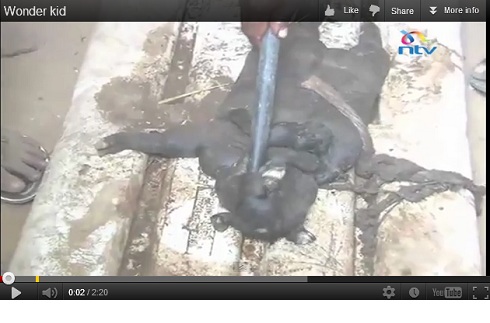 A goat giving birth is not uncommon and therefore hardly elicits much excitement among the people, but when a goat was born with features similar to those of a human being in Zamfara State the people could not believe their eyes. The incident happened in Anguwar Gwaza, in the state capital Gusau.

Weekly Trust reports that it was a big scene on Tuesday when the news broke as people trooped to the area in disbelief to catch a glimpse of the strange creature.

Our correspondent reports that the goat which was dumped at a strategic location in the area has what looked exactly like a human eye, ear and nose. When residents of the area noticed it, they went in search of its owner.

“We woke up to see the goat abandoned in that area. The first set of people who noticed the human feature in it drew the attention of other residents and we all went in search of the owner. Nobody came out to claim it,” a resident of the area told Weekly Trust in Gusau.

Head of Department of Veterinary, Pharmacology and Toxicology Department of the Usman Danfodio University, Sokoto, Dr. Bello Agai said the features were as result of congenital defect.

“It is just congenital defect which could be related to lead poisoning bedevilling the area. The way lead poisoning is causing defect in human being could be the same in animal and the case of the goat in question is not an exception.

“Of course other things could cause congenital defect, but only laboratory examination will determine the actual cause. We need to see the animal that is having the features, we need to see the goat that delivered it to examine them scientifically. As scientists, we just don’t attribute the cause of defection without scientific examination,” he told Weekly Trust via telephone.

Meanwhile, the Chief Imam of the Anguwar Gwaza Juma’at mosque, Ustaz Isah Maharazu, has described the development as a sign of the end times. He urged the people to repent and shun all activities that go against the teachings of Islam.