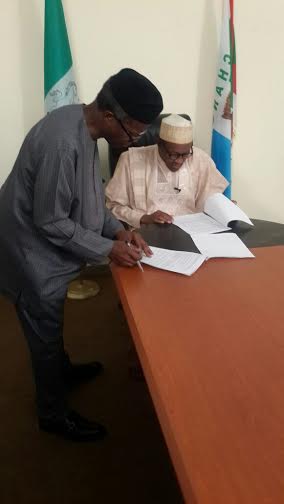 LAGOS — PRESIDENTIAL candidate of the All Progressives Congress, APC, has said that he would inherit a huge debt profile and empty treasury if elected president, expressing confidence that his wealth of experience would assist in turning the situation around.

He also stated that his party’s economic policies are conceived to be people-centred, adding that the country would for the first time in over three decades experience a truly pro-people Federal Government if elected.

Buhari said this in a statement by the Director of Media and Publicity of the APC Presidential Campaign Organisation, APCPCO, Malam Garba Shehu.

His words: “It is crystal clear that our revenues are dwindling by the day and if we must survive, we cannot continue on this path of near absence of accountability, mismanagement, outright waste and jamboree that has characterised the management of public resources under the Jonathan-led PDP government.

“We can assure the mass of Nigerian people that help is on the way. We know that an APC controlled Federal Government will obviously inherit a huge debt profile and an empty treasury from this PDP Federal Government. We are confident of turning the situation around.

“Unfortunately, all conceived palliatives applied to save the nation’s declining economic indicators have merely scrapped the surface of the problems leaving the mass of Nigerians desperate, confused and hungrier.

“With external debt standing at more than $10 billion and our internal debts at more than $50 billion, it is without doubt that President Jonathan is driving Nigeria into economic wilderness. This should be a cause for concern for all well-meaning Nigerians, more so when the Federal Government responses to these rising economic challenges have, at best, been casual.

“Emblematic of this casual, non profound approach to the management of the national economy is the Central Bank of Nigeria’s devaluation of the national currency in November 2014 while retaining the Retail Dutch Auction System (RDAS).\

“Dramatically, just under three months after that devaluation, the CBN, obviously buffeted by unanticipated dynamics in the foreign exchange market, announced the closure of the RDAS and the Wholesale Dutch Auction System (WDAS). This shows clearly an uncoordinated template in the management of the national economy.”