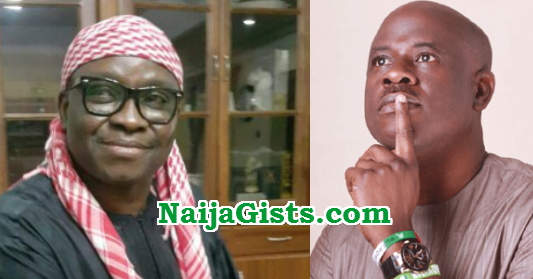 DETAINED former Minister of State (Defence) Musiliu Obanikoro yesterday made more revelations on how the N4.745billion wired to a company linked to him by the Office of the National Security Adviser (ONSA) was shared.

Fayose issued a statement yesterday, saying Obanikoro’s return from overseas was planned to nail him. He did not deny receiving money from the former minister.

Obanikoro told Economic and Financial Crimes Commission (EFCC) detectives that N3.880billion was allocated to Fayose and Sen. Iyiola Omisore out of the cash.

He also said he handed over $5.377m cash to Fayose at Spotless Hotel, Ado-Ekiti in the presence of the former Secretary of the Peoples Democratic Party (PDP) in the state, Dr. Tope Aluko, and other party stalwarts.

He reportedly demonstrated how Fayose collected the cash and put it “in the room next to where we were seated”.

The ex-minister, who made the disclosures during another round of grilling, said there were heaps of bank transfers to buttress his statement.

He said: “Out of N4.685billon transferred to Sylva McNamara Limited, N3.880billion was transferred to both Ayodele Fayose and Senator Omisore through cash and bank transfers.

“The dollars contents were handed over to Fayose personally by me in the presence of some party leaders and he collected it and took it to the room next to where we were all seated.

“The location where I gave the dollars to him is called Spotless Hotel, Ado-Ekiti. One of the party leaders that was present is Dr. Tope Aluko, who was then the secretary of our party, the Peoples Democratic Party (PDP).

“I transferred N1.7 billion to Omisore. The money was paid into his account and companies nominated by him. He gave the list of companies for the transfer of the N1.7billion that was released by the NSA to him.

“The funds were therefore transferred as prescribed by Omisore in full. That is to the account of the companies he provided. Details can be obtained from the bank that transferred the money.

“I, Musiliu Obanikoro, did not buy or sell any landed property from Sen. Omisore. The National Security Adviser, Col. Sambo Dasuki (retd) did not disclose to me what the funds were meant for and neither did I ask or I did not know the source of the funds.”

The former Minister however claimed that the balance of N785milion was used to wage war against Boko Haram in Lagos.

He added: “The balance of N785milion was used to prosecute the following: 1. procurement of souvenirs for the promotion of anti-Boko Haram insurgency in Lagos; 2. N200million for surveillance activities; 3. N200million and other remaining funds were for operations managed by Taiwo Kareem.

“Taiwo Kareem impressed the former NSA with his management of pre and post-election funds. To God be the glory, the two elections were carried out without any loss of life

“When bomb blast occurred in Lagos on the 25th of June 2014, the NSA was disturbed and told me of his commitment to ensure that such doesn’t reoccur.

“He expressed the grave consequence that the reoccurrence will have not only on Lagos but the economy of the entire country. He emphasized the need for local input to complement the activities of security agencies. This is how Sylvan McNamara was introduced.”

The EFCC obtained yesterday a court warrant to detain Obanikoro.

The anti-graft agency has also seized his passport to restrict his movement to the country.

A source said: “We have a valid warrant from the court to detain the ex-minister pending the conclusion of his interrogation by our team. He has a lot to tell us and we are keeping him in safe custody with comfort to enable him respond to the issues we have isolated for him.

“We have also seized his passport to restrict his movement to the country pending the conclusion of the ongoing probe.”

Aluko is believed to have made a statement to the EFCC.

Aluko had last year claimed that Obanikoro and Fayose clashed when the money ferried to Akure Airport was short of N80million.

He said: “The Presidency gave us security and money; the money was sent from a Diamond Bank branch through an account run by Sylvan MacNamara, a company owned by Obanikoro.

“My boss (Fayose) said he wanted to get his own in cash and that was why such a huge amount was ferried by plane. Obanikoro cannot claim not to have brought the money.

“He (Fayose) chose his man, Abiodun Agbele, to keep the money in a bank account. The transaction was not recorded and it got to a stage when it was discovered that the money was short by N80 million.

“This caused a crisis between Fayose and Obanikoro, who brought the money. He (Obanikoro) brought other things, apart from money, which I won’t disclose now..

”The cash carried in the plane was not entered into the manifest. It was delivered to a bank at 4.30 am in Ekiti. The remaining from the cash received for the election was used to buy a house in Abuja and the house belongs to Fayose.”