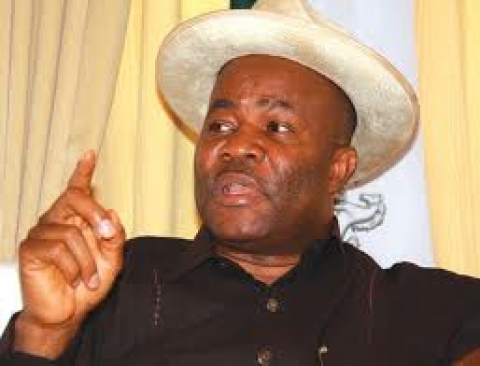 “Those who sow the seeds of dictatorship will be consumed by dictatorship”
(Late Chief Gani Fawehinmi, SAN).

Whenever the tragic story of the fall of the Peoples Democratic Party (PDP) and the historic defeat of President Goodluck Jonathan by the presidential candidate of the All Progressives Congress (APC), General Muhammadu is told, the name – Godswill Obot Akpabio, will feature prominently. Very few Nigerians really know the true character, history and proclivities Mr. Akpabio.

It is one thing for a person to be egoistic, despotic and belligerent. But it is an entirely different issue when a man who had long attained the age of majority and is occupying a high public office perennially behaves and incurably talks in a manner that calls his sanity to question. The Akwa Ibom State Governor, Godswill Obot Akpabio is clearly not insane but given his most recent outburst one is tempted to question his rationality.

On Tuesday April 1, 2015 Akpabio led some of his fellow governors elected on the platform of the Peoples Democratic Party (APC) on a consolatory visit to President Goodluck Jonathan on his defeat at the March 28, 2015 presidential election. In his capacity as the Chairman of the PDP Governor’s Forum ( a body which was birthed because of the undemocratic and egregious actions of Akpabio) Akpabio spoke to the media during which he was quoted  as saying among others:

“We as governors came to assure him (the President) that we are going back as field commanders to hold our states and that come April 11, PDP will still maintain its lead across Nigeria…

“The party has already indicated that it will explore all legal means in order to ensure redress. So, we are also proud of the party and we want to congratulate all our voters and all PDP faithfuls across Nigeria for their peaceful disposition…”

What was Akpabio thinking while making the above unguarded and baseless utterances? Shouldn’t there be an end to frivolities and irrationality? Akpabio should be informed immediately by whoever has his time of the upsetting wind of change that has swept away the monstrous imprints of the PDP from the Nigerian polity. It is puerile and clearly indefensible for Akpabio to boast that the so-called “field commanders” (PDP governors) will still maintain its lead across Nigeria.

Undoubtedly, Governor Akpabio is among the first five (5) individuals in Nigeria who’s negative, oppressive and selfish actions resulted in the shameful defeat of President Jonathan at the polls. Being himself a product of electoral malfeasance, rigging and corrupt political process, Akpabio thought that with or without the votes of the mass of the Nigerian electorates that Jonathan will win. Unknown to him, Nigerians had taken a decision to truncate the era of the locusts.

Contrary to the empty boast of Akpabio that the PDP governors will ensure that the PDP emerges victorious at the April 11, 2015 gubernatorial and States Houses of Assembly elections, the reality is that most Nigerians have rejected the PDP.

In Akwa Ibom State, Akpabio had manipulated the presidential election in favour of his party thereby giving a very false impression of the popularity of the PDP in the State. The truth of the matter is that there was no election properly so-called in Akwa Ibom State. Over 75% of Polling Units in the State had no election materials, especially result sheets. Results were reportedly written in the Government House. Videos and photos have emerged in the media showing how the election was rigged.

Interestingly, Akpabio reiterated that his party will be going to the Election Tribunal to challenge the outcome of the presidential polls. How are the mighty fallen! It will be very entertaining to see the PDP going to the Tribunal. Over the years, the opposition was insulted and maligned for seeking electoral justice by people like Akpabio.

Instead of talking arrogantly, Akpabio should be sober because his days of power are over. In the last 8 years of his oppressive reign in Akwa Ibom State, 3 Gs’ ( God, Godswill and Gun ) were the only source of power. Akpabio has demonstrated an uncommon hatred for any form of opposition. Today, his party, the PDP has been reduced by the Nigerian people to an opposition party. Akwa Ibom State cannot afford to be part of the opposition.

As a Senator-elect, Akpabio will be going to the Senate as an opposition Senator because the APC has won majority of the seats in the Senate. So in practical terms, Akpabio in few days time will become an insignificant factor in the affairs and politics of this country. That is the nature of power; flexible and ephemeral.

What I expect this wasteful governor to do now is for him to prepare to face trial for the massive looting of Akwa Ibom State resources. He should equally be getting ready to answer questions from the dock for the lives of innocent Nigerians that have been assassinated under his watch.

I do not see Akpabio escaping prison under General Buhari’s presidency. Indeed, there is no escape for him because the immunity that he is presently enjoying under Section 308 of the 1999 Constitution of the Federal Republic of Nigeria (as amended) does not apply to the Legislature.

Majority of Akwa Ibom people and residents are ready to reclaim their State from the monstrous grip of Governor Akpabio, his wife, family and cronies. If Akpabio thinks that he can use the Police and the Army to subvert the will of the people come April 11 then he is dreaming. Not anymore. Not now that the APC has taken over the leadership of the country.

As someone that is close to the grass root in Akwa Ibom State, I know that PDP’s chances of winning the gubernatorial election is very slim. The jubilation that erupted in the State following Buhari’s emergence makes nonsense of the so-called popularity of the PDP in the State. Akpabio today is fighting for political survival, but it is already too late for him.

Mr. Gabriel Achong, the Akwa Ibom State Commissioner of Police whose partisanship is visible to the blind and the embattled INEC Resident Electoral Commissioner in the State, Mr. Austin Okojie cannot save Akpabio this time. Any attempt to rig the forthcoming gubernatorial and State House of Assembly elections in the State will be resisted by the people.

Those planning to rig the elections should know that General Buhari will bring them to justice. Akwa Ibom State being the highest oil producing State in the country cannot afford to to be mislead by a drowning dictator to the opposition in view of the radical change in the political equation of Nigeria.

Come April 11, the battle will be between a drowning dictator and Akwa Ibom people. No Police, Army or corrupt INEC official can stop the wind of change that is coming to Akwa Ibom State. The days of political slavery – the days when Akpabio held himself out as a mini – god whose insatiable wishes were not subject to vetting are over. We are now a free people and there is absolutely nothing that 100 Godswill Akpabio of this world can do about it. The game is up.

Inibehe Effiong is the Convener of the Coalition of Human Rights Defenders ( COHRD ).