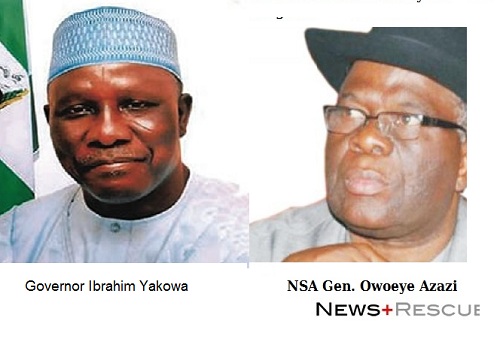 Governor Yakowa and Mr. Azazi, a retired military general who served as chief security adviser to President Goodluck Jonathan, were among passengers in the ill-fated helicopter.

Nigeria’s National Emergency Management Authority (NEMA) had earlier indicated that the agency had activated a search for a crashed helicopter.

Our sources had earlier disclosed that the crashed chopper was carrying “some major political figures.” As at the time of going to press, Saharareporters was unable to confirm the identity of any other passengers in the ill-fated chopper.

Governor Yakowa and Mr. Azazi were among many political figures who reportedly attended the burial of the father of senior presidential aide Oronto Douglas. The funeral event took place in the Nembe area of Bayelsa State earlier today.  SaharaReporters learnt that the crashed helicopter was one of several helicopters that some well-connected people to the funeral.

The crash comes on the heels of a plane crash on October 25, 2012 that has left Governor Danbaba Suntai of Taraba State brain-damaged. Mr. Suntai was moved to a hospital in Germany where he remains in poor shape, unable to recognize his visitors or to speak.

Presidential spokesman, Reuben Abati and a spokesman of the Nigerian Navy have confirmed the crash of a helicopter in the Nembe-Okoroba area of Bayelsa State that claimed the lives of Kaduna state Governor Patrick Yakowa and former NSA, Andrew Owoye Azazi this afternoon Nigerian time.

In his statement,  Mr. Abati disclosed that two Nigerian navy pilots as well aides of Governor Yakowa and Mr. Azazi also died in the crash.

Also, Commodore Kabir Aliyu  of the Nigerian Navy disclosed that a Navy’s Agusta helicopter crashed, even though he would not confirm the identities of the passengers who died.

The spokesman was willing to state only that the ill-fated Agusta helicopter “was conveying Very Important Personalities (VIPs) to Port Harcourt from Okoroba village.”

In his statement, the naval officer disclosed: “A Nigerian Navy Agusta helicopter (Helo 07) crashed today, Saturday 15 December 2012 at about 3:30 p.m. around Nembe-Okoroba area in Bayelsa State. The helicopter was conveying some VIPs to Port Harcourt from Okoroba Village also in Bayelsa State.”

Another military source told SaharaReporters that the helicopter caught fire on impact. The source disclosed that some of the passengers on board were burnt beyond recognition.

The Nigerian Navy had two helicopters at the scene of the burial of the father of presidential aide, Oronto Douglas. SaharaReporters determined that Governor Patrick Ibrahim Yakowa of Kaduna state and former National Security Adviser, Andrew Owoye Azazi, were on board the doomed helicopter.

A source told SaharaReporters that Mr. Azazi, a retired general, had invited Governor Yakowa to fly with him on the helicopter to the Rivers State capital, Port Harcourt. The governor’s flight was reportedly late in arriving in Yenogoa, the capital of Bayelsa State. From Sahara