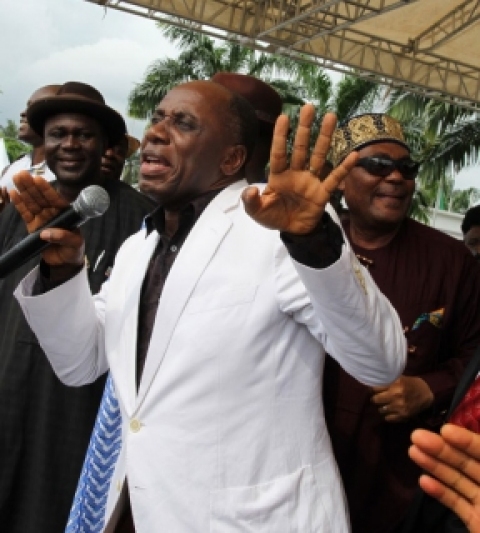 Rivers State Governor and Chairman of the Nigeria Governors Forum, Chibuike Rotimi Amaechi, said at the weekend that the Peoples’ Democratic Party (PDP) has already failed the leadership test in the country and needs not strive to be the custodian of leadership in the future.

For perhaps the first time since his defection to the All Progressives Congress (APC), the governor was explaining to journalists in Port Harcourt why he believes even more state governors will abandon the PDP and join the APC.

He accused the PDP of perpetrating injustice and promoting maladministration in the country. According to him, the APC was aggrieved by PDP’s poor performance, and if voted into power, would bring about the needed change nationwide.

He recalled the political pressure being brought on the state by the wife of the President, Patience Jonathan, whom he accused of attempting to ‘micromanage’ the state.

He also bemoaned the fact that President Goodluck Jonathan had failed to keep the promises he made to Rivers State after getting a huge electoral backing from it for his electoral victory in the last election.

Amaechi reiterated that he was in the APC to protect the interests of the state.

He told the journalists that despite his travails, he would continue the fight for change and good governance and accountability in the country.

He acknowledged that the APC was winning more support and membership in the country to signal the end to PDP’s dominance in Nigeria’s political scene.

He further urged Nigerians to embrace and tolerate religious freedom and play politics without ethnic and religious sentiment, stressing that politics based on ethnicity and religion as being canvassed in some sections of the country was unwise. He equally enjoined Nigerians to vote and protect their votes during election.

He expressed his disappointment and displeasure at the continued grounding of the state aircraft by the federal government, and the unwillingness by the Minister of Finance, Dr Ngozi Okonjo-Iweala, to sign off on a World Bank water project loan for the state.

The governor also decried the ceding of Soku oil wells to Bayelsa and another 41 oil wells in Etche, Rivers State to neighbouring Abia State.

“They don’t like Rivers State, they hate us”, he said, recalling that President Jonathan had brushed aside attempts by some interested foreign bodies to mediate in the crisis between the state and the federal government.

Former Lagos State Governor and APC National Leader, Bola Tinubu at the last APC rally in Port Harcourt said the APC was having a ‘broom revolution’ across the country and referred to Governor Amaechi as the “Wonder Boy”.